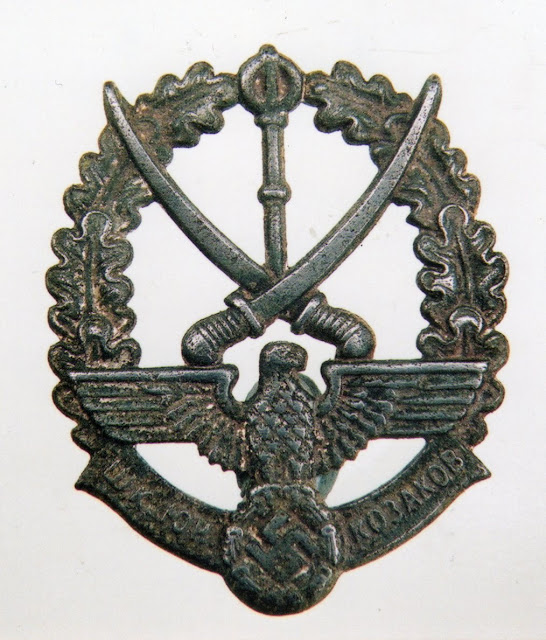 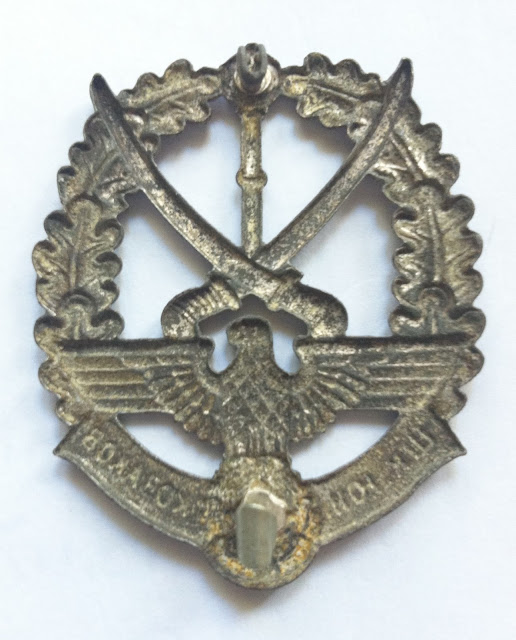 Young Cossacks Badge - Reverse.
This badge measures 52 mm high x 42.5 mm wide and comprises of a design that is produced in stamped sheet ferrous metal.  It is oval and formed of a partial wreath of single broad oak leaves, which have a raised fine outer edge line and a raised central field that has a raised vein.  Each leaf is slightly superimposed over the base of the next, obscuring the stalk and there are four leaves in each side.  The bottom portion of the wreath is formed from a flat fielded scroll.  Superimposed on to the scroll, with its wings outstretched, and superimposed over the lowest leaf on either side is the national eagle clutching a wreath of oak leaves with a swastika within it, in its talons.  The wreath just protrudes beneath the line of the scroll, splitting it in two.  From the top of the eagle's wings are crossed shashkas, Cossack sabres, with their blades superimposed across the wreath with their tips breaking the outer edge.  Between the blades and running up to the apex of the wreath is an Ataman's staff.  On the scroll, in raised cyrillic script, is the abbreviated inscription, 'W K. r O H.' on the left panel, and 'K O 3 A K O B' on the right, which translates to, Shkola Yunykh Kozakov and in English, School for Young Cossacks.

The reverse shows the negative impression of the obverse.  At the top, directly over the top of the staff, is a semi-circular piece of metal with a punch mark on either side soldered to the body of the badge.  These punch marks produce two nipples which act as the pivotal axis for the pin.  This is of drawn metal in the form of wire curled round with an extension, which forms the spring tension.  The curl is positioned so that its centre accommodates the nipples.  Soldered at the base is a piece of metal that has two scollops at the tip.  The other ends are then reduced and bent at 90ø and similar slightly reducing lines in the form of elipses return to the top, which is turned over to form a 'C'.  The returned tip is formed by a semi-circle and this produces the catch for the pin.  The badge is silver-plated.  There is, however, an example of the badge having a gilt wreath and scroll.  This may indicate that the badge exists in more than one grade.  However, under certain conditions silver can take on the appearance of gilt, due to the oxidising process.

This badge was to recognise graduates of the who had successfully completed their course.  This form of visible expression of graduation is common to many continental countries and could give rise to the issue of two grades, gold and silver.  It has been stated that the badge is believed 'not to have been issued'.  The actual example illustrated was obtained from a POW camp in where the recipient had been a prisoner and had made an attempt to conceal it.  It was subsequently retrieved when the camp was inspected.  The occupants of the camp were returned to the where they were savagely dealt with.  The repatriation became the inspiration of the book, 'Rabbit Pie'.  This award needs much more research as this is a particularly rare badge with very few original pieces being available to study.  Incidentally, the solid versions that are currently available on the collectors' market, often marked with a manufacturer, are reliably considered to be copies produced in newly liberated .

The school also had a cuff title which is green with silver lettering.  It is not known whether this was worn as a tradition badge after graduation.

An interesting photograph shows Dr. Josef Goebbels greeting a member of the Young Cossacks who served with the XV Cossack Corps at the front, wearing one in the company of four other Russian volunteers and three German officers.  The was finally removed from the east to .  The certificate that accompanied the badge is unknown to the author as is whether or not it was presented in a packet or presentation case. 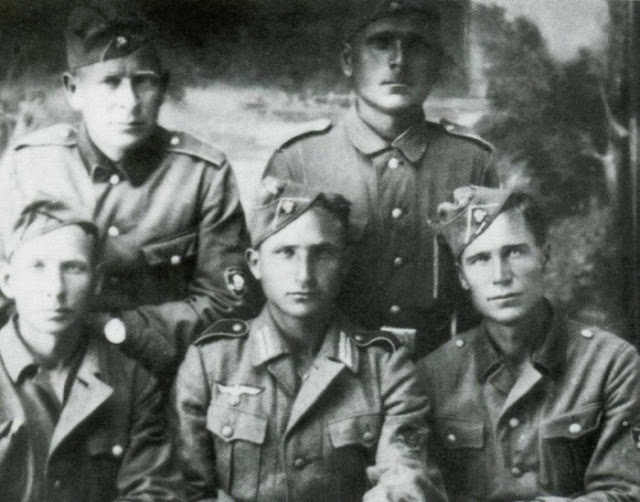 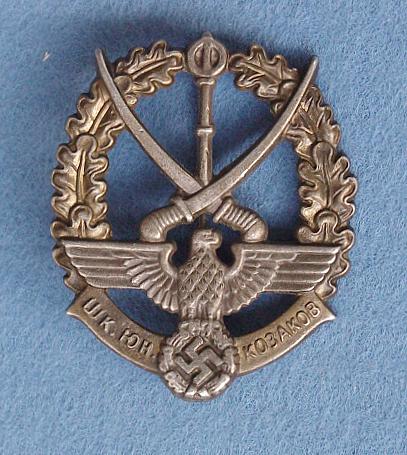 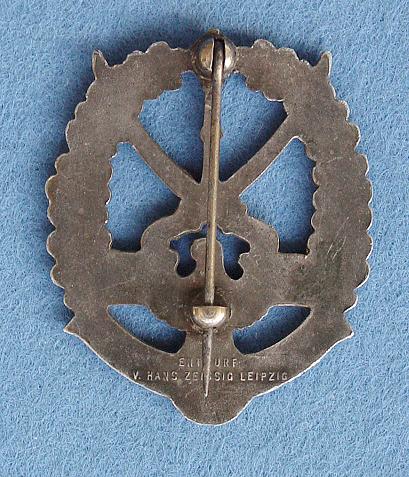 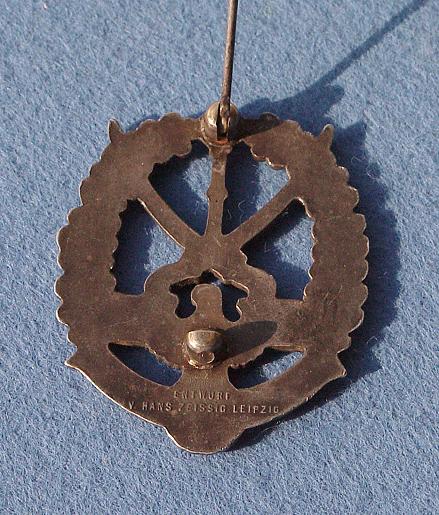 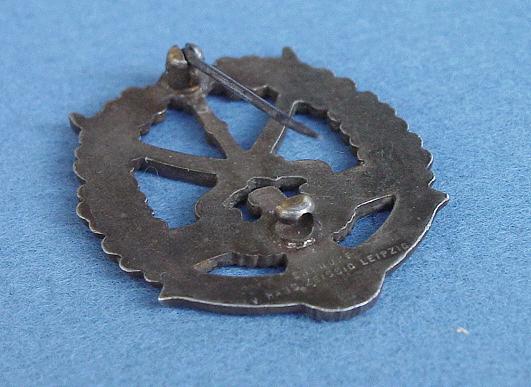 Posted by Christopher Ailsby at 09:42