The SA and SS Pilots Wings

The SA and SS Pilots Wings

This award consists of a pair of wings that were embroidered with silver wire, which was produced over a former.  The wire ran slightly diagonally on either side and it was split into three lines.  At the centre it had an early aluminium political cap eagle and on either side was embroidered a circle into which, on the left, was embroidered the SS runes with the SA logo on the right.  This was all done on a black or dark blue, Melton backing.  The size of the backing is 94 mm at the top and 80 mm at the bottom, with a height of 32 mm.  The wings themselves measure in the same relevant points, 80 mm and 70 mm, with a height of 20 mm.  The political eagle is of the short winged, early pattern and finely struck.  This is recessed into a space at the centre of the wings so that they meet flush to its outer edge line.  The reverse is covered with very fine paper linen.  These wings can also be found embroidered on to a tan backing instead of the black or dark blue Melton.

There is another example that took the form of stylised hand embroidered silver wings upon which was the SA monogram on the right and the SS runes on the left. In the centre the early pattern political eagle, also in hand embroidered silver wire. The design is all on a black Melton backing. The size of the backing is 78 mm at the top and 62 mm at the bottom, with a height of 20 mm.  The wings themselves measure in the same relevant points, 69 mm and 59 mm, with a height of 15 mm. The eagle has a wingspan of 37 mm and the height with the wreath 26mm. The backing is mounted on a metal plate. The reverse and a horizontal pin similar to that employed on medal ribbon bars is found. This is finished with a cloth backing of velvet.

The date of institution of these wings is given as November 1931 when for a brief period up to September 1933, the SA and SS, which was still under the same command at that period, had its own joint flying sections.  Both the SA and SS pilots were awarded these wings, which were worn over the right breast pocket.  The SS Fliegerstürme was formed in November 1931 at München. Eduard Ritter von Schleich was commander of SS Fliegerstaffel Sud. It remained active until it was absorbed by the Deutscher Luftsport-Verband, (DLV), in September 1933.  Schleich left the SS and returned to the Luftwaffe achieving the rank of General der Flieger. 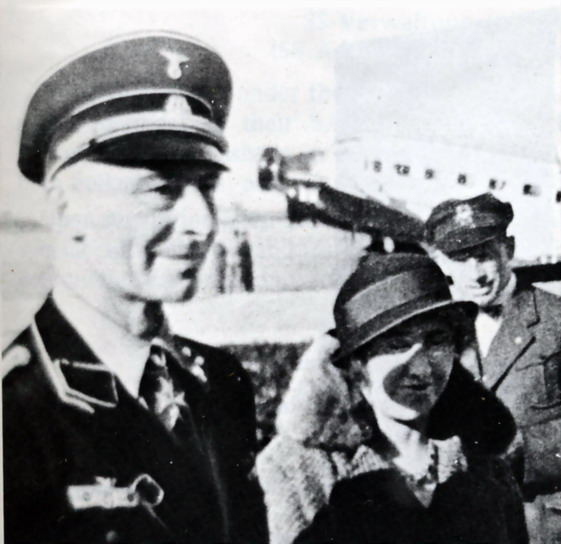 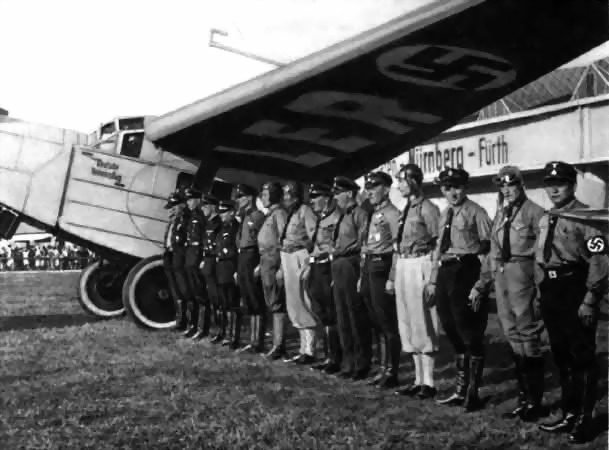 SA and SS Pilots with Plane.
Posted by Christopher Ailsby at 04:28