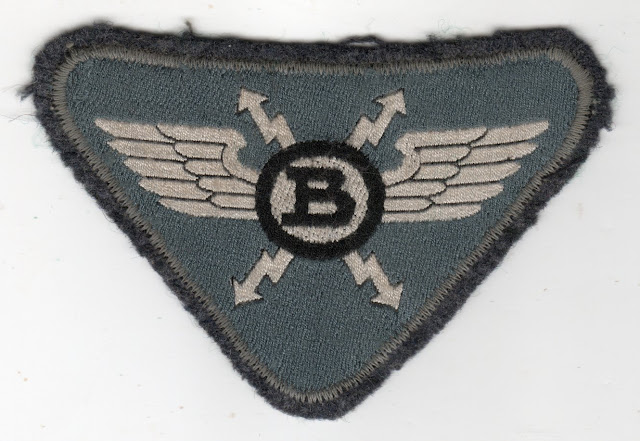 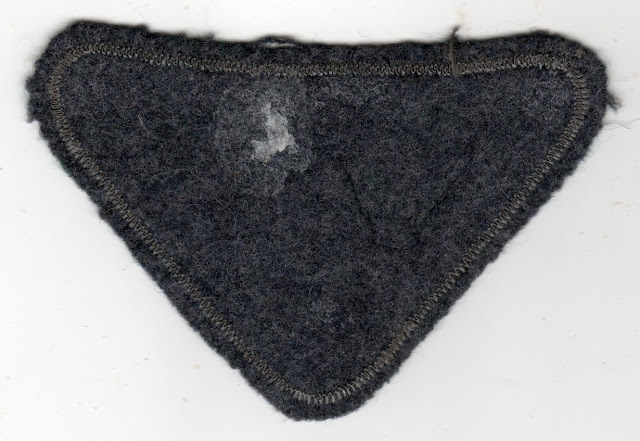 The badge comprises of a light blue cloth inverted triangle with rounded corners, machine woven on blue-grey wool backing. The insignia measures approximately 53mm high and 85 mm wide, which has a darker blue edge line. At the centre is a woven pair of white wings on a blue-grey field, with a black Latin “B” encircled in a black ring. From the circle are four lightning flashes, one projecting at each diagonal. The wings, central circle and flashes are in white, while the outlines of the wings, together with its fletching, and flashes are black. The capital 'B' is for Bordfunker and the lightning flashes symbolise the wireless.
The award was introduced in 1941, however the illustration which accompanied the introduction of this badge shows a Gothic B, but this may have been only the artist’s impression.


It was awarded to students following demonstrated proficiency in practical tests and written examination involving electronics and physics. Although radio training was conducted in the classroom, flying experience was obligatory before the badge was awarded. The student was required to have earned the International Glider proficiency badge in at least the B Level – two gulls. The badge was worn on the lower left arm of the service tunic and HJ uniform.


The student had a Proficiency Book, which contained his photograph and personal details. This book had the test undertaken and duly stamped. A certificate was also issued for the award. 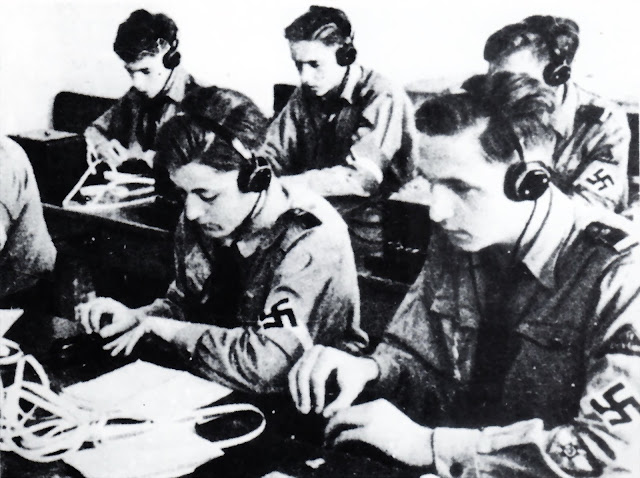 The badge can be seen on the left arm of the HJ Student in the fore ground. 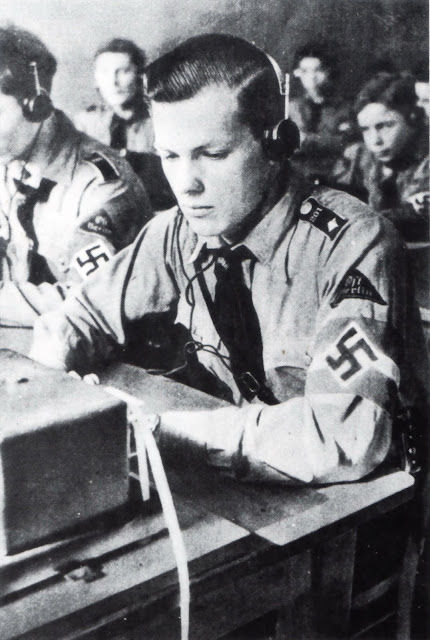 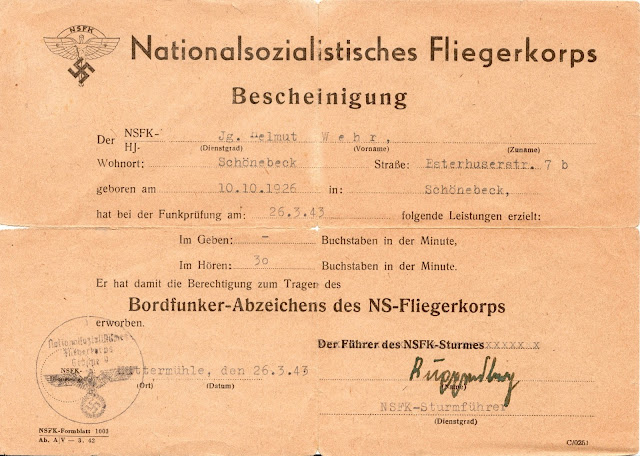 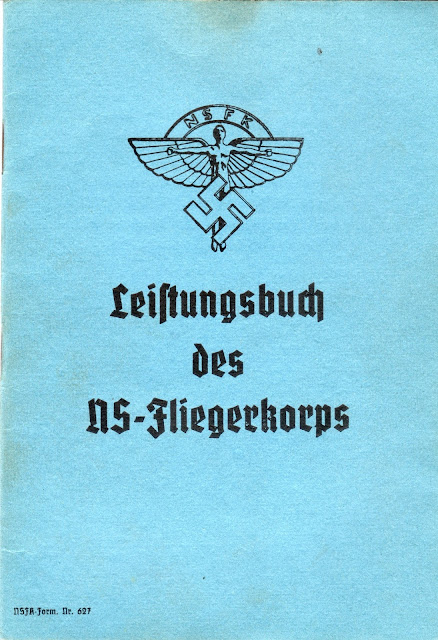 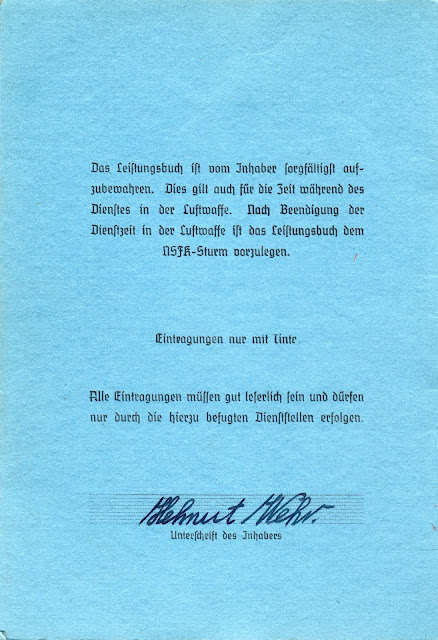 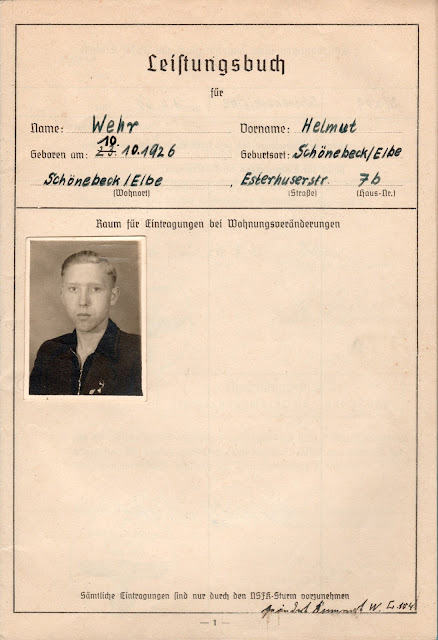 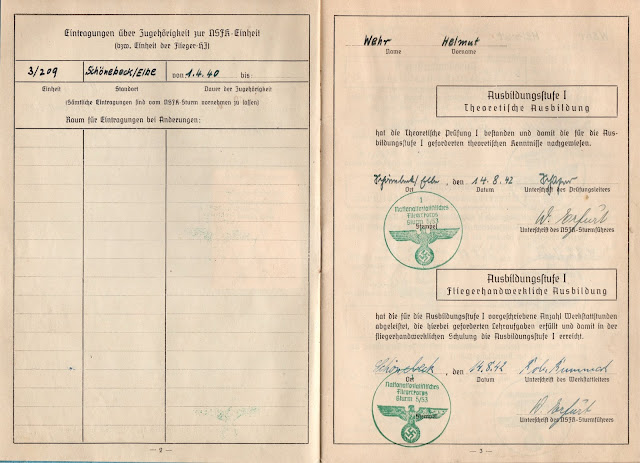 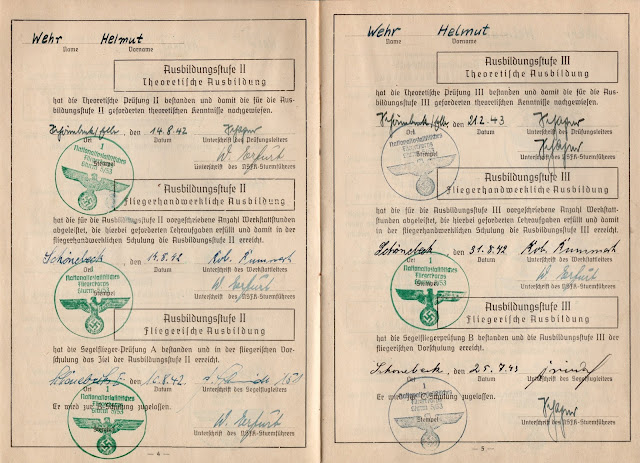 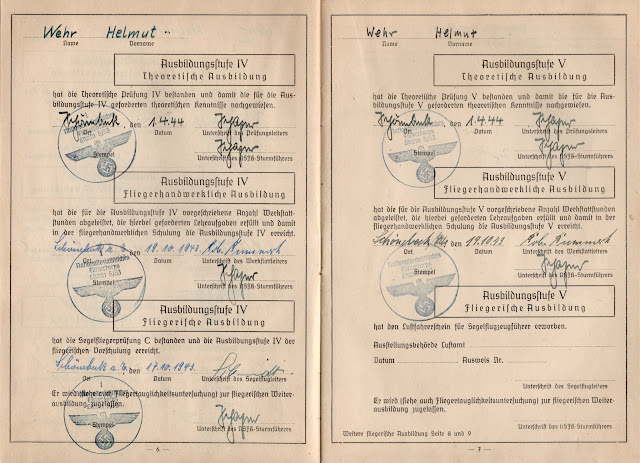 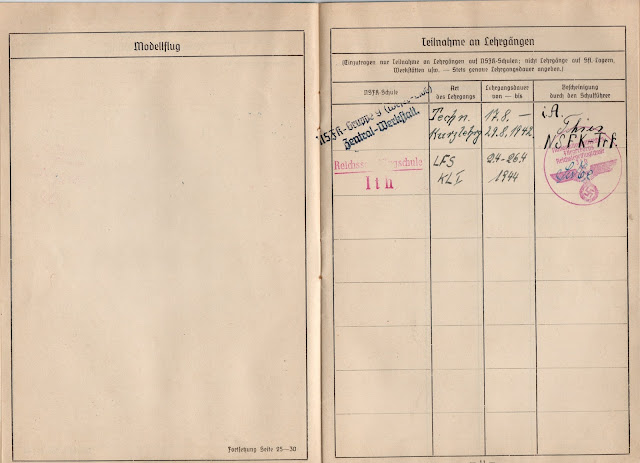 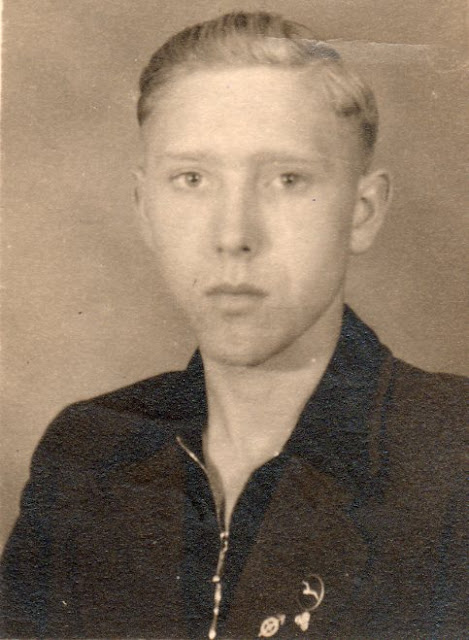 The International Glider proficiency badge "A" can be seen on his lapel together with his HJ Proficiency miniature badge.

These three awards are basically the same and can be found in three varieties.  A cloth badge measuring approximately 50 mm, produced in either silver-grey thread or silver bullion wire on a blue-grey Melton backing.  The badges consist of an embroidered circle that measures approximately 40 mm with one, two or three gulls to represent the grade of the award.  The third variety is a smaller metal badge with a raised outer edge line.  The relevant gull or gulls have a similar raised line and the resultant fields are in filled with blue and white opaque enamel.

This badge was referred to as the Leistungsprüfung C, as well as the Leistungsabzeichen.  This is assumed to have been awarded for long duration flights with a much higher standard aeronautical skills being required with flights in excess of five hours.  It has been stated that two types of badge were employed for the higher awards and these are the silver badge, which had three gulls enclosed in a silver wreath of oak leaves and the golden badge, which had three gulls in a gilt wreath.  It has also been reported that this grade has been encountered in an A Certificate, which has one gull surrounded by an oak leaf wreath and a B Certificate with two gulls surrounded by an oak leaf wreath.  These were all supposedly for long duration flights.  In January 1942 the silver badge was replaced by the NSFK Large Glider Pilots Badge.
These badges were instituted by the International Aeronautical Federation, F‚d‚ration A‚ronautique Internationale before the second world war and, it must be stressed, are still in use today.  They were for varying degrees of proficiency in gliding.  As the Versailles Treaty forbade a German air force, this left gliding as the only alternative of learning the art of civilian flying for commercial or private purposes.  Because of the cost of motor driven aircraft, Germans turned to the sport of gliding and soaring which proved to be an excellent cover for training future pilots of the clandestine Luftwaffe.  Fledgling pilots had to be tested and were judged under the rules of the International Aeronautical Federation.  Qualified pilots were authorised to wear the badges on their respective uniforms on the left breast pocket.  Germany and Italy are believed to be the only countries to allow such badges to be worn on their service uniforms. The metal badges were to be worn on the left lapel of civilian clothing. 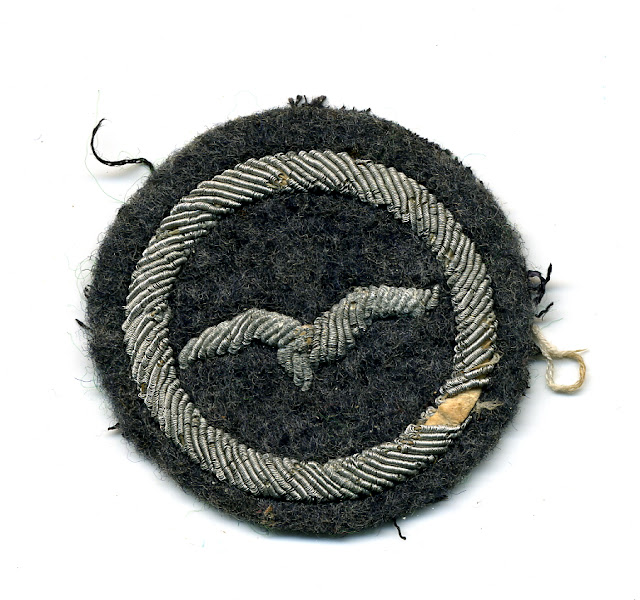 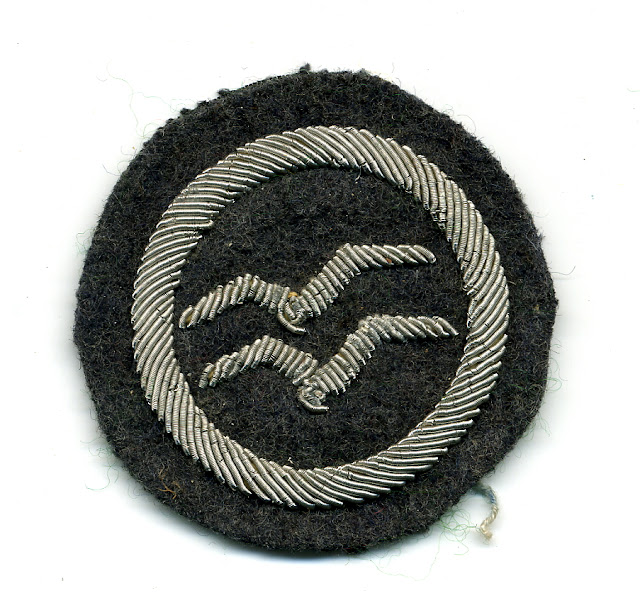 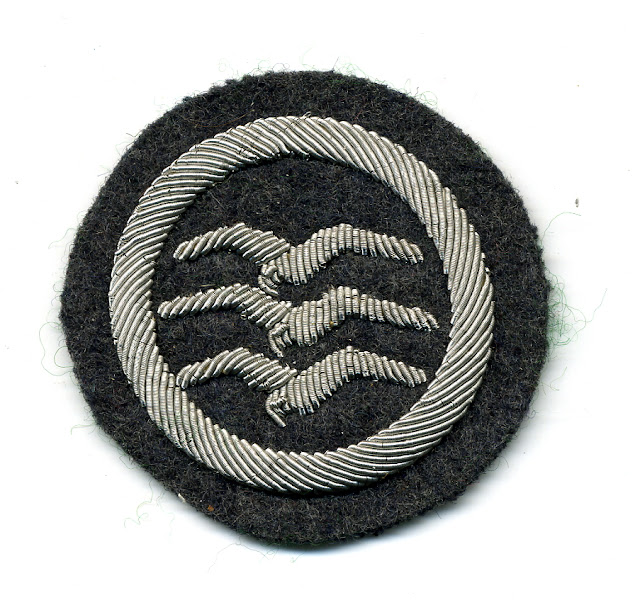 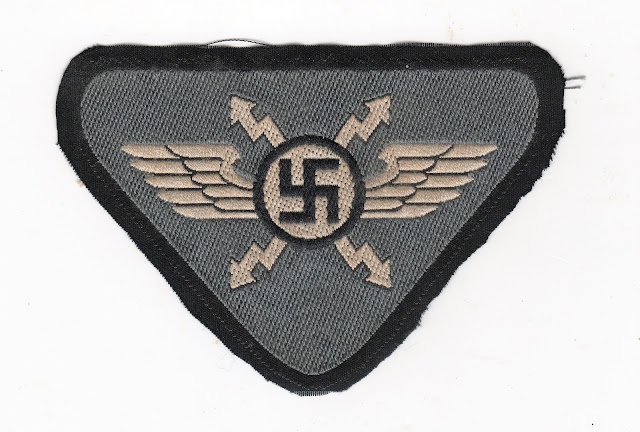 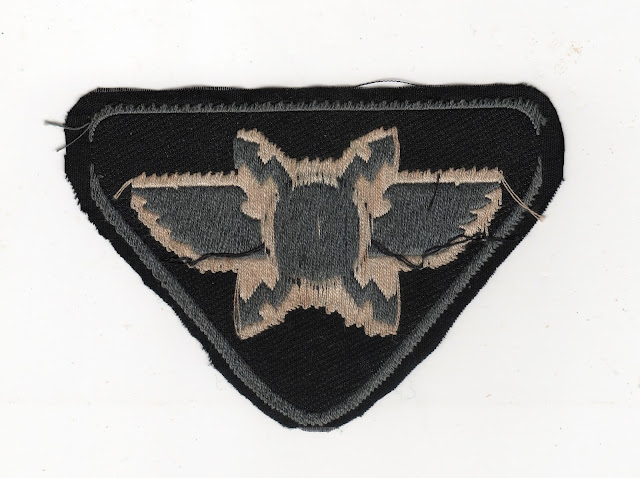 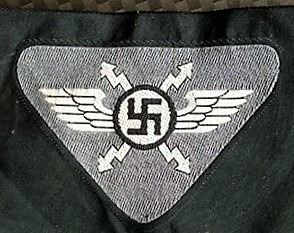 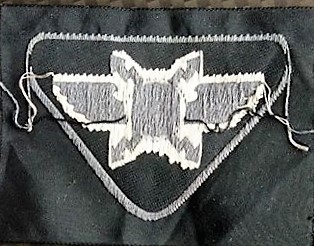 Posted by Christopher Ailsby at 04:55