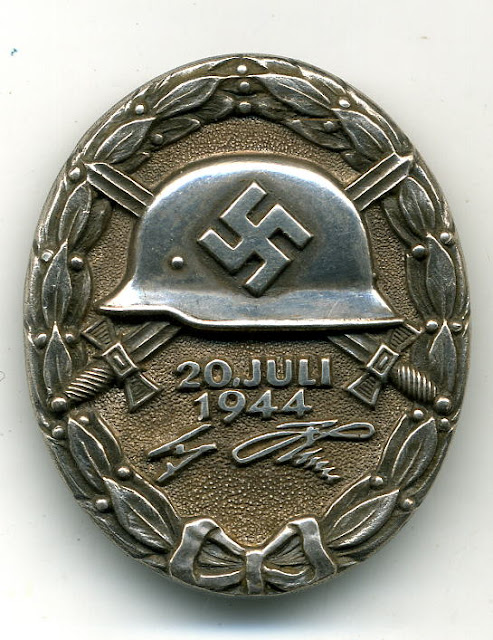 On 20th July 1944, an attempt was made to assassinate Hitler by Colonel Count Claus Schenk von Stauffenberge at the Wolf's lair at Rastenburge, Hitler's H.Q. in the east.  This was unsuccessful but led Hitler and the 24 occupants of the room to suffer varying degrees of wounds.  The most serious being the loss of life of Colonel Brant and Herr Berger, who died immediately, and Generalleutnant Schmundt and General Korten dying subsequently from wounds they received.  The remaining twenty suffered superficial wounds and shock, save for General Buhle and Generalmajor Scherff, who were more seriously injured.
Hitler, to commemorate this attempt on his life and his escape, introduced a special wound badge which he awarded to the 24 occupants, or dependents in the case of the dead.  He declined to award himself one of these medals.  The first awards of this medal were made on 20th August 1944.

THE RECIPIENTS OF THE MEDAL were;-

The quality of these badges is very high and each example is hand finished.  This is illustrated by very fine file marks round the edges of the badge.  The badge was produced by the firm of C.E. Junker of and it is estimated that the firm produced 100 badges.  It took the form of the ordinary wound badge with a very finely formed wreath with a bow at the base and three laurel berries or dots at the apex.  The helmet is nearer the apex and the sword hilts are two bundles of laurel leaves up the wreath from the base, and the upper edge of the hilt of each sword touches the front and back of the helmet respectively.  Beneath the helmet is the date and Hitler's signature.  The date and signature are raised and polished.  The field is hand pebbled and matt finished.  The reverse is flat and bears minute scratches, which epitomise hand finishing.

The hinge is of the "on it's edge" type with a hook at the bottom.  The pin is hand drawn and slightly curled up at the bottom where it fastens into the hook.  On the reverse beneath the pin are the maker's mark L/12 and the silver content .800.  At this point it is interesting to note that each recipient received two badges, the award one as described and a Dress Copy which had L/12 .800 and a small 2 to denote that this was the wear copy or second version.  No other difference exists between the two types save for this small number.

The black version had the wreath, helmet and swords artificially blackened.  The Swastika was less darkened while the date and signature were highly polished and the field was matt silver.  The reverse to include the pin, hook and hinge was also artificially blackened.  The silver version is silver all over, with the signature and date highly polished as before, while the field is again matt silver.  The gold version has a gold or gilt wreath helmet and swords, with again the Swastika slightly lightened, the date and signature are highly polished silver, while the reverse and pin etc., are matt gold.

Criteria for The Award were;-

3] 1 wound resulting in the loss of hand, foot, eye or deafness - Silver award.

The only illness or disease the badge could be awarded for was that of cases of frostbite.

It is assumed that when the recipient was wounded again he received the higher grade of the badge in this form.

The badge was awarded with a Citation that was produced on Vellum paper with a large gilt eagle at its top.  The name and grade of the badge was individually entered on to the Citation.  At the base was Hitler's signature in ink and official seal.  The badge came in a black box with black velvet base and silk lid lining. 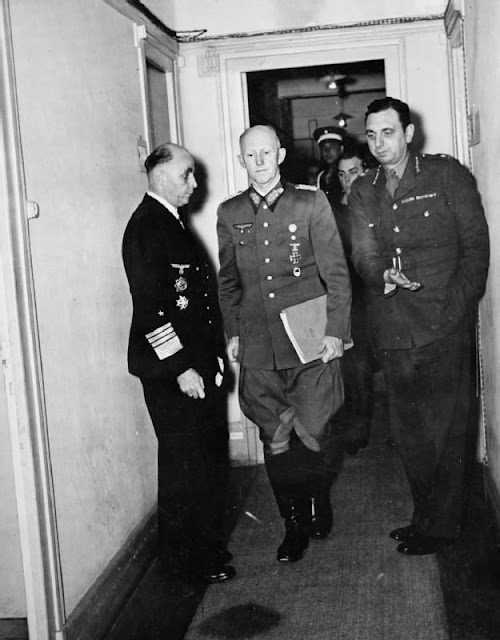 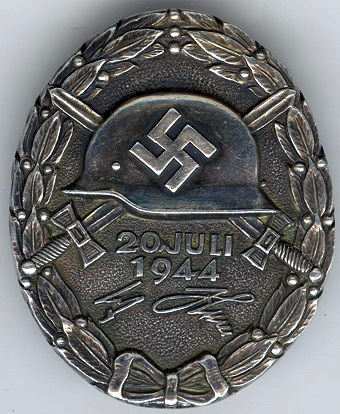 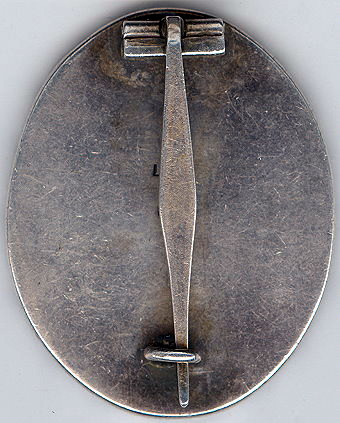 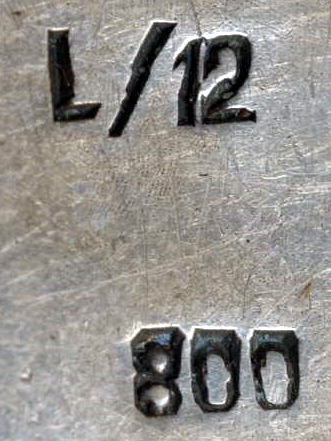