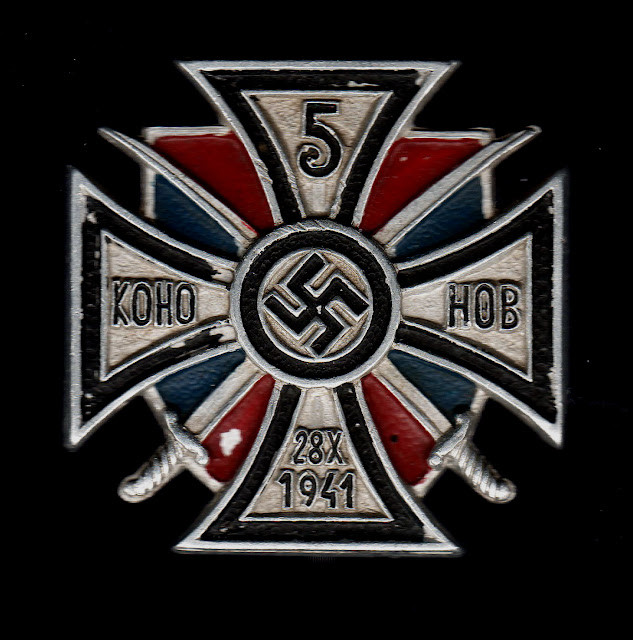 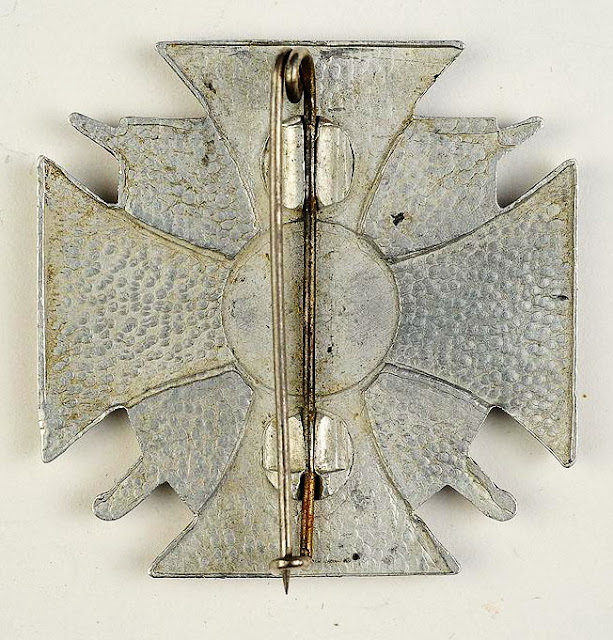 This decoration is in the form of a 45 mm aluminium cross that is superimposed over a shield.  The outer edge of the cross and shield has a raised edge line.  At the centre of the cross is a circular boss with similar raised edge line.  Round the arms of the cross and within the boss, are thinner lines producing a tramline effect.  The field of the tramlines are infilled with black paint.  The resultant fields of the arms of the cross and the boss are stippled and left plain.  On to the field of the upper arm of the cross is superimposed the numeral '5' with raised outer line.  The field is filled with black paint.  The lower field has, in two lines, in similar construction, '28 X  1941.'  The left-hand field, in cyrillic characters, has, 'K O H O', and on the right, 'H O B', in similar construction.  All are infilled with black paint.  The significance of the numerals is the regimental number and the date of the foundation of the regiment.  The cyrillic characters translate to the name of its commander, Kononov.  The field of the central boss has a swastika, again with raised edge and black paint infill.  Through this and superimposed across the shield are crossed Shashkas or Cossack swords, with their hilts breaking the outer edge of the shield in the lower quadrants of the cross, and their tips the outer edge of the shield in the upper quadrants of the cross.  The panels produced adjacent to the vertical arms of the cross are infilled with red paint and those next to the horizontal ones are infilled with blue paint, representing the red and blue shield of the Don Cossacks.


The reverse is flat with a single raised line that represents the outline of the obverse.  The centre has a flat smooth circle that corresponds to the obverse's central boss.  The upper and lower arms have a protrusion with a central slit that has a steel 'safety pin' inserted into it.  This is then pressed over by the protrusions.  The whole of the reverse is finely pebbled.  It was worn on the left pocket of the uniform.


The 5th Don Cossack Regiment and the 2nd Siberian Cossacks Regiment both had their own regimental crosses.  These are not decoration per se but rather items of dress.  The wearing on the breast pocket of regimental crosses, enamelled badges or other emblems to distinguish a unit or training establishment is common to many continental countries, particularly Poland.  However, these crosses were unique in the German armed forces and took on the resemblance of a campaign award or tradition badge for, in October 1941 an entire Cossack regiment with all its officers, including its commander Colonel Kononov, deserted from the Red Army and offered their services to the Germans.


The 5th Don Cossack Cavalry Regiment was the first completely Russian unit, with its own officers, to fight for the Germans.  Kononov, by the end of the war, had been promoted to Major General and given command of all the Cossack formations in the German Army.  The German officer most closely associated with the Cossacks was Oberstleutnant Helmuth von Pannwitz.  He had struck up a close friendship with Nikolai Kulakov, the clan chief or Ataman of the Terik Cossacks, who promised the active co-operation of his people in the struggle against Stalinist Communism.  Pannwitz broached the matter to the Chief of the General Staff, General Zeitzler, suggesting that it could be possible to raise a regiment of Terik Cossacks.  Zeitzler approved and promised that Pannwitz would command such a regiment if it were ever raised.  However, when Pannwitz asked the poignant question, where were the troops he was to command the General ruefully answered, “You'll have to find them for yourself”.  The resourceful Pannwitz proceeded to tour the front in his Fieserler Storck 'plane, resorting to methods which cannot be described as entirely orthodox.  He managed to 'find' about 1000 men and six tanks.  The Pannwitz cavalry unit proved its worth in combat and convinced of their value as a fighting force, he urged the creation of a Cossack Cavalry Division.  The horrific losses in the east made the Army welcome any reinforcements of its overstretched manpower.  The raising of such a division was approved and in April and May 1943 the first Cossack Cavalry Division was formed at Kherson in the Ukraine, comprising of Don, Terik and Kuban Cossacks.  The Army also sent a regiment of Kalmuks to Kherson, who had traditionally formed part of the Don Cossack Army and subsequently over 12000 men were assembled.  They were then moved to Malwa, north of Warsaw.  It must be assumed that by this time the Germans had discovered the distinction between Cossacks and Kalmuks, since the latter did not accompany the others to Malwa.


More than half of the new division consisted of men recruited directly from the Cossack areas.  The rest were volunteers from the POW camps or from among the Ostarbeiters in Germany.  The troops at Malwa included the German commanded Jungschulz, Lehmann and Wolff Regiments, as well as Major Kononov's Kos. Abt. 600.  The volunteers were then grouped into two brigades of three regiments each.


Of the six regimental commanders Kononov was the only non German.  From this brief background of the history of the Cossacks it is possible to conclude that due to the rarity of the badge and the lack of photograph evidence of wear of the cross, it was possible that the cross was to recognise original members of the 5th Don Cossack Cavalry Regiment who deserted in 1941.  But it must be asserted that this theory is purely supposition.
Fake.
These were produced in the late 1970's and were sold by the UK Dealer T B Oliver. They were sold as copies and the price was in the region of 10 Shillings. The main point of variance is the tail of the 9 in the lower arm of the cross. 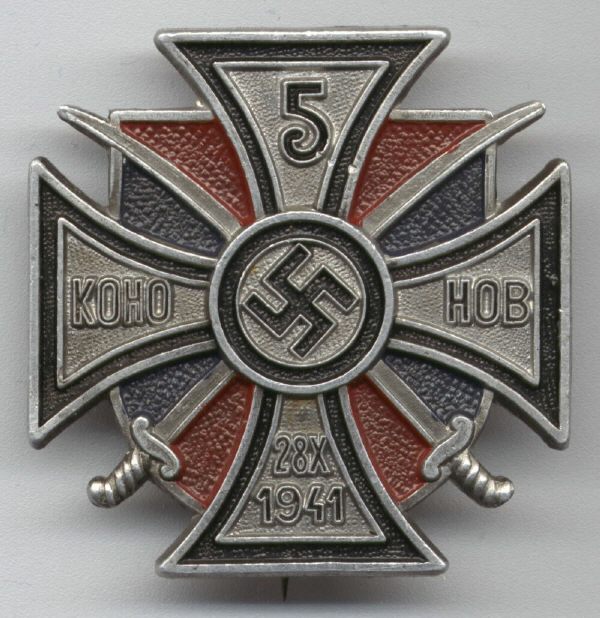 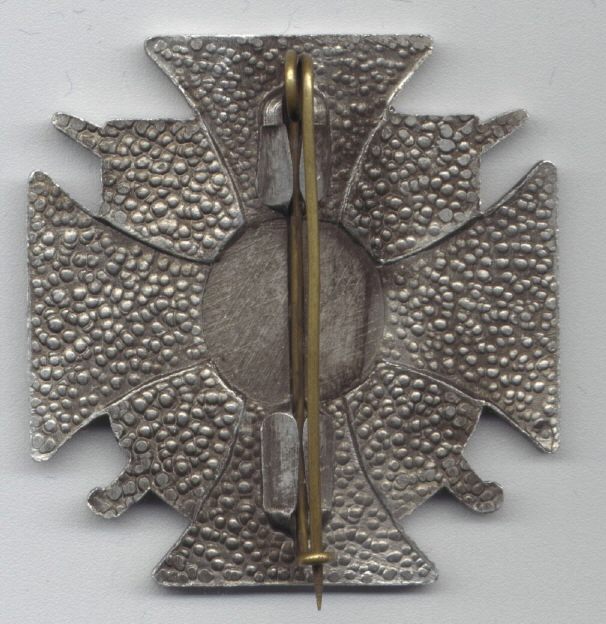 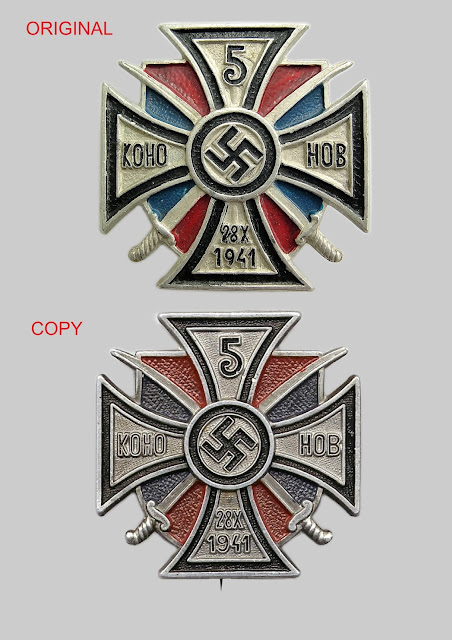 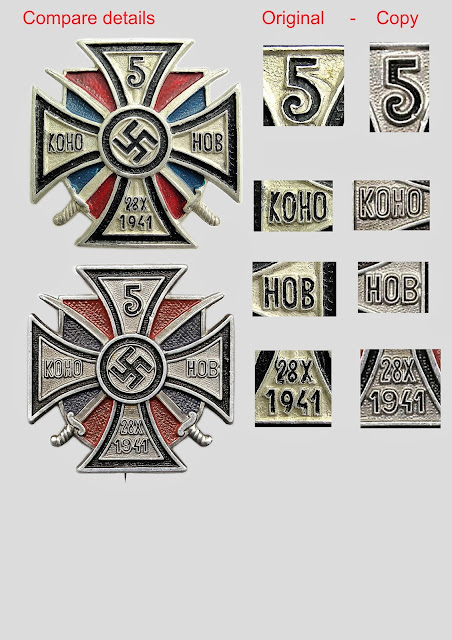 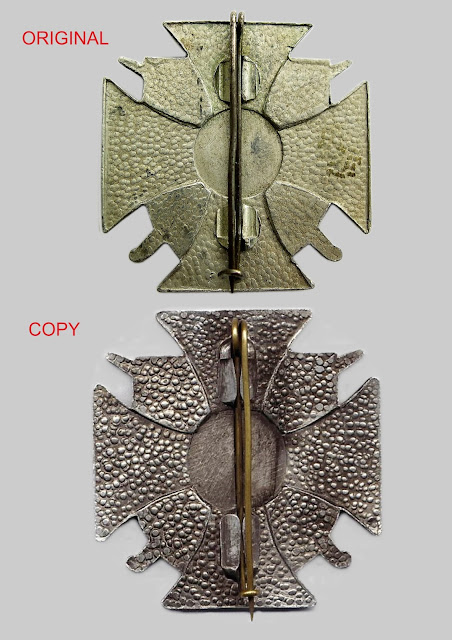 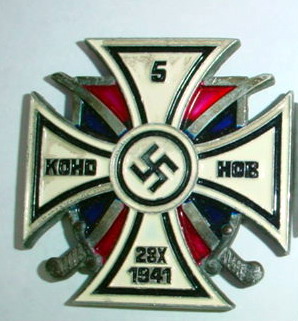 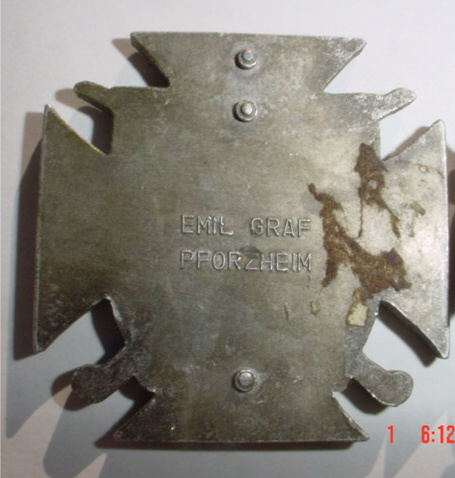 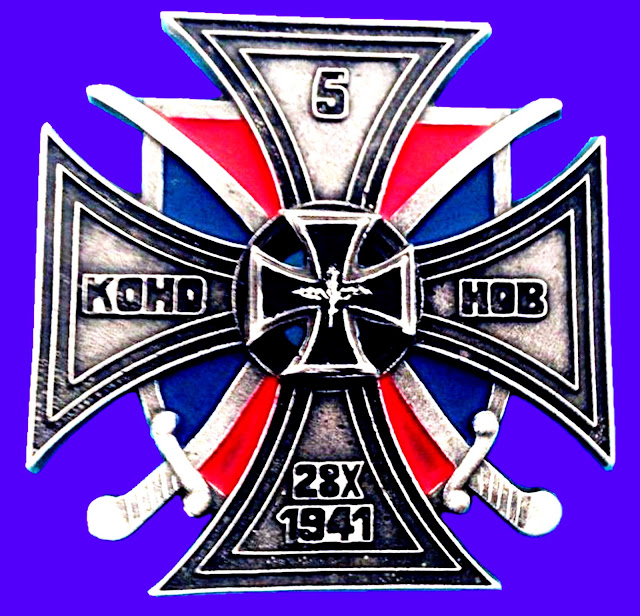 Posted by Christopher Ailsby at 08:10