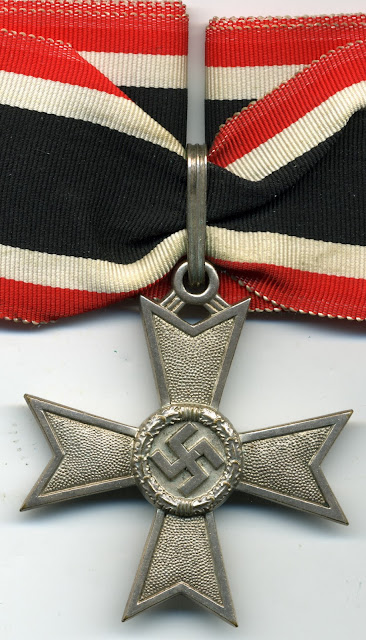 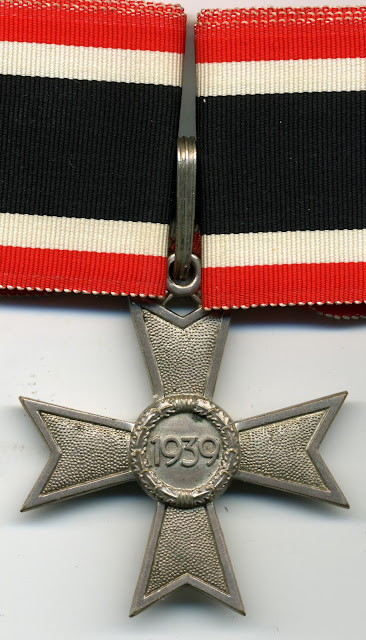 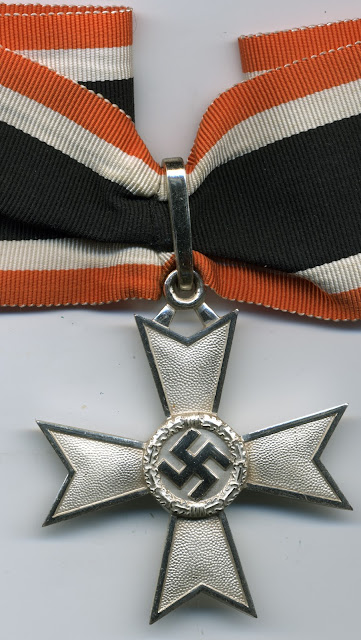 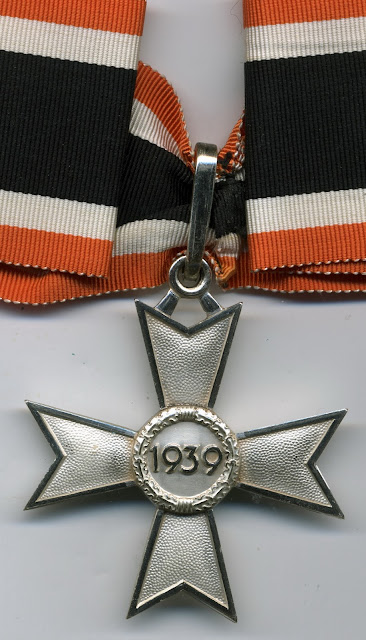 This award takes the basic design of the War Merit Cross Second Class but is larger, measuring 54 mm across the arms and the oak leaf wreath measures 18 mm.  The widths of the arms of the cross are 3 mm.   It was usually produced in genuine silver, with the silver grade ranging from .800 through to .950 but in some examples the cross is but silver-plated and these examples just have the maker's number on the lower arm.  The upper arm has an inverted V attached to it, with three lines on each arm and with an eyelet at its apex.  It is very important at this point to expel a theory that has been in existence for some time that this version came with only a plain hanger.  It is, in fact, found with both ribbed and plain varieties, not only that, they are not all as long as one another.  Also, in the case of the plain type the inverted 'V' is also plain to match the hanger.  Through this eyelet is a ribbed hanger which supports the cross on the neck ribbon.  As with all Knights Crosses it was worn around the neck.  The ribbon comprises of a 46 mm band formed from stripes of 4 mm red, 4 mm white, 22 mm broad black, 4 mm white and 4 mm red.  For the examples of the cross that were awarded, the ends of the ribbon were turned over into a triangle with a length of minute ribbon at each end to act as ties to secure the ribbon around the neck of the recipient.   This is a new and very interesting point.  If one had a short neck, one required a shorter hanger for comfort.  If one had a number of neck decorations, General Otto Stapf for example had both the Knights Cross of the Iron Cross and the Knights Cross of the War Merit Cross with Swords, the hangers had to be adjusted for the comfort of the wearer, for there was no undress version for wear for either of these orders.  This was also the case of the earlier Pour le Mérite, which a number of staff officers had won in the first world war and had to wear with their second world war counterparts.


Criteria for the Award were;


It was a prerequisite for a recipient to already hold the War Merit Cross First and Second Class.  Recommendation had to be forwarded through the OKW or state minister to the Reichschancellery where it was personally approved by Hitler.


On 19 August 1940 this cross was introduced to reward the high achievements of the civilian population, civil service and political formations, to encompass military personnel and was for outstanding service in the furtherance of the war effort but not directly connected to combat.   Great ceremony was employed with the award of the Knights Cross decorations and the recipient was usually accompanied at the ceremony by a Knights Cross winner.  The Knights Cross of the War Merit Cross ranked above the German Cross in Silver but below the Knights Cross of the Iron Cross.  Only 48 awards were rendered of this decoration, which made it very prestigious in the eyes of the Nazi hierarchy.  Hitler in fact, circulated a letter from his headquarters on 27 August 1943, outlining the criteria for award and the philosophy surrounding it and directed that 'prominent party comrades' were not to be honoured with this decoration.  A definite jibe at Reichsmarschall Hermann Göring who had coveted the award of the Knights Cross of the War Merit Cross with Swords.  David Littlejohn premises that this statement, 'prominent party comrades not to be honoured with this decoration', was made because Hitler had The German Order in mind for the 'top brass' of the party.  We know from Albert Speer that Hitler wanted to reward Himmler with something but could not make up his mind just what.  Speer threw out hints that he himself would not be unappreciative of a decoration!  He thinks Hitler intended to see just what each of the top people had contributed to victory, once Hitler had won the war and then starts giving out the German Order in various grades.  The dead had already made their contribution, which is why, Littlejohn suggests, it was mainly dead party comrades who received the rare Order, thus the recommendations for the awards proposed for Gauleiter Koch and Stadtsminister Backe were refused or, more politely, withdrawn.  In one case the cross was awarded in both forms to Reichsverkehrsminister Julius Dortmüller, who received it on 19 September 1943 and was awarded the cross with swords on 24 July 1944.  Conjoined with the award was often a secondary prize as was the case with Dr. Theo Morell who held the post as Hitler's personal physician.  He received Germany's only electron microscope in conjunction with his award.


It has been believed that 118 awards of the cross without swords were rendered.  However, the actual number is 48, as shown by the list of recipients.  Not only that but not all the recipients have been officially recognised in the form of gazetting.  This non public announcing was to ensure the anonymity of the recipient and the work in which he was involved.  This was also common in the awarding of British decorations, thus other awards may come to light.


It was presented in a blue box, with an inside black velvet base, which has a round recess into which the cross and hanger fit.  The upper part of the box above this recess is indented to accommodate the neck ribbon. 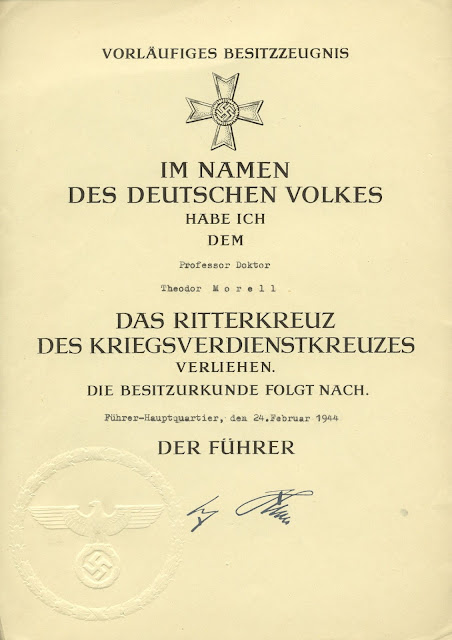 Posted by Christopher Ailsby at 12:50