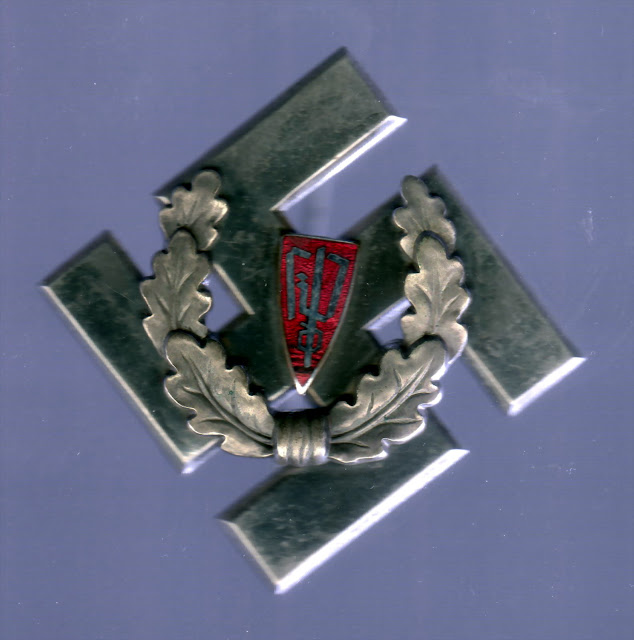 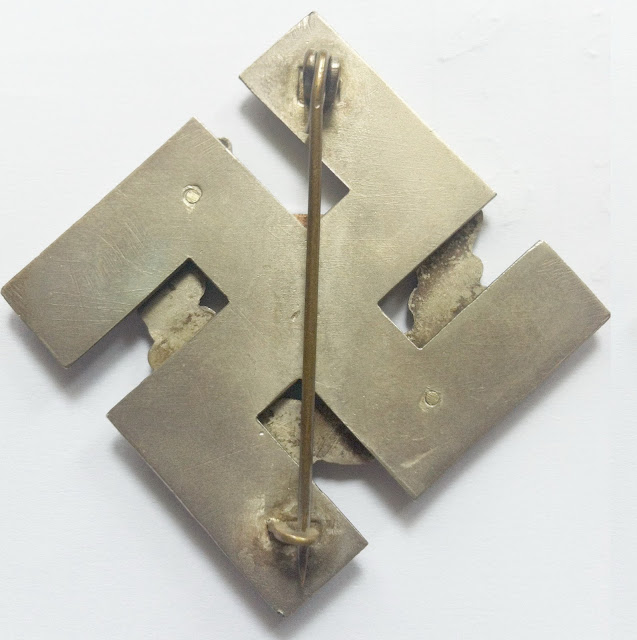 Carpathian German Decoration - Reverse.﻿
This award takes the form of a silver swastika measuring 58 mm by 58 mm, with the widths of the arms being 10 mm.  The obverse is flat with the arms of the swastika having a 1 mm chamfered edge.  At the centre is superimposed an elongated, pointed shield, measuring 17 mm by 9 mm, with a fine, raised edge line.  On to the recessed central field, in raised stylised capital letters is, 'K d P'.  The field is lightly stippled with small round pellets.  The raised line and initials are in silver while the field is infilled with translucent red enamel, allowing the stippling to reflect the light.  Over the arms of the swastika is superimposed a half wreath of oak leaves with a single ribbon wrap at its base.  On either side are three individual oak leaves which reduce in size and overlap one another tip on stalk.  The wreath measures 35 mm across and has a width of 8 mm.

The reverse is flat with a horizontal hinge, needle pin of the shepherd's crook type and 'C' form hook that is soldered directly to the lower arm of the swastika.  There are two small flush rivets securing the wreath to the swastika.

The Volksgruppenführer, Franz Krmasin, of the German racial group, instituted the decoration for distinguished service.  The pro Nazi Volksdeutsche of Slovakia had, before the disintegration of , belonged to the Kappatendeutsche Partei or K.d.P., the Carpathian German Party, which was the Slovak branch of Heinlein's S.d.P. but on 9 October 1938 the K.d.P. became the Deutsche Partei or DP.  The Volksdeutsche of Slovakia were disappointed that Hitler had not annexed and declared it to be a German province.  Despite this disappointment the DP consciously and with the unconcealed aid of various agencies within , set about replicating the NSDAP in its organisation and aims.

The precise criteria for the award are unknown but considering its designation for distinguished service, it is possible that it was for the setting up of the party along the lines outlined.

The badge was worn on the left breast pocket.  The design of the presentation case is unknown. 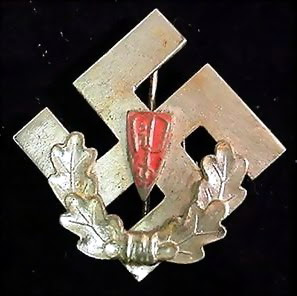 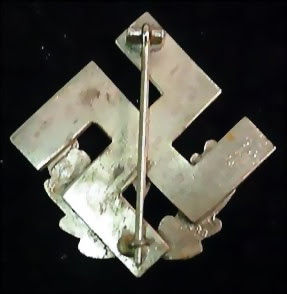 This fake is a very poor attempt. However there only a small number that have been attempted.
Posted by Christopher Ailsby at 08:17