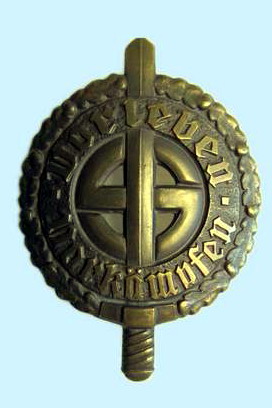 The badge comprised of a wreath of overlapping single oakleaves through which passes a broad bladed double edged sword, the tip of which and the handle rise above and below in equal proportion, while the quillons form part of the wreath. Inside the wreath is a slightly raise band onto which in raised in rustic letters is the motto “Vorleben – Vorkämpfen” which roughly translates to “Set an example in life and in battle”. At the center is a mobile swastika of the Sun Cross form.

The reverse is slightly dishes with the imprint of the mobile swastika. In raised letters is L3 and below STZ. Beneath is stamped the issue number. The badge is produced in bronze metal. Up to 1943 a total of 1593 awards of this badge had been made. The badge was given with an award book. This had the photo of the recipient, together with a franking of the badge. 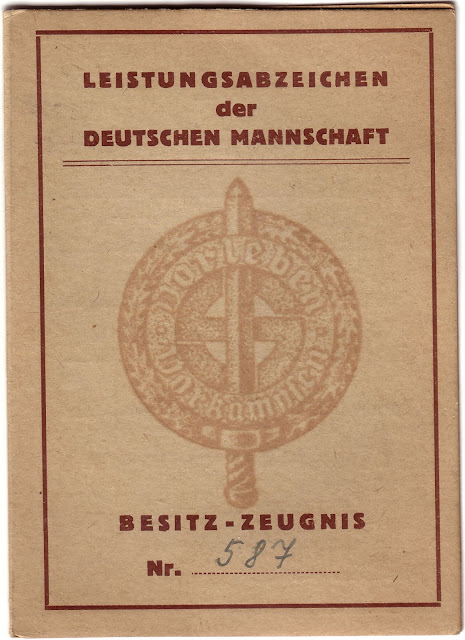 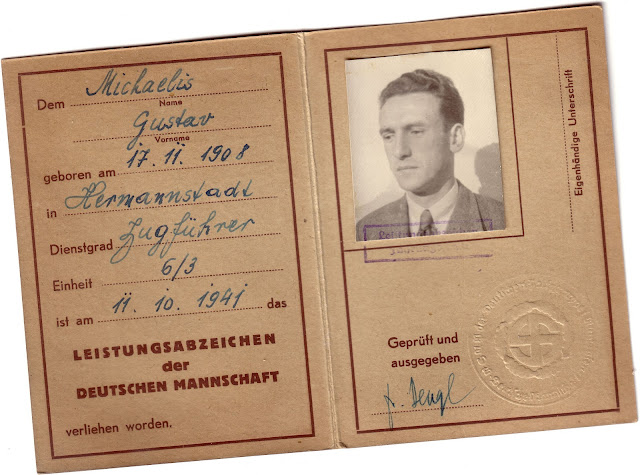 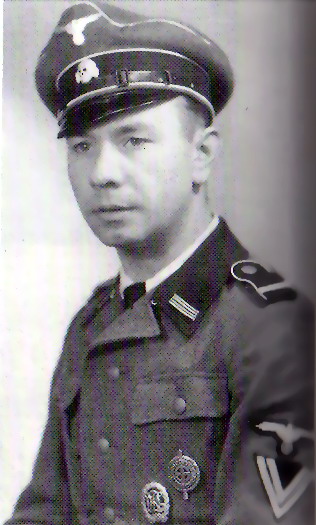 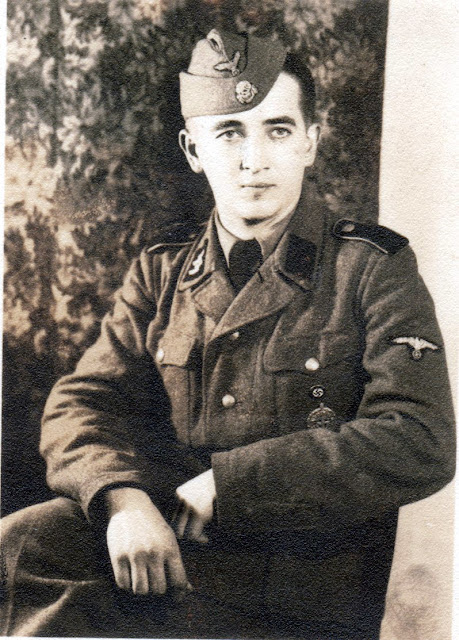 Fritz Fabritius was the Volksgruppenführer, but it seemed his Berlin Masters did not hold him as a sufficiently dedicated Nazi, for he was replaced by Andreas Schmit in 1940. Schmit enjoyed the not inconsiderable advantage of being the son in law of the head of the SS Main Office for Germans Abroad, SS-Brigadeführer Gottlob Berger. On 20th September 1940 the Volksgruppe was granted by the Romanian government the status of a semi independent community within the national state. The party was now redesignated the NSDAP der Deutschen Volksgruppe in Rumänien. The NSDAP of Romania was a carbon copy of the NSDAP of the Reich with only slight changes of name for its sub – formations.

According to the Jahrbuch of the German Volksgruppe in , published in 1943, the Einsatz Staffel and Deutsche Mannsschaft, which were the Romanian German equivalents of the Allgemeine SS and SA, had between them a membership of 31000. They were the active Para-military units of the Party. However all males up to the age of 60 were expected to belong to the home – based Heimat Dienst, if they were not already enrolled in either the E.S. or D.M. In 1943, this static “Home Guard” had strength of 36640 members. Both the E.S. and the D.M. had their own leadership school. E.S. officers were trained at the Heinrich 1 Führerschule, while D.M. leaders went to the Horst Wessel Leaders’ School. Instruction at both was based on the tests leading to an award of the Wehrsportabzeichen or Leistungsabzeichen as it was sometime referred to in German documents. Any German could enter the tests required for an award irrespective of whether or not he was a member of the E.S. or the D.M. 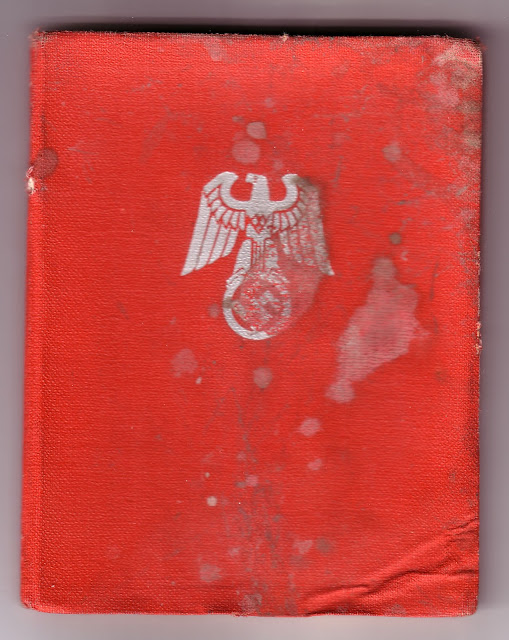 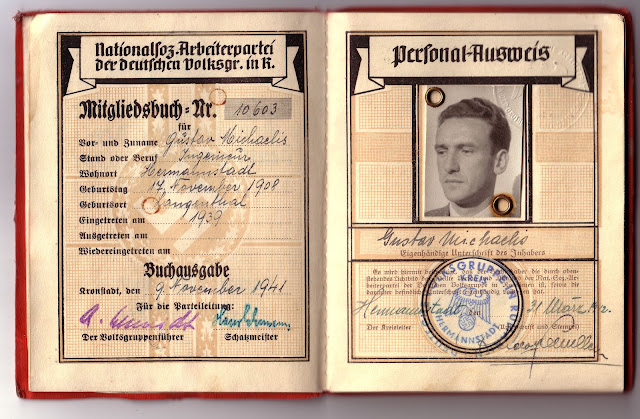 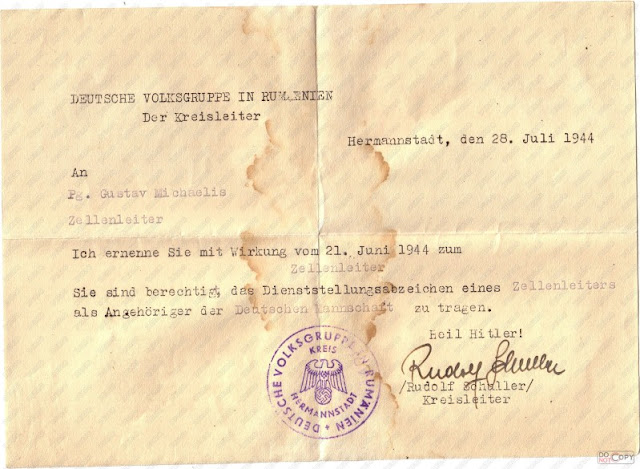 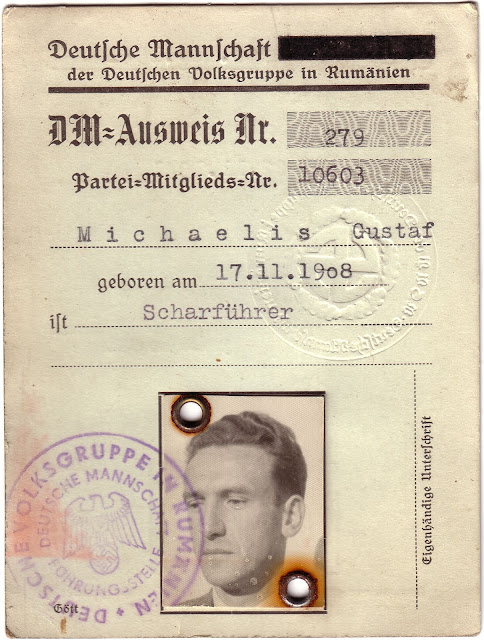 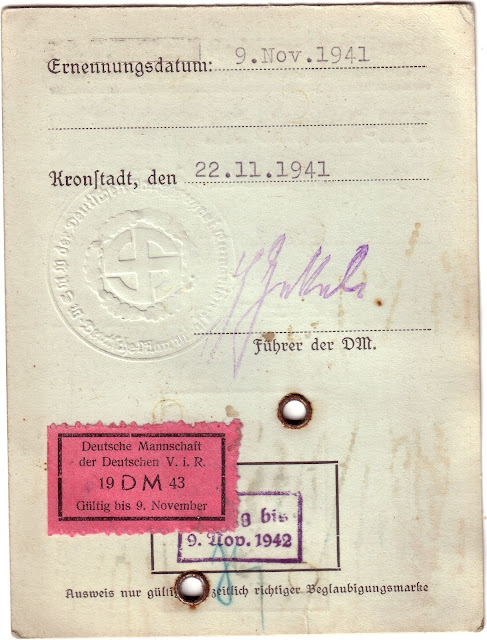 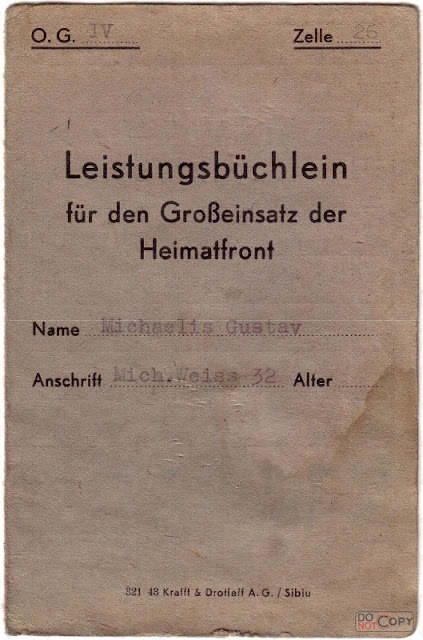 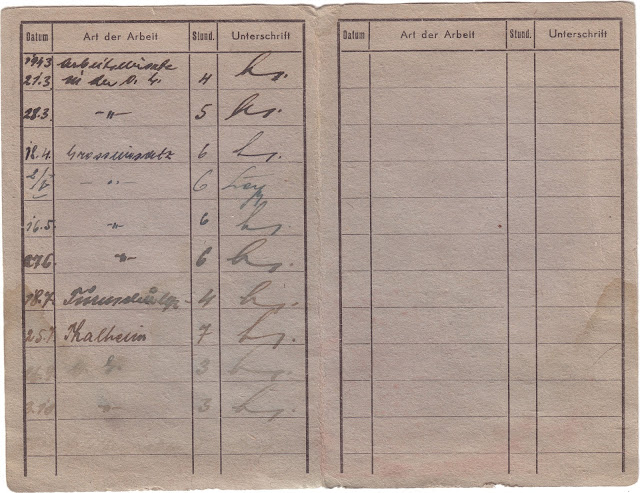 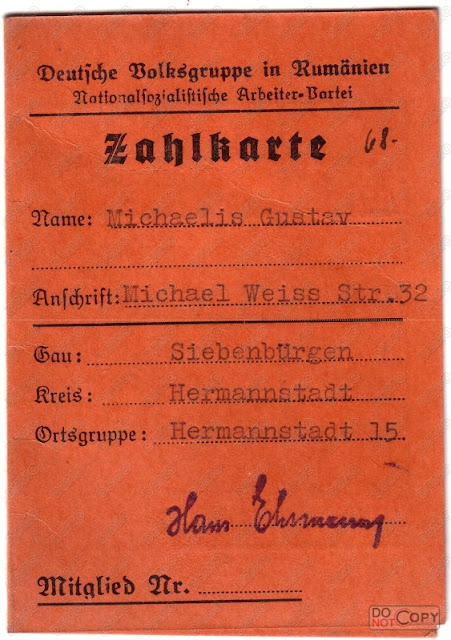 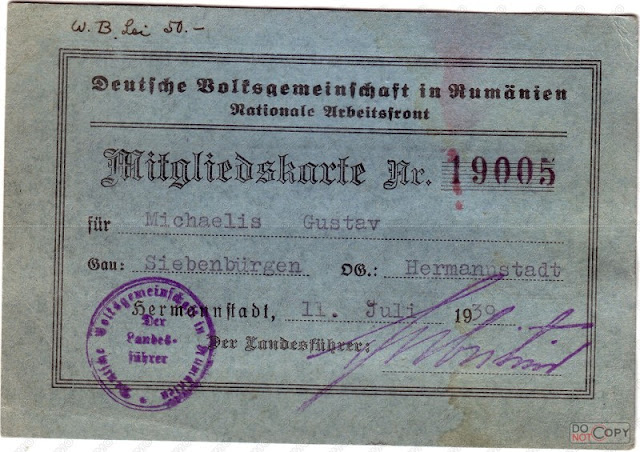 Many joined the Waffen SS, EITHER VOLANTRILY OR UNDER DUERESS. 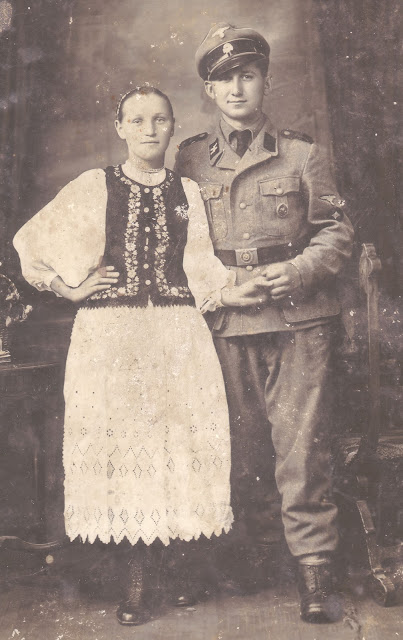 Volunter with his Girlfriend in traditional Dress. 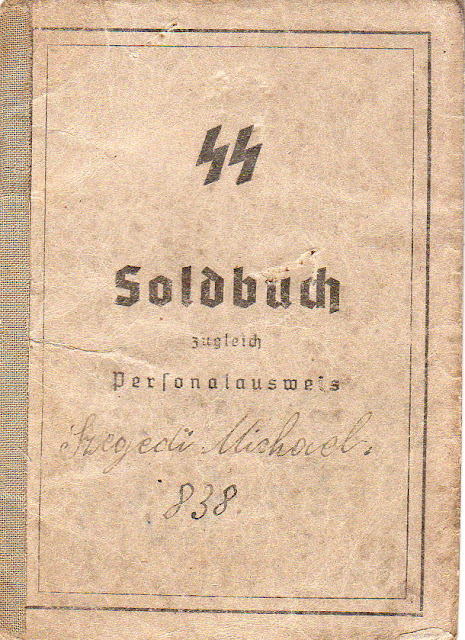 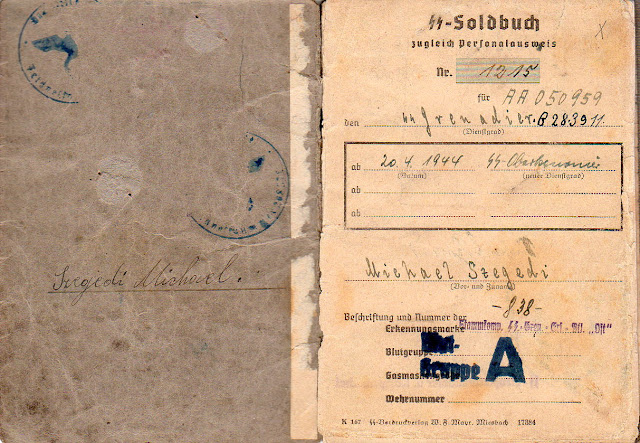 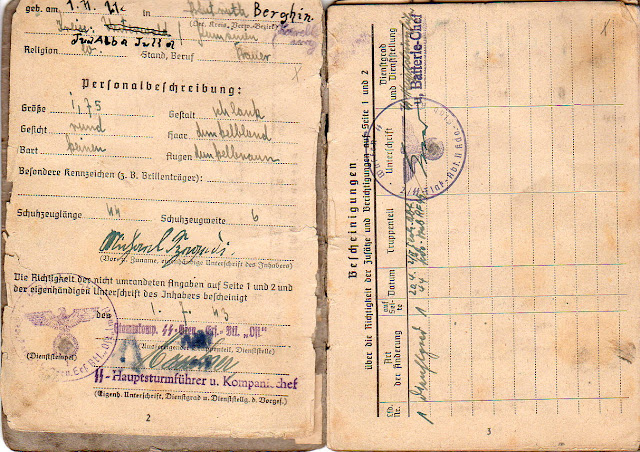 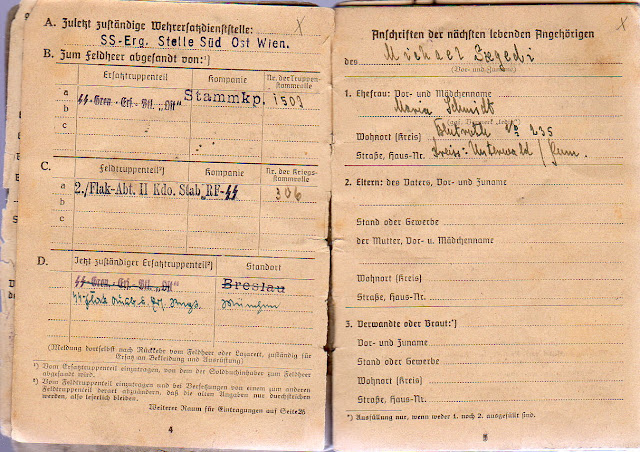 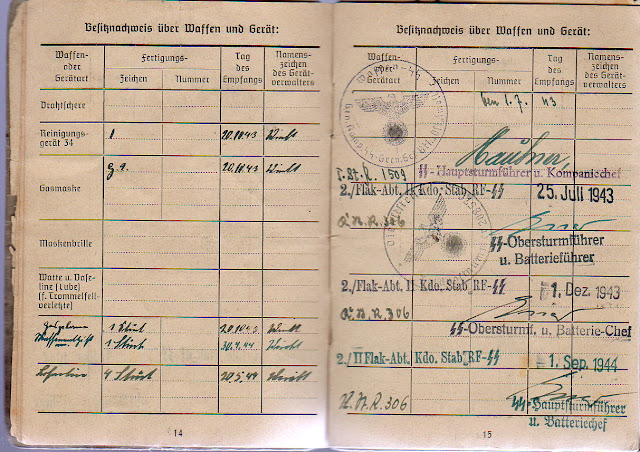 Posted by Christopher Ailsby at 12:45