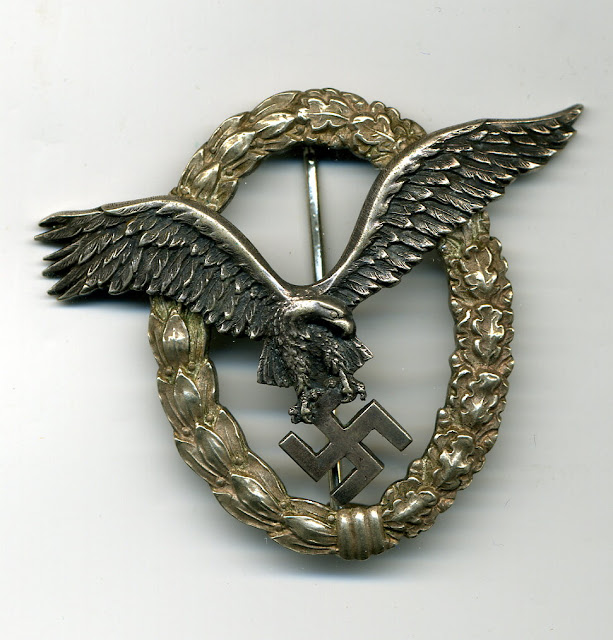 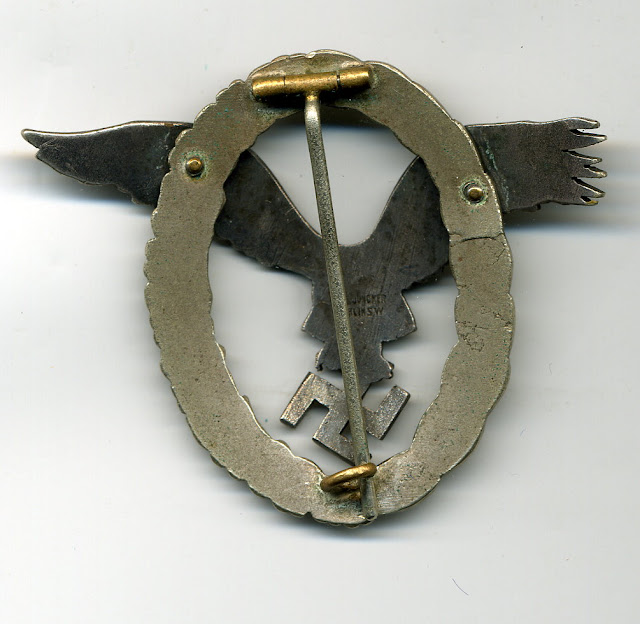 
The original instruction for this badge came on 27th May 1935, although Göring did not bring the badge into being until 12th August 1935.  On 27th November 1935 the regulations publishing the exact specification for the badge were made public and were, an oval, slightly convex, silver-plated wreath, the right half of laurel and the left half of oak leaves.  This is the opposite of the Aircrew Badge.  The raised surfaces of the wreath are highly polished.  At the base of the wreath there is a three-band tie and, on the viewer's right, nine bunches of three oak leaves overlapping one another.  At each joint are two acorns, one on either side.  On the opposite side are nine bunches of three laurel leaves with two berries at the joint, one on either side of the central leaf's point.  The wreath is 53 mm by 42 mm with a width of 8 mm.  It has an eagle in flight mounted upon it, oxidised and old silver-plated, clutching a swastika in its claws.  The wings are finely detailed, as are the head and body.  Normally, the gap between the legs is solid but in the case of the badges produced in aluminium, this area is generally voided.  Occasionally, the portion between the legs is voided on the early nickel silver versions as well.  The wingspan of the eagle can vary between 64 mm and 67 mm, due to the form of manufacture as well as the individual producer.  On the reverse the eagle is riveted to the wreath on each side by two small ball rivets, which change in style with the different methods of manufacture.  There is a vertical hinged pin, which is soldered on.  This badge was found in nickel silver or aluminium and as the war progressed, pot metal or monkey metal.  I consider the most desirable badges of this type to be the thin wreath, nickel silver and aluminium types produced by CE Juncker. 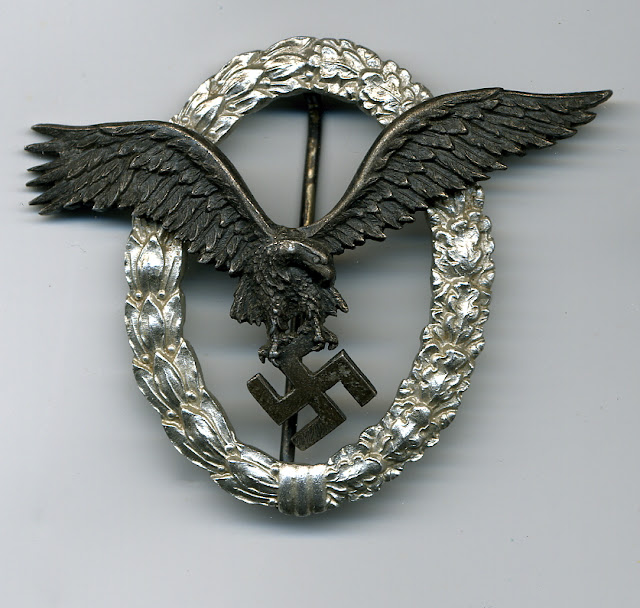 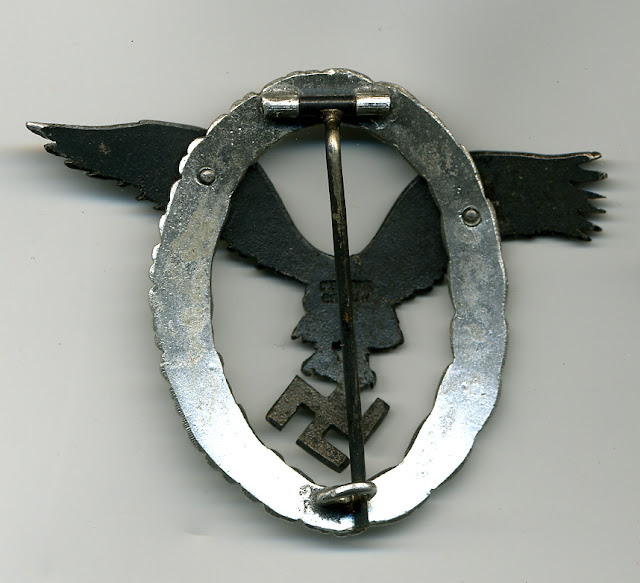 
The badge was awarded upon completion of the flying training and when the pilot received his flying licence and citation.


Dr. Heinrich Doehle gave the institution of the badge as 26th March 1936 and this has been widely considered as the official date of introduction.  This poses the intriguing question, 'What was the design of the Pilots Badge from 12th August 1935 to 26th March 1936?' There are two versions of the cloth badge, which correspond to the officers and NCOs, taking the form of the metal badge but embroidered in relief.  The wreath is worked in silver, the eagle in oxidised silver, and the swastika in dull aluminium thread.  The NCOs version is identical but expedited in cotton thread.  The badge was worn on the left upper pocket of the service uniform or flying jacket.  It was issued in a blue box with the badge designation stencilled in gold block letters on its lid. 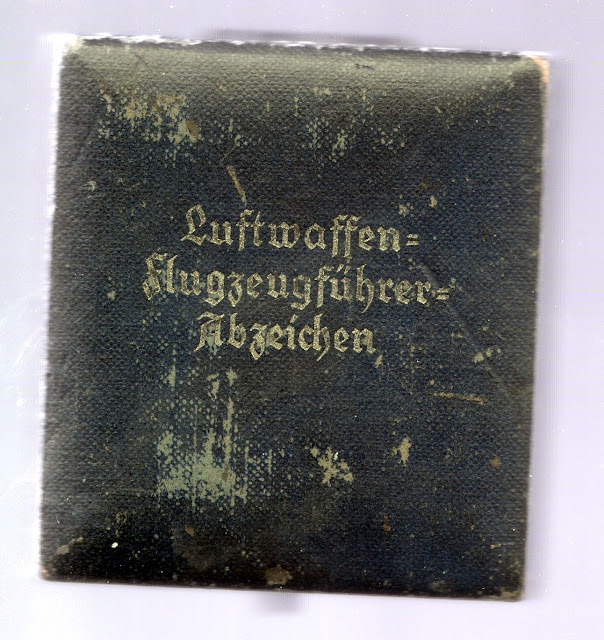 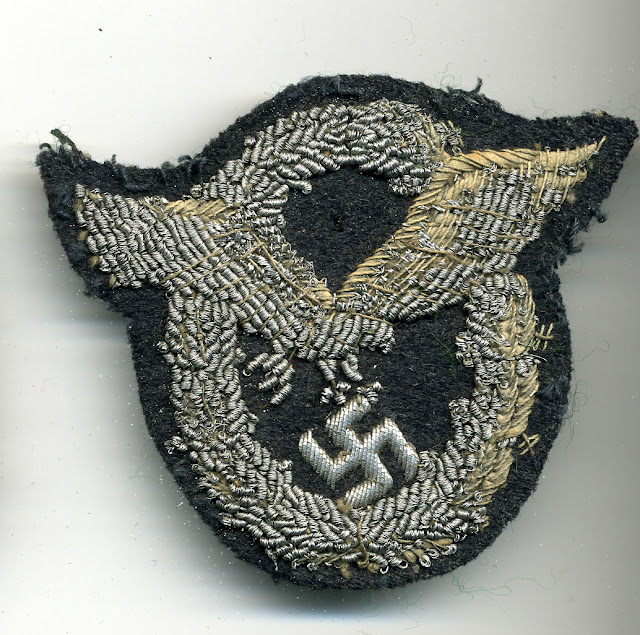 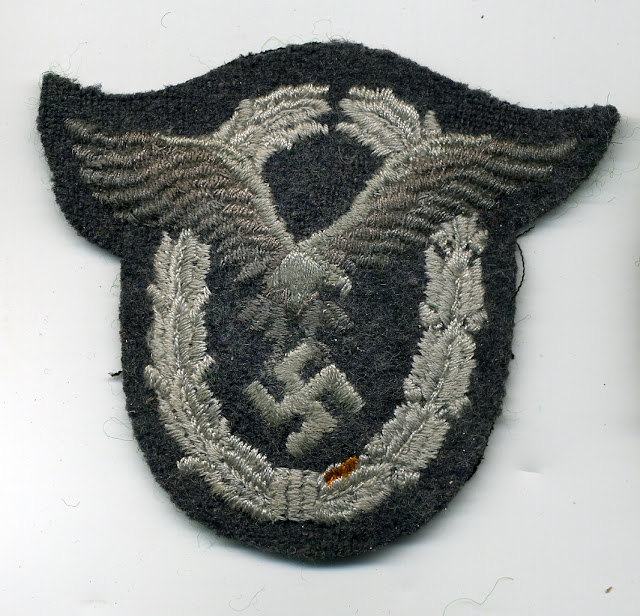 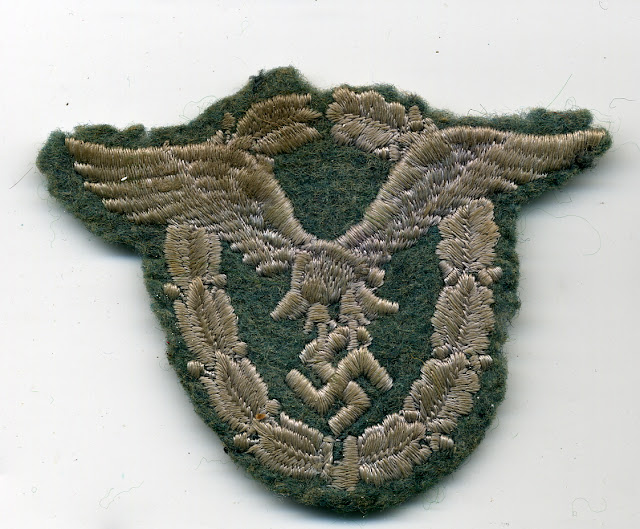 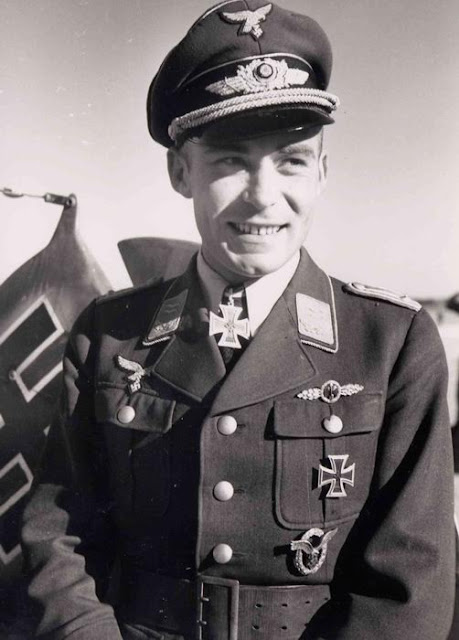 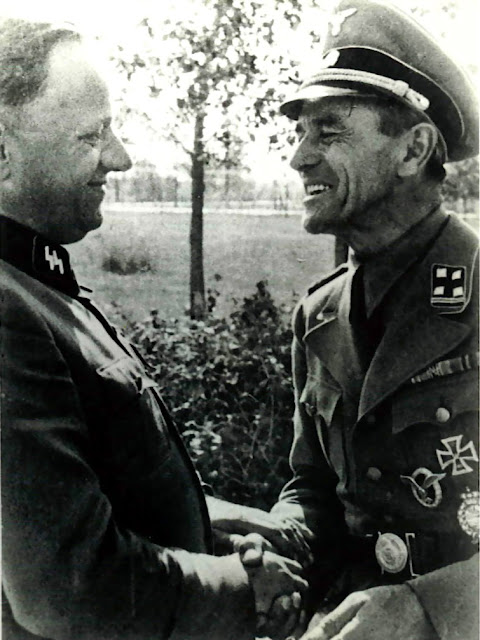 Pilots Badge in wear on a Waffen - SS officers tunic. He was a Pilot in the Bavarian Air force in the First World War.
Posted by Christopher Ailsby at 04:48