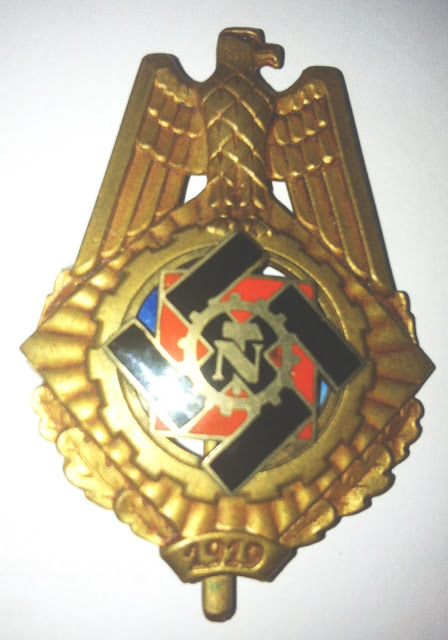 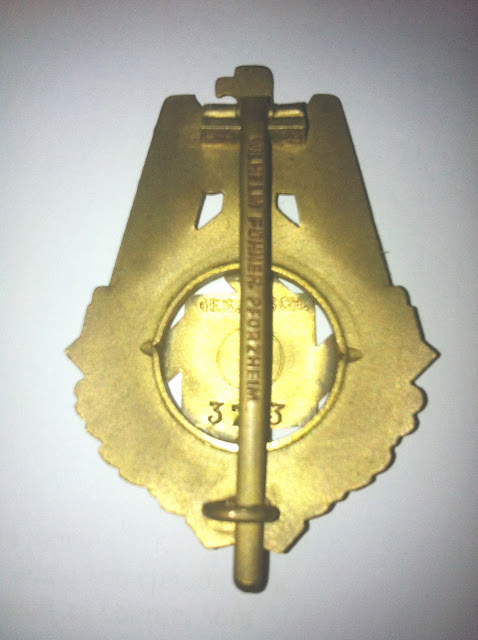 The Technical Emergency Service, (Technische Nothilfe-TN or TeNo) was devised and organised by the Weimar government and brought into being on 30th September 1919.  It composed of volunteer technicians and tradesmen who were to be employed to deal with strike emergencies, or the event of a general strike that might threaten Germany in the chaotic constellation of events that were emerging in Germany in this very troubled time.  The organisation continued in this role but, with Hitler's accession to power it became more integrated with the Nazi political troops.  It evolved into a large emergency force complete with a salaried cadre.  In 1937 it was to become absorbed by the police organisations which, in turn, eventually resulted in it being taken over by the SS organisation.  In the end, it virtually became a part of the general, (Allgemeine), SS acting in the capacity of pioneering or engineer units.

In the winter of 1934 a special membership pin was created to recognise the long service of its members but this was inadequate to denote visibly the period of involvement in the organisation. 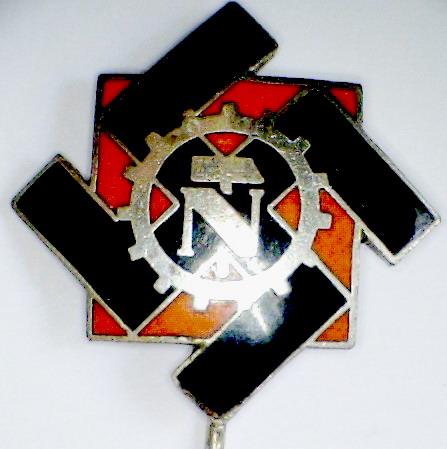 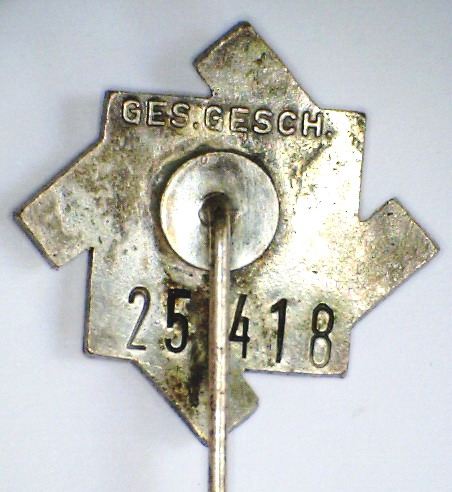 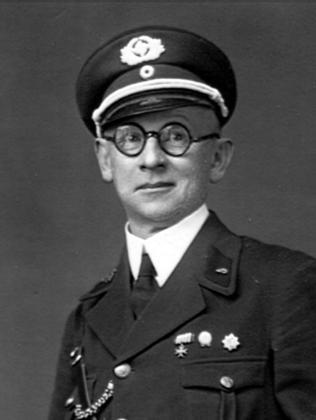 The shortcomings of the pin were overcome on 2nd April 1935 by the introduction of the Honour Badge of the Technical Emergency Service, (Ehrenzeichen der Technischen Nothilfe) and were to be presented to those members who had joined the TeNo between 1919 and 1923, both dates to be inclusive, and who had significantly contributed to the organisation and its aims.  How many of the members were eligible for the award is not known but the total number awarded is presumed to be very small. 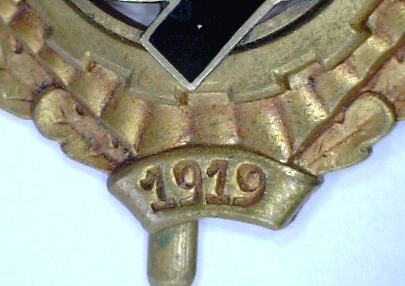 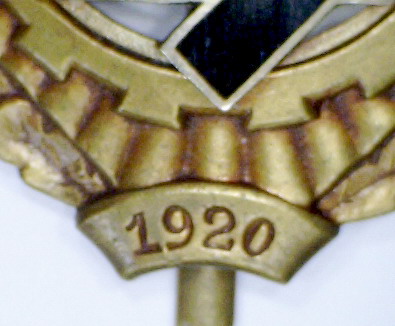 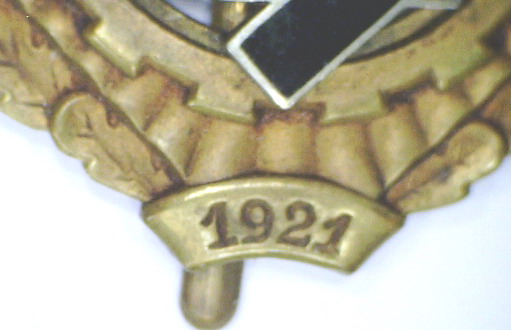 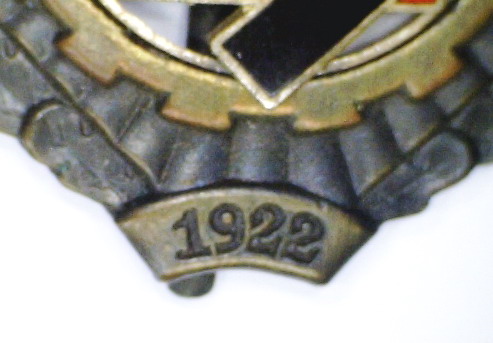 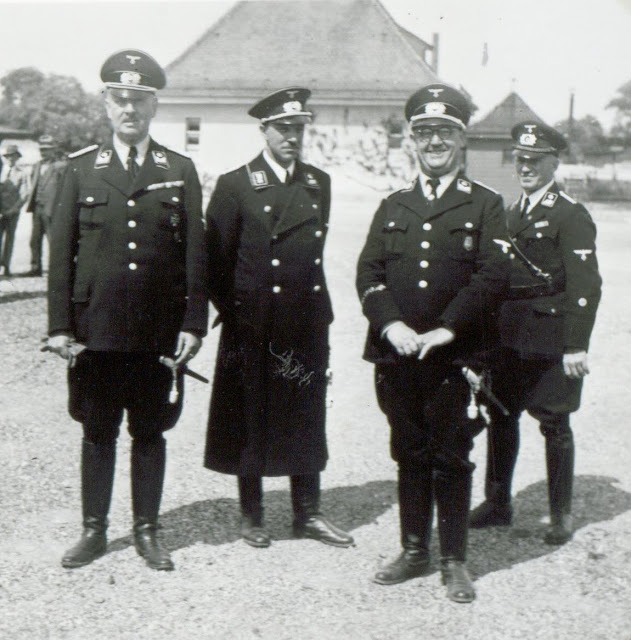 Honour Badge of the Technical Emergency Service in wear.

However, in June 1936 SS-Gruppenführer and Police General Weinrich, the leader of the Technical Emergency Service, (TeNo), ordered that the wearing of the Honour Badge should cease and that it would be replaced by a cuff title.  This is a black band which measures 23 mm in width and was worn on the right cuff.  It was to have the date of entry into the organisation, 1919-1923, woven in Gold wire thread, which was to be flanked by a bunch of three laurel leaves. 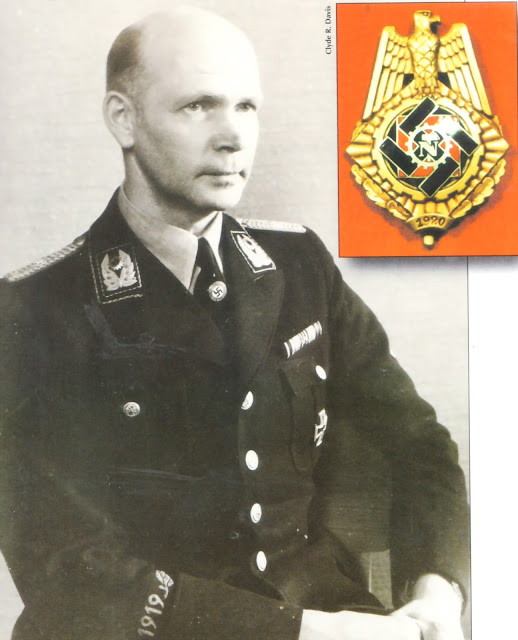 Stellvertretender Reichsführer Erich Hampe wearing the 1919 cuff title.
The growth of importance of the organisation and its new patronage led, in the spring of 1944, to the Honour Badge being authorised again for wear.  It was now to be worn on any uniform, not as it had been formally only on that of the TeNo.  There was even provision for it to be worn on the left lapel of civilian clothes.  It was now accorded the new title of the Loyal Service Badge of the Technical Emergency Service, (Treudienstabzeichen der Technischen Nothilfe).
The Honour Badge measures 48 mm high and 35 mm wide and weighs 14 grams.  It consists of a circular wreath of oak leaves which are slightly concaved with a faint outline of the veins of the leaves showing.  On to the wreath is superimposed a square with its points at 12, 3 6, and 9 o'clock respectively.  This exposes three oak leaves of the wreath on either hand on the two lower sides of the box, while the upper ones expose only half a leaf respectively.  The box has rays emanating from the centre that slightly widen towards the outer edge line and have eight on each side, the largest at each point.  The box is slightly concaved and has superimposed upon it, at the centre, a raised cog wheel that measures 24 mm across and 2 m from the outer edge of the teeth to the inner edge.  The centre of the cog wheel is therefore voided.  Into this is placed the central design of the badge which is raised above the cog wheel and is 1 mm in depth and convexed.  It consists of a brick red enamelled square with raised silver edge line.  Superimposed on to the square, with its arms on to the cog wheel is a black enamelled swastika with raised silver edge line.  The swastika measures 2 mm tip to tip and is fixed at its points to a circle which fits inside the void producing an inner recessed line to the cog wheel.  At the centre of the swastika is a further cog wheel that measures 11 mm across from the tips of the teeth. The rim is 2 mm across and has a capital 'T' at its centre, in the form of a labourer's hammer with, surmounting it, a capital 'N', all of which are finished in silver.  These emblems are the badge of the organisation.

At the top of the badge is a stylised eagle with its feet perched on the outer edge of the cog wheel at 12 o'clock.  The body and legs of the bird run together just leaving the bird's angles and claws separate.  The head is pronounced and facing to the viewer's right, with a large beak and determined hooded eye.  The wing formation is in the down swept rest position, with a bold upper raised fletch line comprising of four small feathers that curve upwards to the wing joint.  The wing is then a solid raised 2 mm line with an inwardly curved end which measures 22 mm from the tip to the top of the joint.  Beneath the upper curved feathers are two rows of slightly larger feathers which are recessed and follow the line of the upper ones, numbering four in each row.  From the outer straight line are three more similar ones with curved tips, which are stepped down in gradients with the area between the inner line of the wing and the body of the eagle, being cut out.  The design is repeated on the opposite hand.  At the base of the wreath and the box is a small curved panel, 3.5 mm high by 10.5 mm long on to which is impressed the date of inception into the organisation of the recipient and can be found with five dates, 1919, 1920, 1921, 1922 and 1923.
The reverse is plain with the raised retaining circle being evident and held into the badge's body by two clench marks, one on either side of the badge at 9 and 3 o'clock respectively.  The upper hinge is of good quality construction, being an 'on its side' type.  The lower hook is the standard 'C' form, while the pin is a broad blade type with horizontal sides.  On to the upper side is stamped in incused capitals is the maker's name, WILHELM FÜHNER.PFORZHEIM or KARL HENSLER PFORZHEIM. However in some later pieces the pin is slightly thinner and devoid of the makers mark. The reverse of the swastika and the red enamelled plaque has usually the inscription Ges Gesch in raised letters, although this is not always the case with badges with a date of 1922 and 1923.  The issue number of the badge is found stamped into the same place in small Arabic numerals. 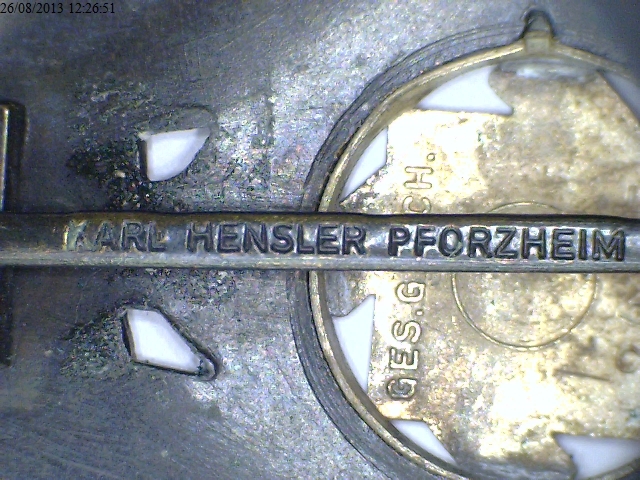 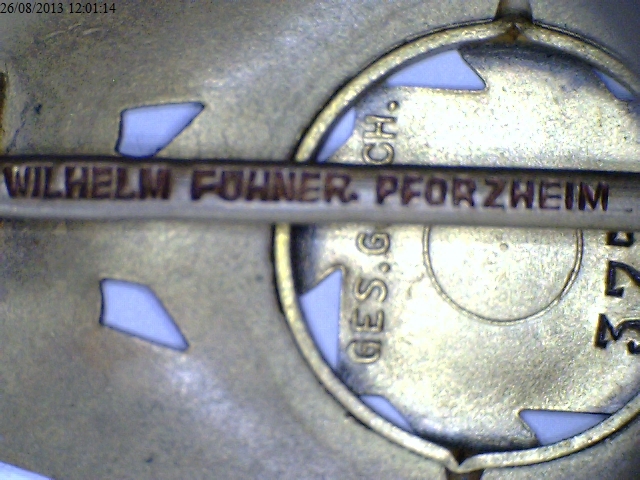 The badge was awarded in a hard presentation case that had a spring catch retaining the lid to the lower part of the box.  The outer lid and base were black simulated leather, while the base was white flock with a white padded silk liner. On the base of the box was a small label with the corresponding Badge number. 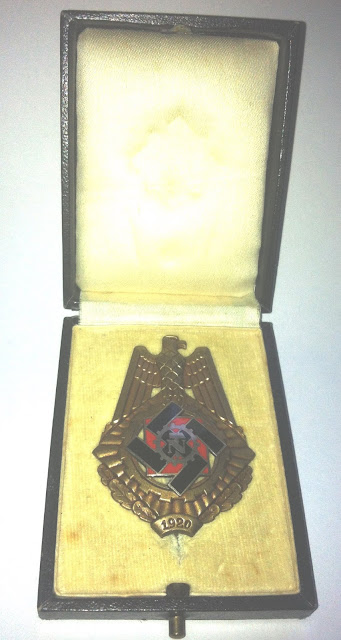 Honour Badge of the Technical Emergency Service in Case. 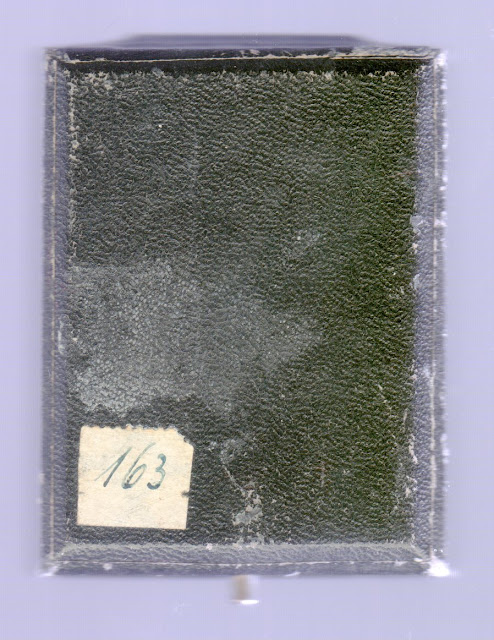 Honour Badge of the Technical Emergency Service - Case No 163. 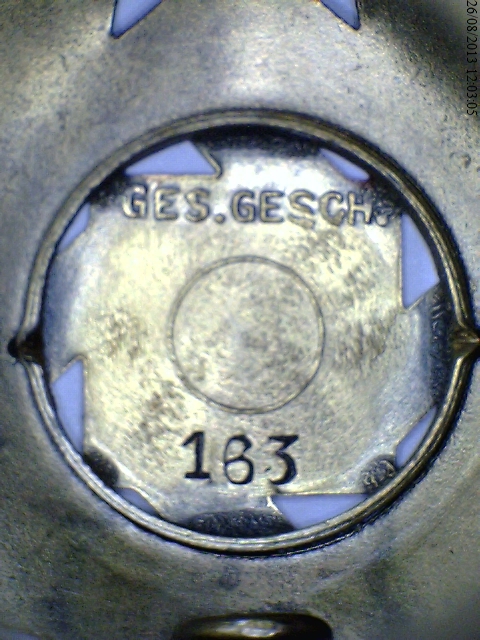 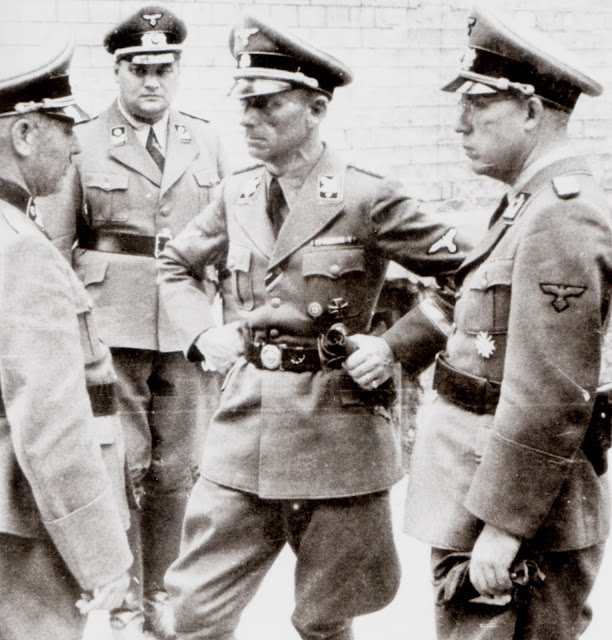 SS-Gruppenführer and Police General Weinrich.
It was accompanied by a citation that measured 300 x 420 mm and had an elaborate type style in four lines, URKUNDE, ber die Verleihung des, EHRENZEICHENS, der TECHNISCHEN NOTHILFE.  Beneath the title of the recipient and the town, a three line inscription followed; Wird mit dem Heutigen Tage das, Ehrenzeichen der Technischen Nothilfe, mit der Jaheszahl 1919 verliehen.  Beneath this is Berlin and the date, under which, in two lines, is der Reichsfhrer der Technischen Nothilfe followed by the awarding officer's signature.  On the left side, at the bottom, is a line drawing of the badge with the date 1919.  The citation was altered for each of the years that were represented.  It is also possible to find diverse versions of the award citation with all the awards. 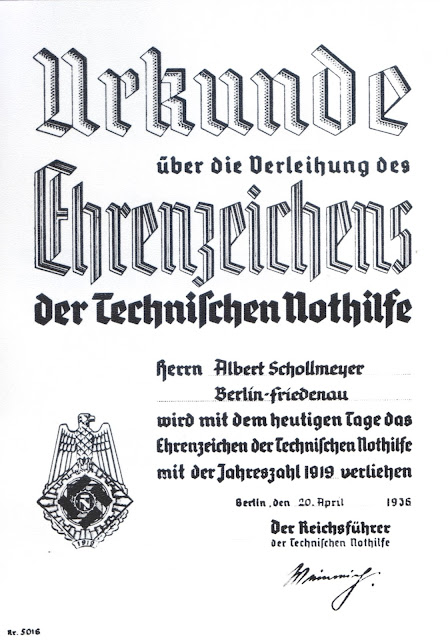 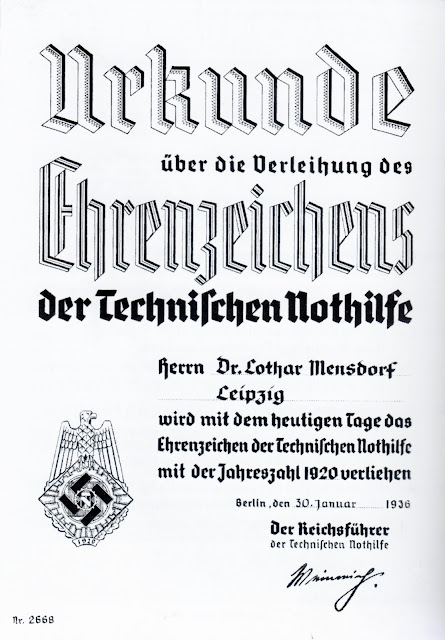 
Posted by Christopher Ailsby at 13:00