This award comprises of an oblong box that measures 56 mm long by 9 mm wide. The width of the metal that forms the box is 2 mm. with a depth of 1 mm. Onto the centre is superimposed the SS Sigrunen, these are segmented and joined at the centre. From these on either side is a straight line of three oak eves, tip placed over the base of the proceeding leaf. Placed onto each leaf in raised capital letters is the word HEL on the left of the SS Sigrunen, and FEN on the right.


The reverse shows the box construction and two more bars indented by 4 mm, one at either end. On the right side bar is the hinge and the left the hook which is an open double C claw. The pin is of thin pin type that is drawn with a sharp upper and lower edge. Onto the reverse of the leaves on the left side is the silver mark 800 and the right the serial number. There is no doubt, that those silver clasps were awarded, but in very low numbers.


The Silver Clasp for Female S.S. Auxiliaries was mentioned for the first time in the internal daily bulletin in the staff regulations for the SS-Auxiliaries of the Waffen-SS. In this staff regulation dated 28th of July 1943 – it was stated for official use only – it was decreed:


'As an award for good achieve and a clear, clean and worthy attitude of the German Woman, the silver clasp will be given to the SS-Auxiliaries after a reasonable time of trial and probation through the chief of telecommunications with a special document and a number. The silver clasp is an award, which must be worn on the uniform and on duty, but also out of duty it is to be worn on civilian dresses. By violation against official duty or bad behaviour the silver clasp can be withdrawn for a constrained time or for ever.'


In the interim order of regulations for SS-Auxiliaries' dated the 2nd of February 1944 it is decreed on page 8 under clause no. 30:


'SS-Auxiliaries can be recommended after a two-years membership to the chief of communications for consideration of the possibility of proposal for awarding the silver clasp for SS-Auxiliaries (here called brooch) by the Reichsführer SS, so long as they have proved successful and always shown a clear, worthy attitude of the German woman. By the naming is a high standard to set.'


On 31st of July 1944 the personal headquarters of the Reichsführer SS sent a covering note to the SS-Hauptamt in Berlin stating, that the design for the document would be submitted by 20th of July 1944, by the SS-Obergruppenführer, who had sent designs for the documents of the silver clasp for the SS-Auxiliaries that would remain in the records of SS-Standartenführer Dr. Brandt. 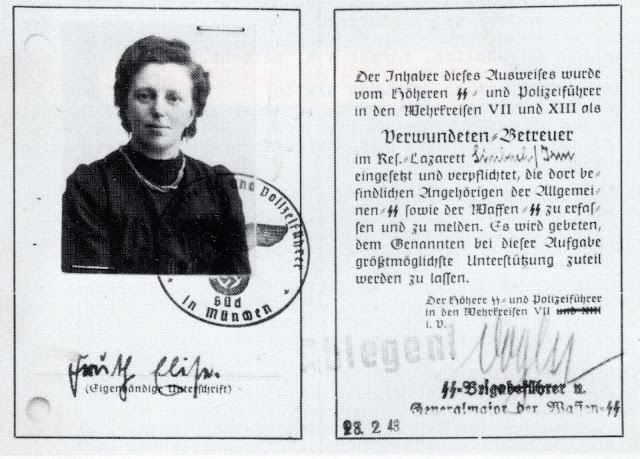 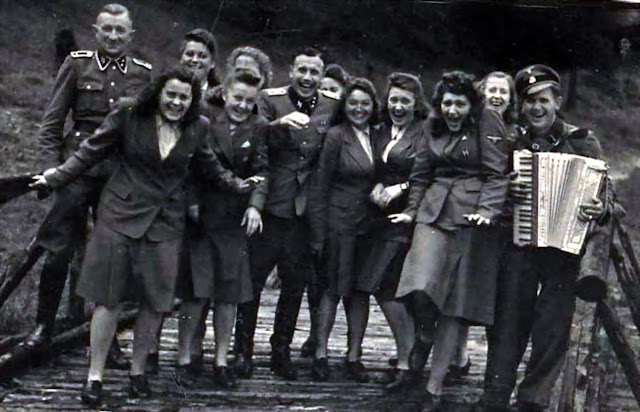 Posted by Christopher Ailsby at 12:46