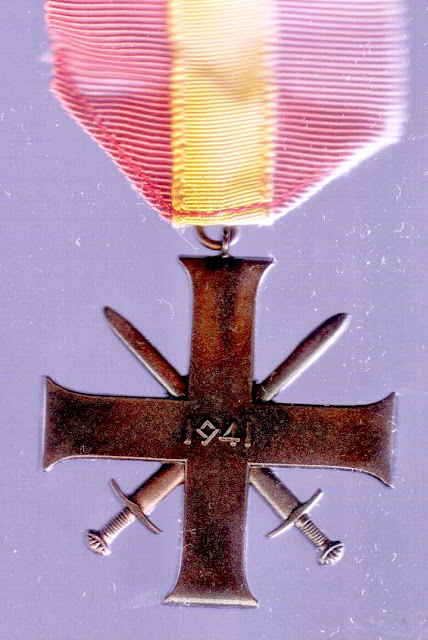 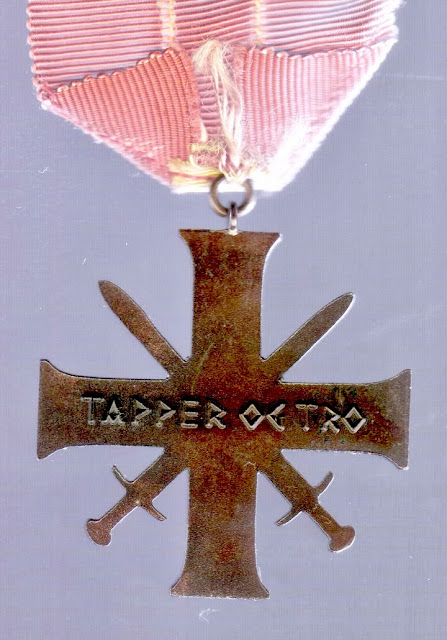 ‘TAPPER OG TRO’  2nd Class - Reverse.
The design of the three classes of the award are the same and comprise of a Bronze Latin cross that measure 44 mm across with out-turned ends to the arms. Between the arms are crossed swords. At the centre is the date in raised numerals 1941, the date of the invasion of the Soviet Union. The reverse is flat save for across the central arms the inscription ‘TAPPER OG TRO’, Bravery and Loyalty, in ‘Nordic’ script. In the case of the 2nd class on the upper arm is a wire eyelet that is 90% to the arm of the cross through which is placed a small ring. This has attached to it, by sown thread, a ribbon that is an orange red that measures 44 mm. Onto the centre is machine sewn on top a piece of yellow ribbon tape that measures 12 mm. The length of the ribbon that is machine sown across the top is 130 mm long. 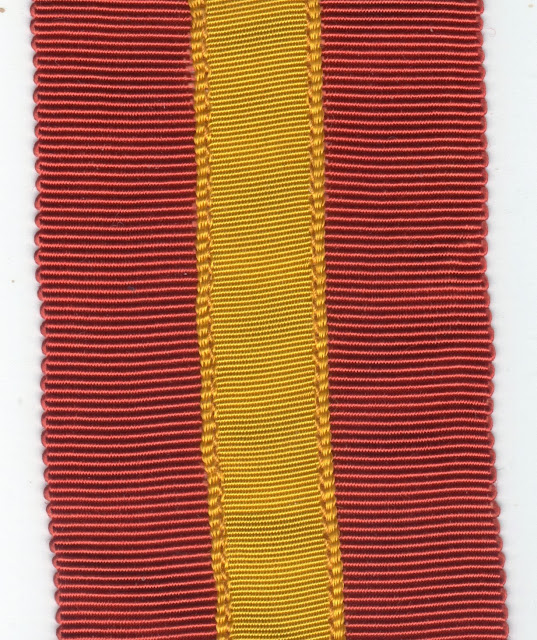 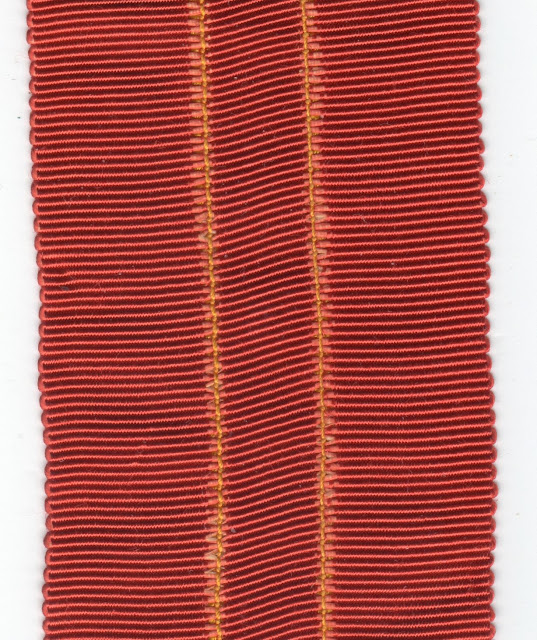 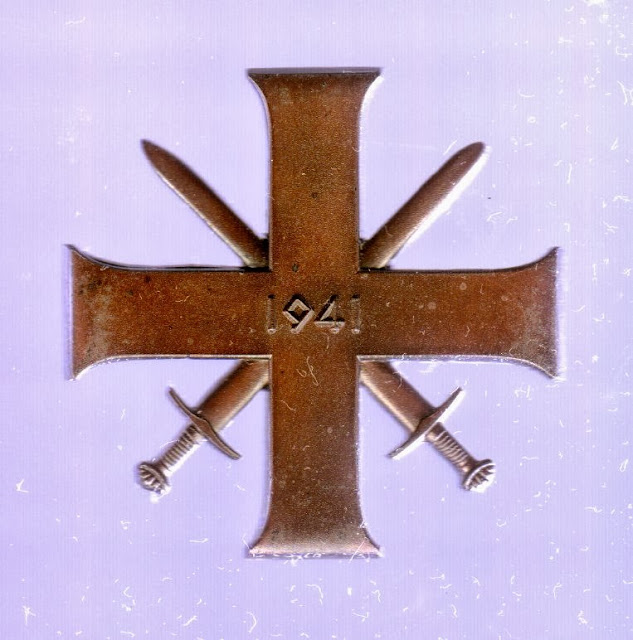 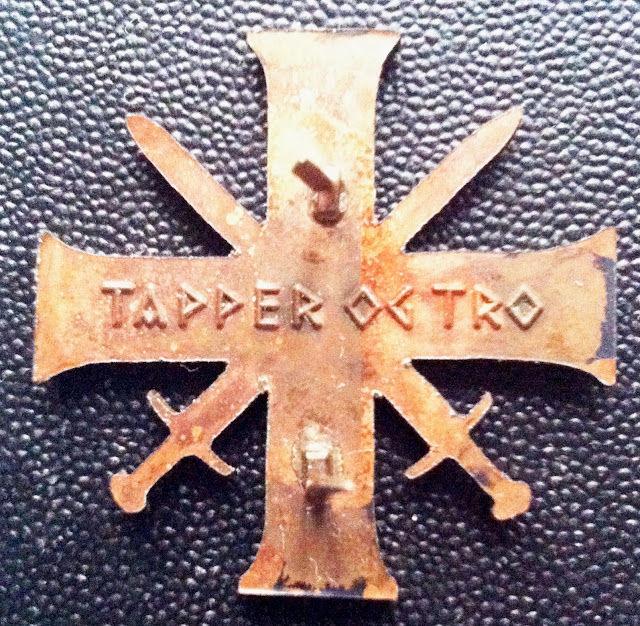 ‘TAPPER OG TRO’  1st Class - Obverse.
The 1st class was the same design, but was a breast cross. The reverse was not “pin – backed” in the normal manner, but attached to the tunic by two lugs which had to be punched through the fabric and then bent flat.
‘TAPPER OG TRO’ Knight’s Cross.


﻿
The  Knight’s Cross, again was the same design, but in this case the wire eyelet that is on the upper arm is in line to the arm of the cross through this is an elongated thin wire suspension loop that is approximately 30mm. 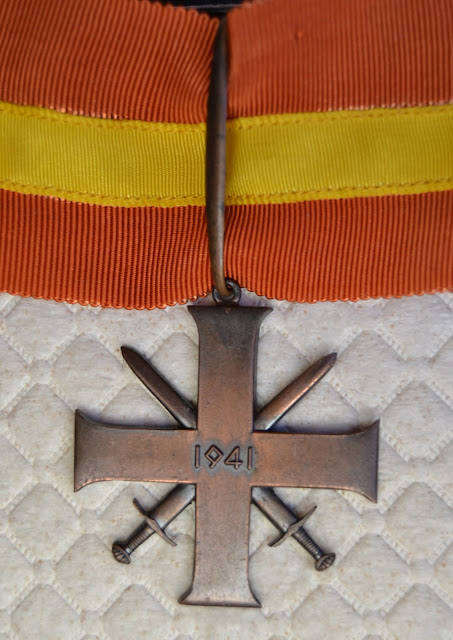 ‘TAPPER OG TRO’  1st Class Cased.
The awards are housed in an oblong black card box with light pebbling. These measures 104 mm by 84 mm. the lid is hinged with paper the base is removable and constructed of diamond embossed cotton. 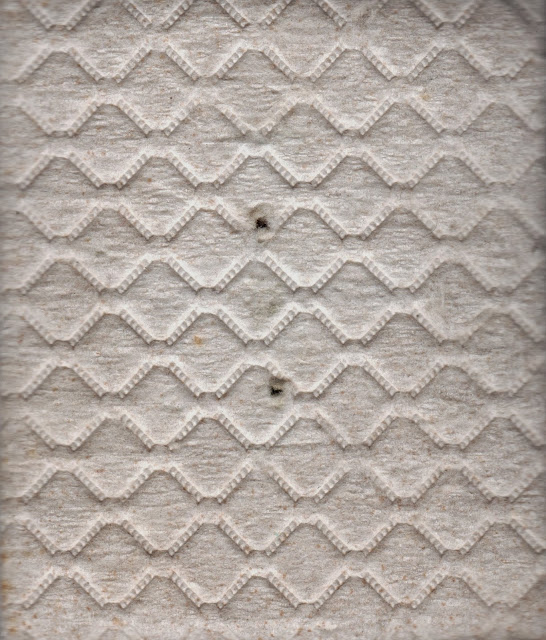 This Order in the three classes’s, began life as the ‘Order for Bravery and Loyalty’, instituted by the collaborationist Nasjonal Samling government under Vidkun Quisling in 1941 to be awarded to Norwegian front Fighter in much the same manner as the German Iron Cross. Shortly afterwards, however, Josef Terboven, German Reichskommissar of Norway, dictated that only German awards were to be worn by Norwegian collaborationist forces. Terboven and Quisling had a long history of rivalry and disagreement with Terboven doing his utmost to minimise the influence of Quisling, despite the orders of the Führer Adolf Hitler to help build the Nasjonal Samling. The Order was thus awarded for only a very brief period. It is thought at least one 1st class and one 2nd classes had been awarded.
Posted by Christopher Ailsby at 07:32