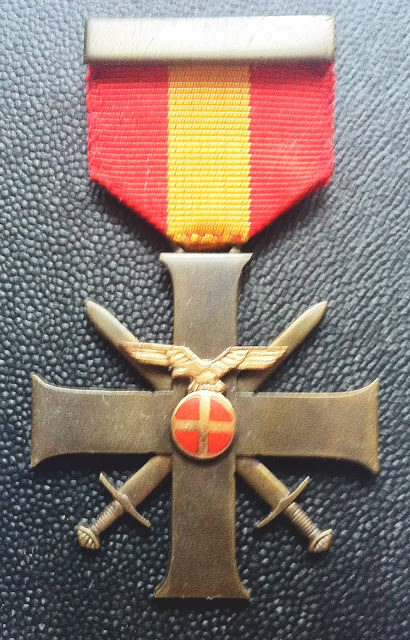 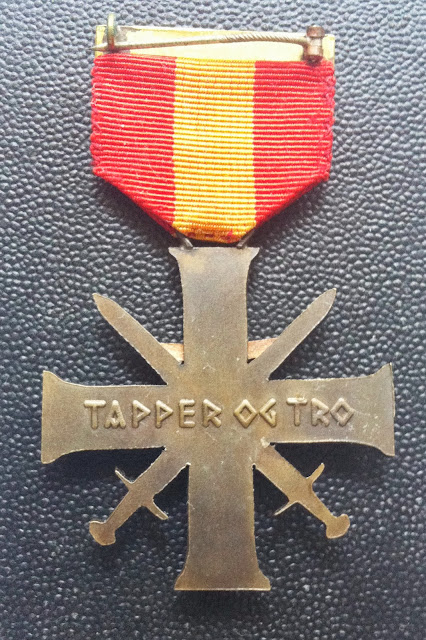 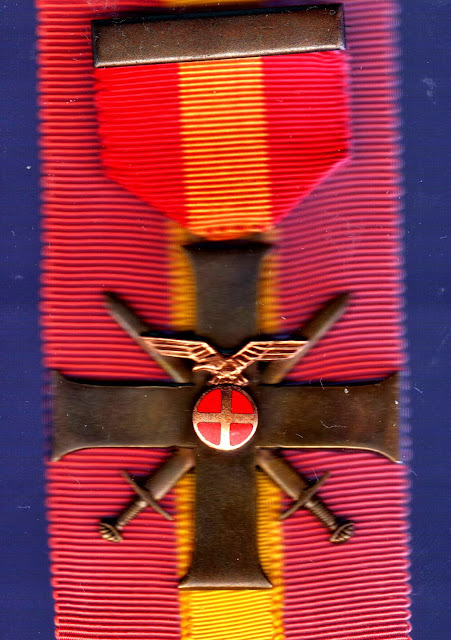 “Tapper og Tro’ Korset”,  2nd Class - Political - Obverse over laying the ribbon of the  “Tapper og Tro’ Korset”,  2nd Class.
The design of the three classes of the award are the same and comprise of a Bronze Latin cross that measure 44 mm across with out-turned ends to the arms. Between the arms are crossed swords. At the centre, instead of the date in raised numerals 1941, in the case of the 1st and 2nd class, is placed the emblem of the Nasjonal Samling party which was the sun cross of St. Olaf, the fields of which were in filled with red opaque enamel, and placed in the talons of an open winged eagle that is gilded. The reverse is flat saving for across the central arms the inscription ‘TAPPER OG TRO’, Bravery and Loyalty, in ‘Nordic’ script. In the case of the 2nd class on the upper arm is an oblong fine wire box through which the ribbon is placed. This comprises of an orange red band that measures 30 mm which is segmented into three 10 mm widths of orange red, orange yellow, orange red. At the top is a bronze bar 31 mm by 6 mm which has a pin hinge and wire C hook
The 1st class was the same design, but was a breast cross. The reverse was not “pin – backed” in the normal manner, but attached to the tunic by two lugs which had to be punched through the fabric and then bent flat.
The Knight’s Cross, might very well be a cross of the same design, but with four Party emblems superimposed over the swords in the angles of the cross. The date 1941 being at the centre. The cross was suspended from a suspender as described in the 2nd class. The ribbon comprises of an orange red band that measures 30 mm with two narrow yellow inset side stripes. It has been stated that this design of cross was produced in the 70’s by a Jeweller in Denmark from “Tapper og Tro’ Korset” - Bravery and Loyalty Cross. - 2nd Class enhancing it with Party emblems. The example shown was from the Dodkins collection and obtained in the 50’s. The photo was used in David Littlejohns book published in 1973. 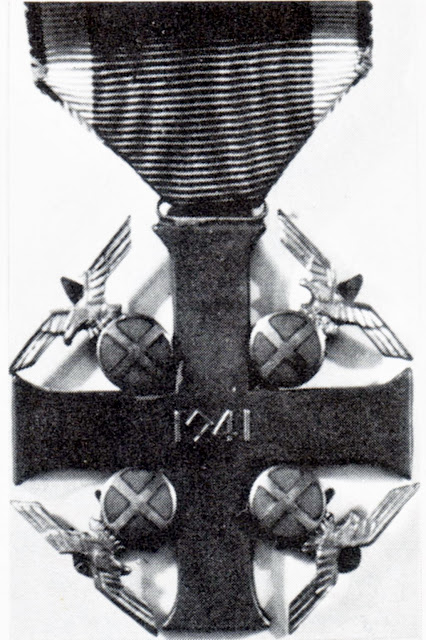 In 1944, the Order was reassigned as an award for bravery in Norway and was awarded to members of the Nasjonal Samling, such awards being referred to as ‘politisk utgave’ political awards. At this time it is possible that the Order was also reorganised into three new grades, thus the 2nd class became the 3rd class, the 1st class became the 2nd class and the creation of a new 1st class as described.
The awards are housed in an oblong black card box with light pebbling. These measures 104 mm by 84 mm. the lid is hinged with paper the base is removable and constructed of diamond embossed cotton. 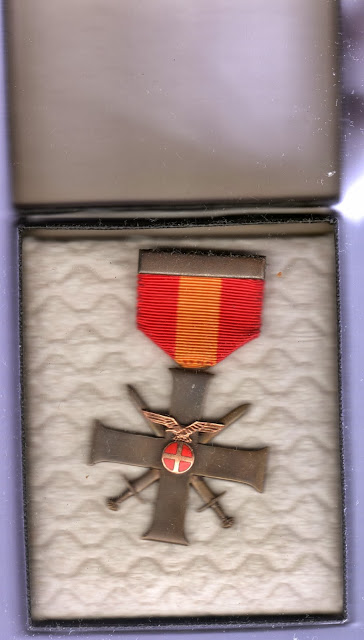