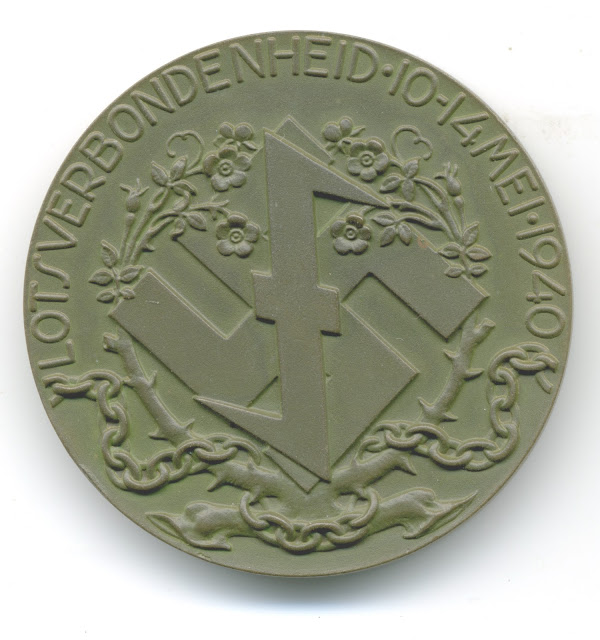 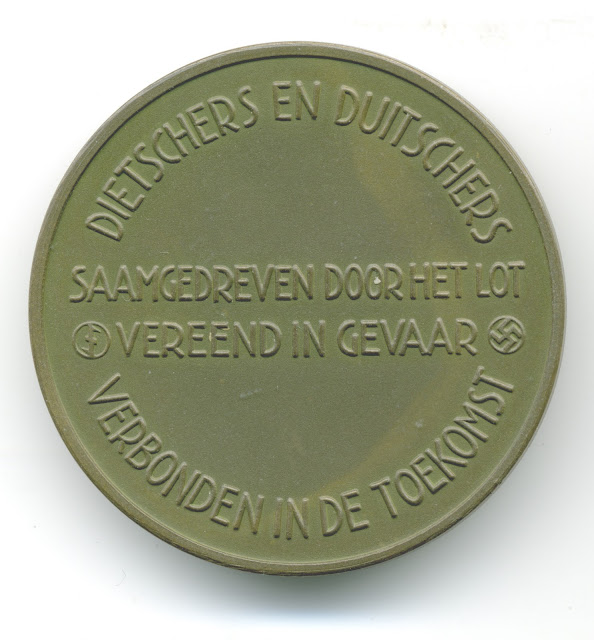 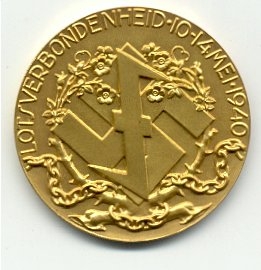 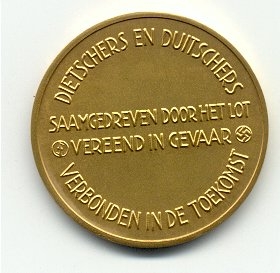 This medallion measures 40 mm and is struck in fine bronze that has a light green patination.  The obverse has a flat flan on to which is superimposed a swastika at the centre, with a wolf hook, or wolf's angle, over it.  From the base of the swastika is the root of a rose bush that throws up two branches to form a wreath round the swastika, which meet at the apex with two rose flowers on either side of the wolf hook.  Around the trunk of the rose and over the branches runs a chain, snaking its way to the edge of the medallion on either side.  From this point, on the left-hand side, runs the circumscription in raised, capital letters, 'LOTSVERBONDENHEID . 10 - 14 MEI . 1940', which translates to, Fateful Union . 10 - 14 May . 1940.


The reverse has a raised 1 mm edge line and a flat central field.  Across the centre in raised capital letters, is the two line inscription, 'SAAMGEDREVEN DOOR HET LOT, VEREEND IN GEVAAR', this translates to, By Destiny Drawn Together, United in Danger.  There is a small wolf hook in a circle at the beginning of the second line and a swastika in a circle at the end.  Above the inscription is the circumscription in similar raised capital letters, 'DIETSCHERS EN DUITSCHERS' and below, 'VERBONDEN IN DE TOEKOMST', which translates to, Dutchmen and Germans Allied for the Future. The medal was designed by NSB-member and artist F. Gerdes. All examples were made by the 'official' Dutch medal producing company 'Koninklijke Begeer'.


Mussert instituted this medallion or Gedenkpenning in the autumn of 1940 for all those who had, in May 1940, been interned by the Dutch authorities on account of their political sympathies.  Besides NSB members, also German Citizens that were interned in the Netherlands during the same periods could receive the medal. The obverse design, according to the official description, stated that emblematically the thorns represented suffering, the roses the chastening effect of suffering and the broken chains, liberation.


The medallion could, in exceptional cases, also be awarded to Germans who had made outstanding contributions to the cause of understanding between the German Nazi Party and the NSB.  A special gold medallion was awarded three times to, the Reichskommissar Arthur Seyss-Inquart, Fritz Schmidt the general commissioner for special affairs having the special responsibility for liaison duties with the NSB and SA Oberführer Siebel, who acted as liaison officer between the Nazi party and the NSB.


The medallion was presented in a 48 mm square box that was produced in off white card.  On the lid is a black cartouche with the lettering in white, in three lines,  '10 . 14, Mei, 1940'.  The upper, inner lid and lower portion of the base are lined with grey-green felt. 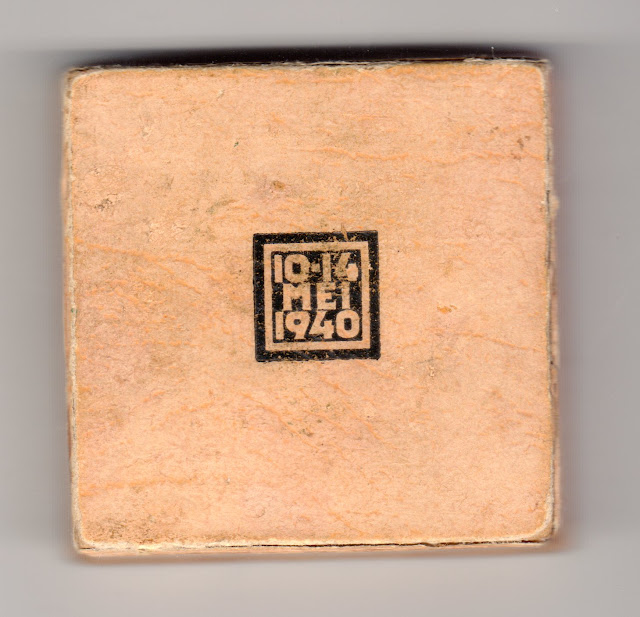 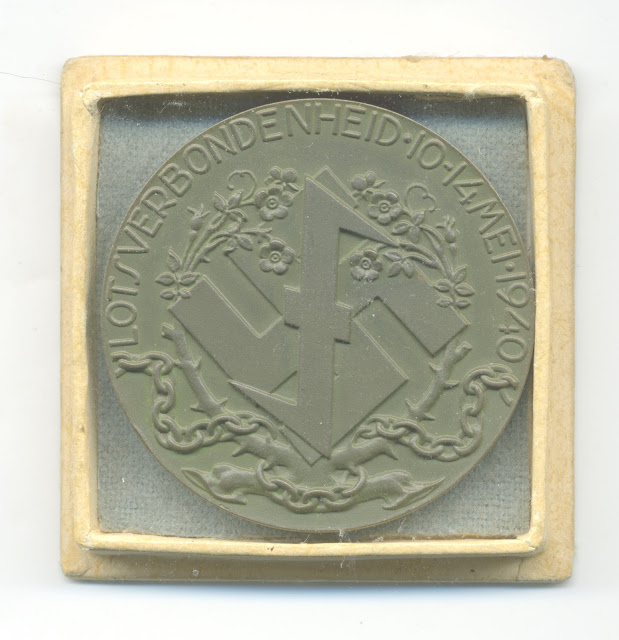 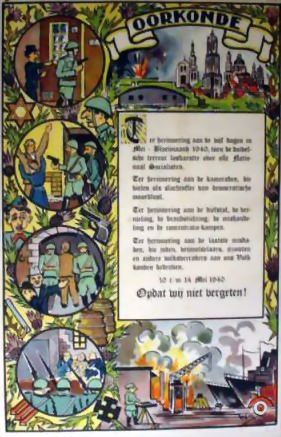 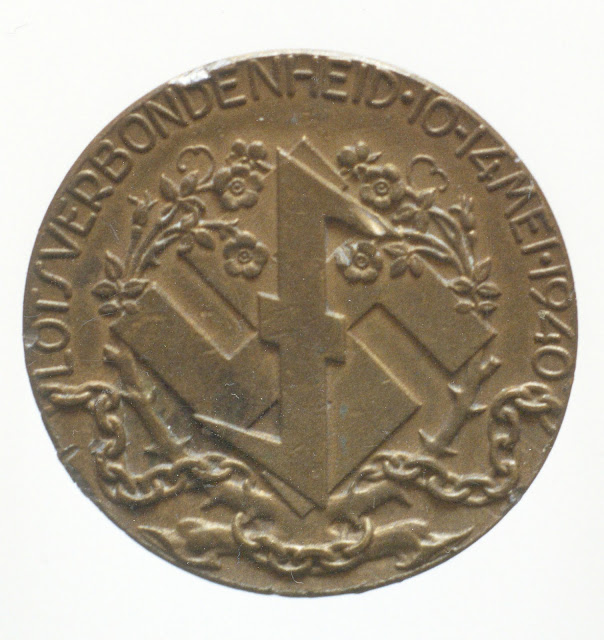 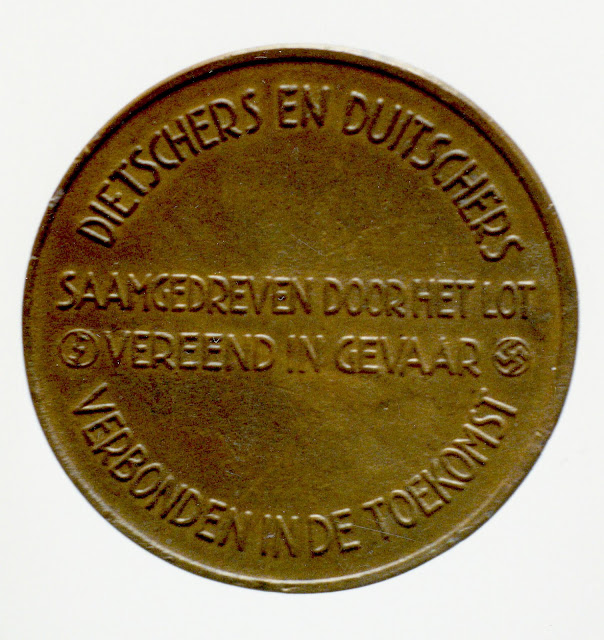