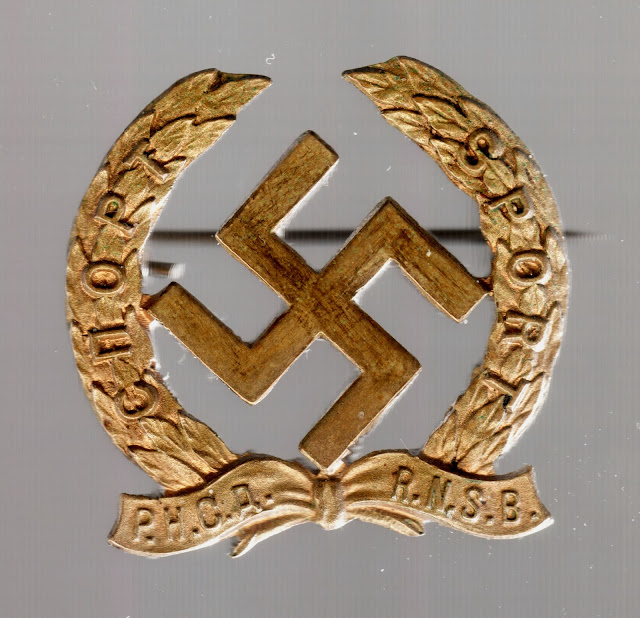 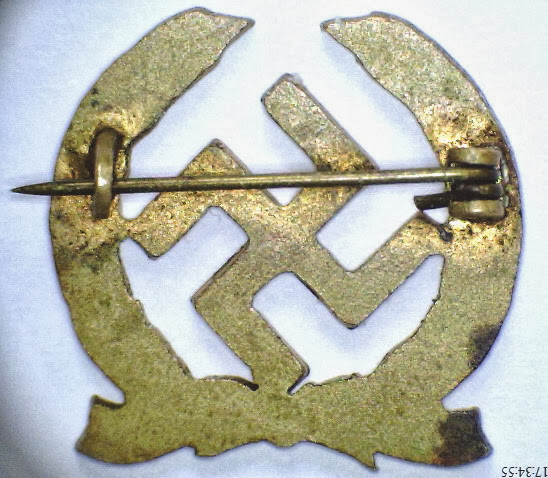 
This award takes the form of an open ended wreath of laurel leaves. Each side has nine bunches of three leaves. At the base is an elongated ribbon bow with central tie. At the centre is a mobile swastika. The badge measure across 25 mm by 24 mm high. On the left of the wreath in raised Cyrillic capital letters are C N O P T and on the right S P O R T. On the ribbon bow on the right R. N. S. B. and on the left P.H.C.A. The reverse is flat with a horizontal pin construction, this comprises of an open hinge through which is wound a thin needle pin this is secured by a “C” catch.
The function of this award and if it was in three grades is unknown. However it can be considered that this was a military orientated Sports award, in possibly the same way as the SA Sports badge of the NSDAP.


ROND – Rossiiskoye Natsionalno – Sotsialistcheskoye Dvizheniye ( Russian National Socialist Movement), was founded in Berlin by A.P. Svetozarov in February 1933, within weeks of Hitler’s coming to power. Svetozarov was replaced fairly soon after by Prince P.M Bermondt – Avalov, a veteran of the 1919 Baltic campaign which had driven the Bolsheviks out of Latvia. ROND members would parade alongside Hitler’s Storm troopers in their own version of Nazi uniform, this comprise a white shirt with black breeches and top boots. On the left upper arm they wore a red brassard with a white swastika on a blue square, the old Czarist colours. ROND opened branches in Paris, Prague, Belgrade and London in an attempt to form a united anti – Soviet front among the many exiles resident in those cities. In this it was wholly unsuccessful. The Nazis had been willing enough to accept support from the émigrés in the early days when anyone prepared to fight against the Red Front was welcome in their ranks. After 1933 and established in power, they tended to look down on these Slavonic caricatures of themselves. It was, after all, part of the Nazi ethos that all Slavs belong to an inferior breed. The ROND – Nazi relationship continued along uneasy until the German – Soviet Pact of 1939 brought all anti – Russian activities within the Reich to an abrupt halt, at least in their public manifestation. ROND was closed down, but one part of it, its Ukrainian Section, continued to function clandestinely under the patronage of the Abwehr. It was to play an important role in later operations in that part of the Soviet Union after Hitler’s invasion of Russia. The Ukrainian section was taken under the wing of Admiral Canaris, head of German Military Intelligence, the Abwehr. It was absorbed into an amorphous unit known at that date as Lehr und Bau Kompanie z. b. v. 800, Training and Construction Company for Special Purposes No. 800, which later, greatly enlarged, was to win fame as the Brandenburg Division. It was a combined commando and espionage formation which embraced a score or more different nationalities. 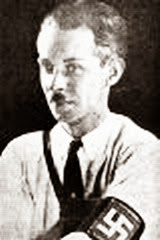 Posted by Christopher Ailsby at 11:01