The basic design of these three badges is the same with only the colour of the Class differing to indicate the grade of the award.  The badge comprises of a Tyr-Rune or runic T, which measures 51 mm high and 6 mm across the arm.  On to this is superimposed a circle that measures 30 mm across and 7 mm wide, with a voided centre.  Upon this is a swastika, which is just proud of the rest of the badge.  The gaps between the arms of the swastika have nine fine 'V' shaped lines.  On to the flat field of the circle is superimposed, in raised sham runic script, 'FÜR LEISTUNEN IN DER HJ', which translates to, For Proficiency in the HJ.

The reverse was plain with a pin that varied in size and was held to the centre of the swastika with a plate.  The design of this can also vary quite considerably.  It has the RZM logo and the M1/ and the maker's number with the badge issue number stamped in.  An A B or C grade to denote the proficiency achieved in the relevant class, was sometimes stamped on the reverse of the badge but most examples are without this, as the entry in the proficiency book was relied upon as proof of attainment.

The award was instituted in three classes in June 1934 by Reichsjugendführer Balder von Schirach, as an incentive to improve the physical and ideological proficiency of the varying age groups of the growing membership of the Hitler Youth.  It was stated at the time that the HJ achievement badge was a prestigious award which every fit and ambitious Hitler boy and HJ leader should aim for. It was only to be awarded by the Reichsjugendführer to those who meet the stringent requirements that had been laid down. Those who wished to be awarded the badge would have to take a very keen part in at least 8 ideology study periods. These would be held as part of weekly meetings. All members of the Hitler Youth were issued a Leistungsbuch to record the achievements of the members and then to act as a certificate of proficiency. For members of the Marine-HJ and the Motor-HJ there were to be additional tasks, which would test the disciplines specific to these respective organisations. DJ and HJ boys were issued a book with one set of grading standards while the JM and BDM girls were given a book with another set. The award was primarily intended to test the abilities of the members in the following areas, Sport, Small-calibre (or air-rifle) shooting and Field Exercises.

The achievement badge was awarded on three levels: 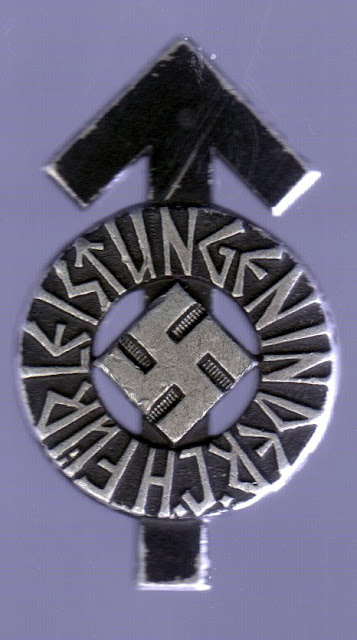 Iron Class  - (Grades A, B, C).
This class could be awarded to DJ and HJ members, and was restricted to boys of fifteen years old.  After 26th September 1935 with the introduction of the German Youth Proficiency Badge, the DJ members were no longer eligible and took a qualifying test for their own badge. 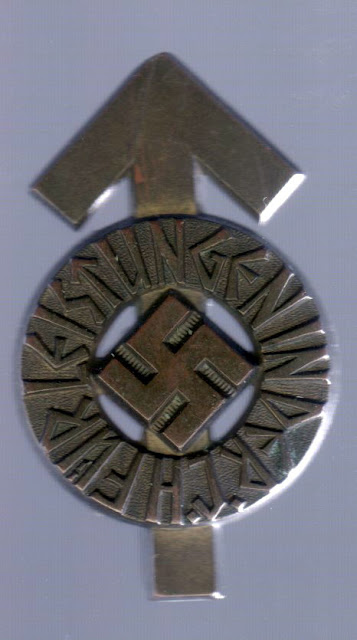 This badge was awarded to sixteen-year-old boys of the Hitler Youth. 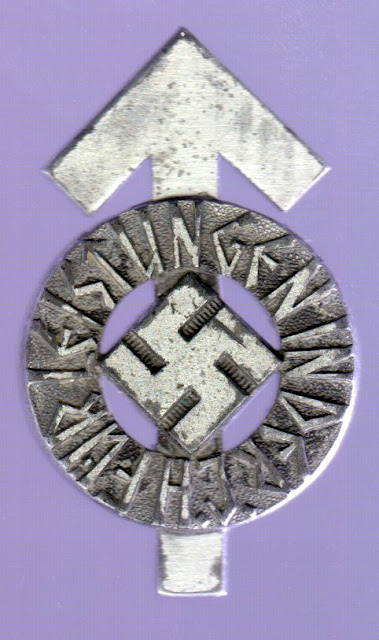 Silver Class -  (Grades A, B, C).
This badge was awarded to seventeen-year-old boys of the Hitler Youth.

The members undertook a test leading to an award of the badge that consisted of a four-part test, which showed clearly how all HJ training was military oriented.

The tests were the same for all three age groups but the scoring varied.

The fourth test of political knowledge was dropped during the war, when the emphasis was on physical fitness and Para-military training.  The flying HJ, motor HJ and marine HJ had additional tests appropriate to their speciality.  The regulations also stated that where swimming facilities were not available, speed cycling could be substituted.  The route march had time limits within which the distance had to be covered and these also varied with age. Capable people should be educated to become strong in mind and body and to be filled with national socialist will. These awards did not require exceptionally high individual achievement. Good results in all aspects of physical fitness would however be required. The aim was a varied and harmonious physical education for each German boy and the physical toughening of 's youth in general with a unified aim and a clear direction.


Requirements for the achievement tests

2. Shooting:
Small-calibre*, target distance 50m. 12-ring target with rings spaced 1cm apart. Each shot is to be indicated before firing is resumed.

5 shots in the prone supported position. No shot is to be worth less than 4 points. Alternatively: 5 hits on target to achieve a total of 25 points or more.

Club-throwing accuracy test: distance increases to 20m for Level B and 25m for Level C. Shooting: Level B.

Shooting: Level C. (must be small-calibre)

The tests are considered successfully passed if at least 50% of the features are identified and described correctly.

Errors greater than 30% constitute a fail.

Level A - Demonstrate knowledge of the contents of a verbal report. Fill out a report card
Level B - Memorise and pass a simple verbal report
Level C - Pass a self-prepared verbal report concerning an enemy position.

7. Approach to the enemy

Those were the requirements for the standard HJ achievement badges. The Motor-HJ and the Marine-HJ had specific tests, which replaced parts of the standard testing. Translation continues:

Note: The Motor HJ and Marine-HJ were awarded the same achievement badge (HJ-Leistungsabzeichen) as all other sections of the Hitler Youth but the testing included a section specific to both specialist arms and I'll detail this below. Only boys aged 16 and 17 years or over (Level B and C) were subject to these additional tests.

Level A: Answer three questions related to the actions of a driver before, during and after a journey. Replace the front wheel of a vehicle.


Level B: Assess the condition of a vehicle (to be provided) with regard to traffic regulations. Replace the rear wheel of a vehicle. Perform two driving skill tests. Complete a cross-country drive over moderate to difficult terrain.

The Marine-HJ was not required to complete the foot march over 10, 15 or 20km


Some of the things mentioned in the following section are not tests but rather prerequisites. See 'Seamanship' which indicates that the disciplines were not tested but rather that they were prerequisites for any boy wishing to achieve his badge. Much like the requirement to have a pen in your hand if you plan to write a letter.
.
IIIa Marine Sport

In 1934 issue figures were; Bronze 35900 and Silver 76100.  War brought not only a great expansion of numbers conferred but also an extension of eligibility to non German counterparts who were boys from the pro Nazi movements of occupied Europe, so by the end of 1943 when the last accurate statistics were available, the numbers awarded had risen to; Bronze 103061 and Silver 217093. 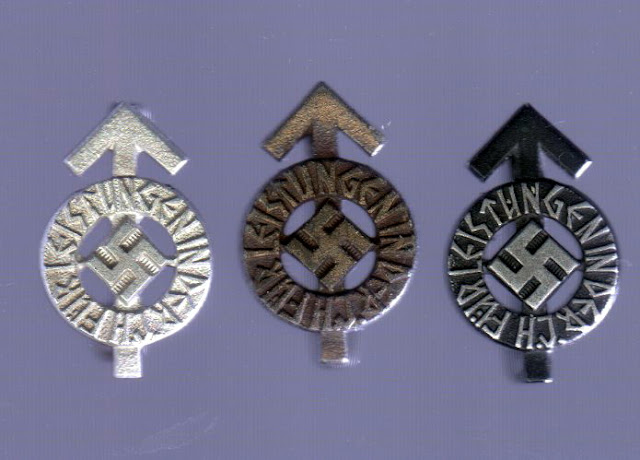 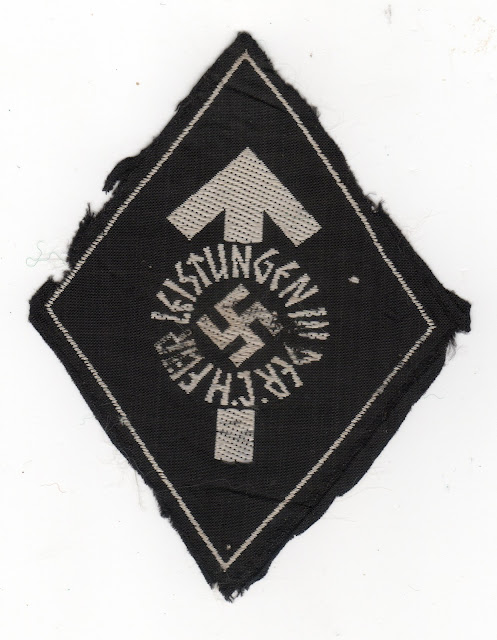 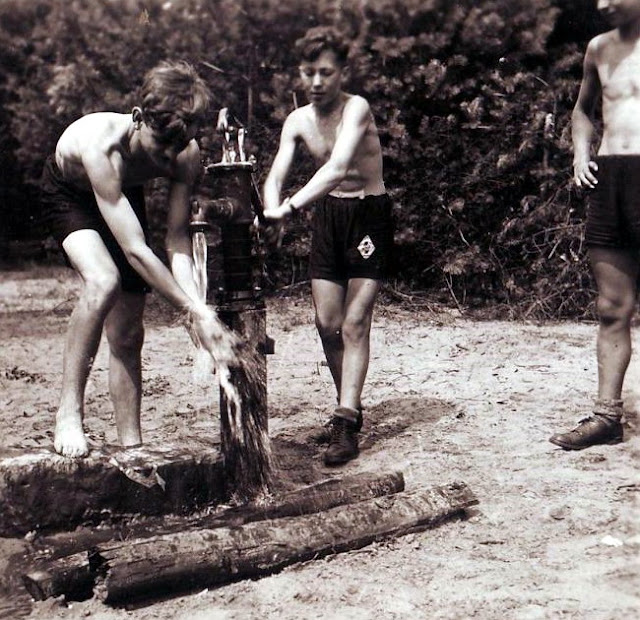 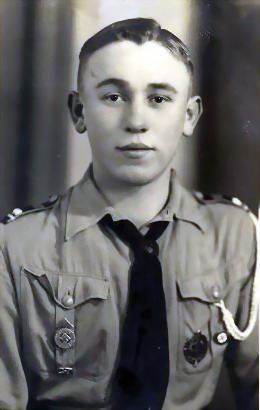 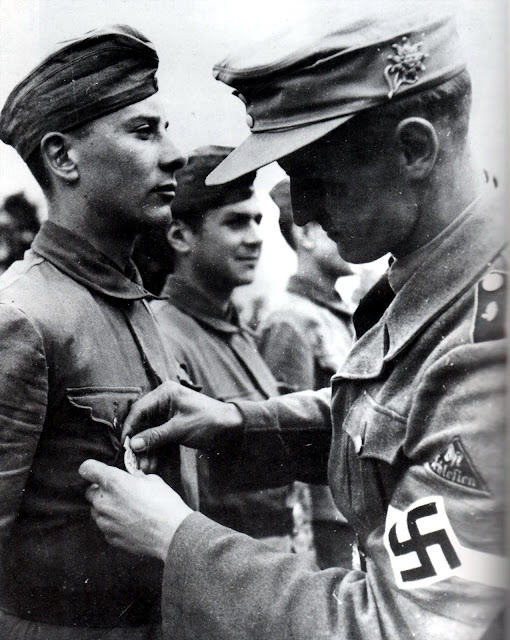