Medallion for the Furthering of the Hitler Youth Hostel Building Programme 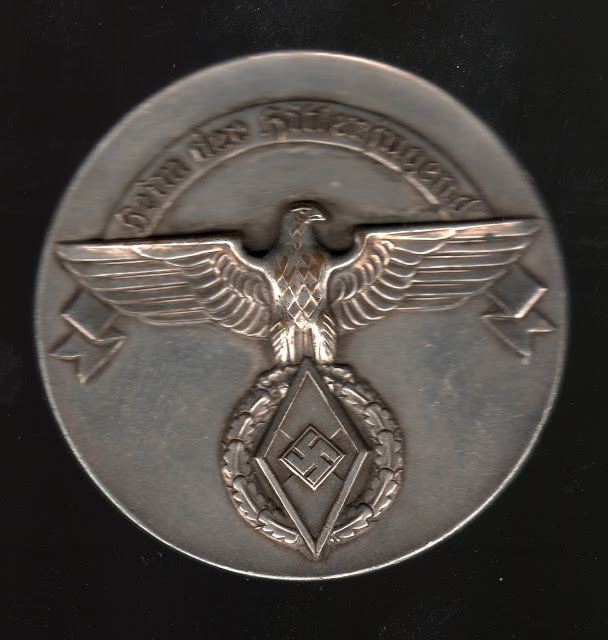 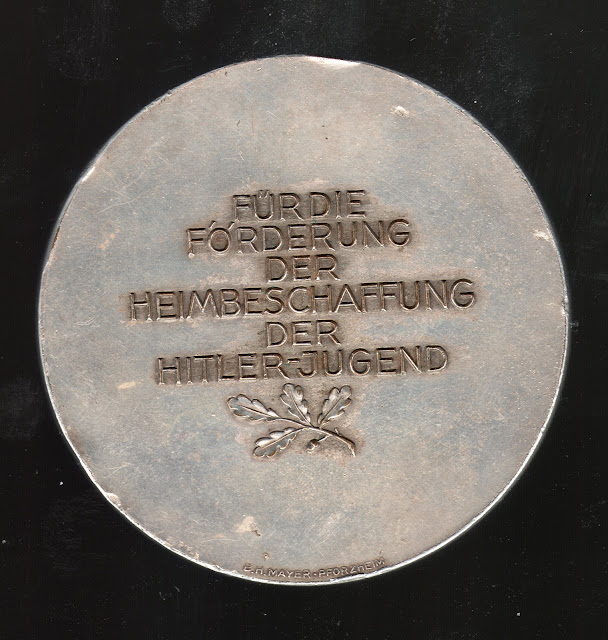 This medallion measures 70 mm across and has a field that is flat and slightly dished from the edge.  On to this is superimposed a very fine three-dimensional eagle that holds an oak leaf wreath of single leaves, six on either side, in its talons.  On to the wreath's field is superimposed the HJ membership diamond, its upper tip just touching the inner claw of the eagle's foot and the lower one just breaking the outer, lower line of the wreath.  There is a circular, scrolled banner that runs from beneath the eagle's wing and over its head to return beneath the other wing.  On to this, in raised Gothic script, is the inscription, 'HEIM DES HITLER JUGEND', which translates to, Home of the Hitler Youth.

The reverse has a flat field with the six-line inscription at the centre, in normal capital letters, 'FÜR DIE, FÖRDERUNG, DER, HEIMBESCHAFFUNG, DER, HITLER - JUGEND'.  Beneath this is a raised sprig of four oak leaves and one acorn.  The inscription translates to, For the Furthering or Sponsoring of the Hitler Youth Hostel Building Programme.  Round the bottom edge of the medallion, in small raised capital letters, is the manufacturer's name, 'G.H. Mayer. Pforzheim.'

The medallion is struck from tomback that is nickel-plated and then artificially patinated.  This plating could be of genuine silver.

The medallion was instituted in 1937 by Reichsjugendführer Balder von Schirach who had, from 1934 onwards, coined an annual slogan that was to indicate what aspect of HJ activity was to be stressed in the coming twelve months.  1937 was known as Jahr des Heimbeschaffung or the Year of Hostel Building and for those who had energetically assisted in this programme, this award was presented.  Whether the criteria was for the overseeing of construction of hostels, gathering donations of money to facilitate the building, the actual donation of property suitable for conversion or sites for hostels to be built on, is unknown.  It is also believed that the award was only issued for the period of the year of the programme.  The numbers awarded are unknown but believed to be very small.  The case is black simulated leather with black velvet base and white satin lid liner. The award is recessed in the base. The base has a cardboard stand on the reverse to allow it to be placed in a standing position. The citation for this medallion is unknown to the author.

Posted by Christopher Ailsby at 10:25