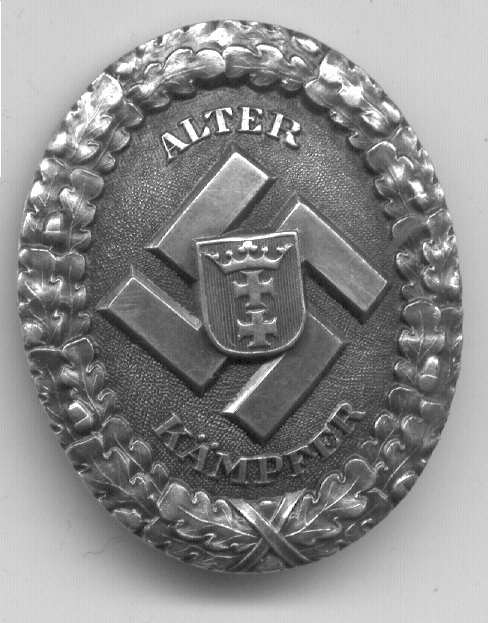 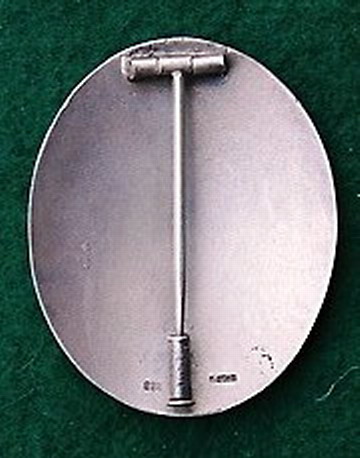 This award comprises of a silver, oval convex badge those measures 47 mm high and 38.5 m wide with an outer raised oak leaf wreath. The leaves are overlapping and punctuated with randomly placed acorns. The base has a crossed silk tie. The central field is finely pebbled onto this at the centre is a swastika. Superimposed on this is a shield that bears the armorial arms of a ducal coronet over two crosses. Above the swastika, in small raised capitals is, 'ALTE', and beneath, 'KÄMPFER', which translates to, 'Old Fighter'.

The reverse is plain and slightly concave. It has a hinge needle pin and bolt hook. To the left of this is the maker mark M.ST a S. to the right is the silver mark .925. 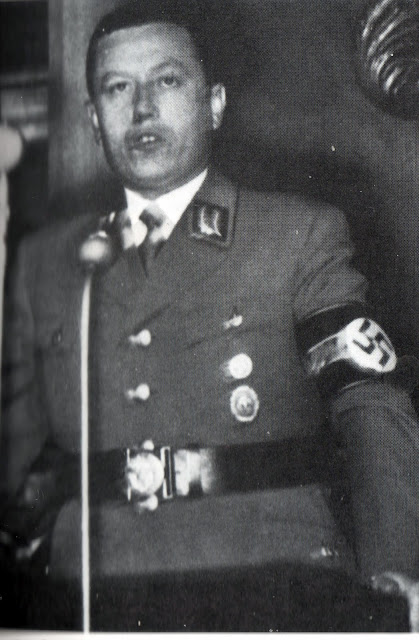 Gauleiter Forster wearing his Gau Danzig Badge during a speech in August 1939. An interesting observation seems to show it is the Danzig made piece. 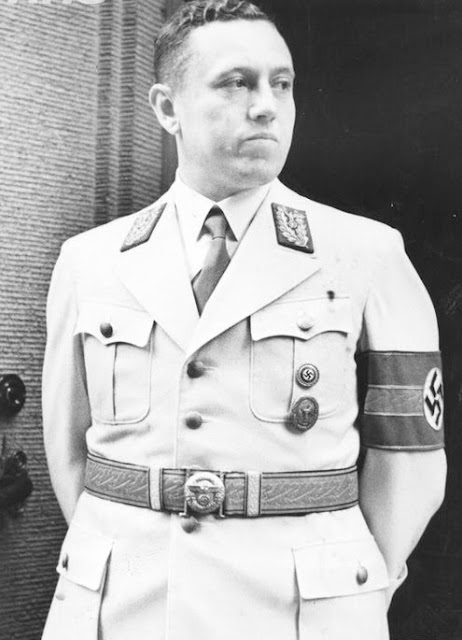 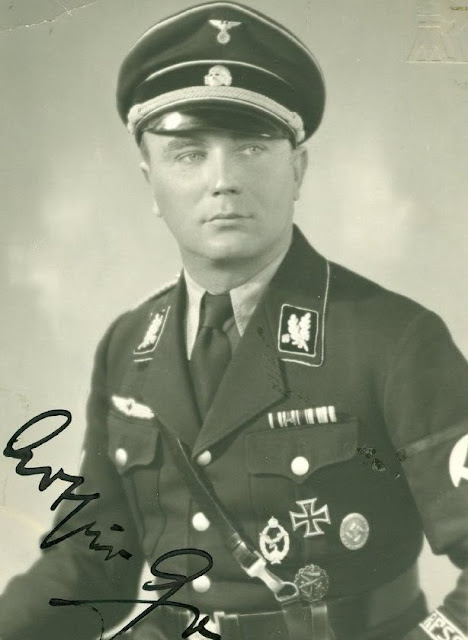 Greiser Arthur  - SS-Obergruppenführer wearing Gau Danzig Badge.﻿
It is interesting to note that a further award of this type of badge exists and is shown in Dr. Doehle’s book 'Die Auszeichen des Groβdeutschen Reichs', the fourth edition which was published in in 1943. 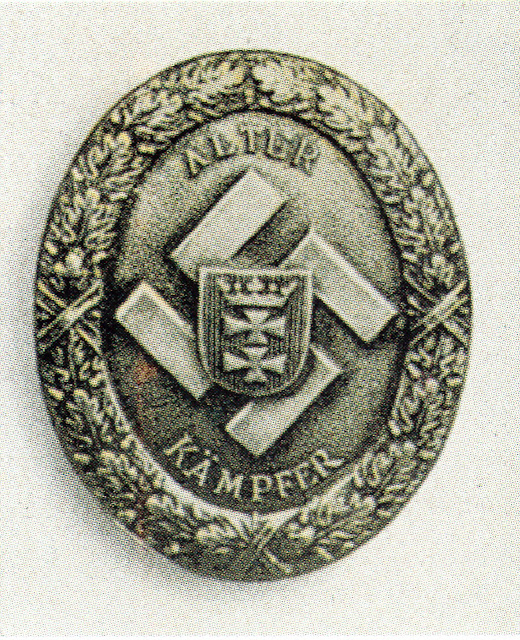 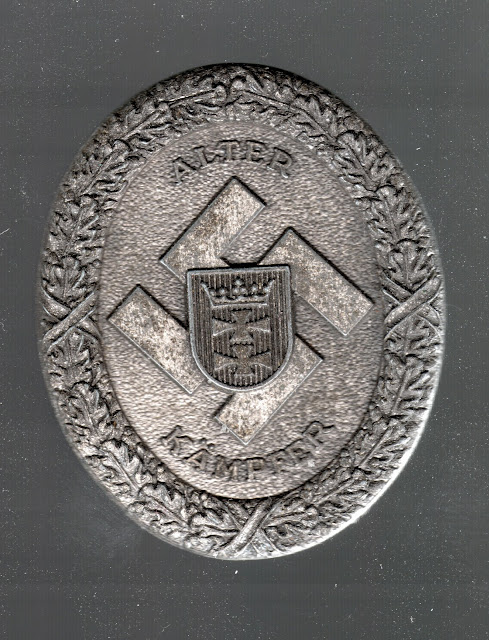 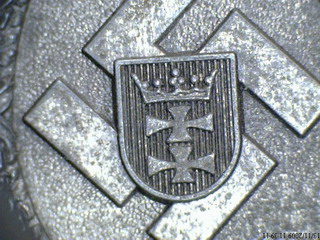 It comprises of a silver, oval badge that measures 44 mm high and 36 m wide which has a raised oak leaf wreath.  This has crossed ties at 9, 3 and 6 o'clock respectively and meets tip to tip at the apex.  There are nine bunches of three oak leaves on either side.  The recessed central field is finely pebbled and on to the centre is superimposed a raised swastika that measures 24 mm by 22 mm.  A shield with flat top and rounded base is superimposed on to this, which measures 11 mm by 10 mm.   It has a raised edge line and the field has 18 fine lines.  On to these is superimposed the armorial arms of , a ducal coronet over two crosses.  Above the swastika, in small raised capitals is, 'ALTE', and beneath, 'KÄMPFER''.

The reverse is plain with a vertical pin attached by an oblong plate. It is produced in fine Zink. 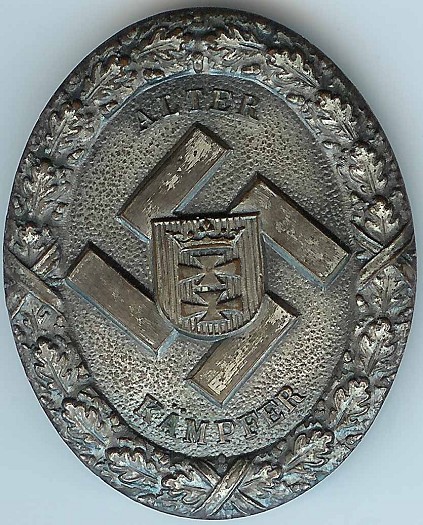 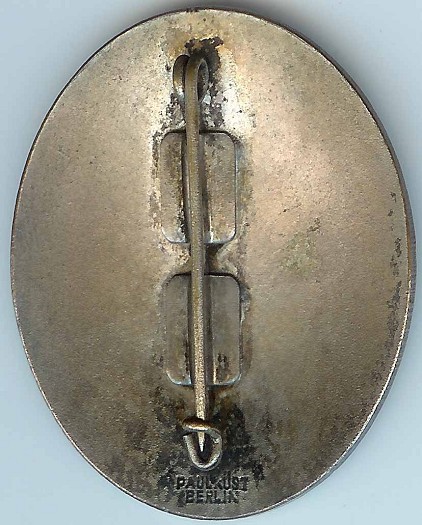 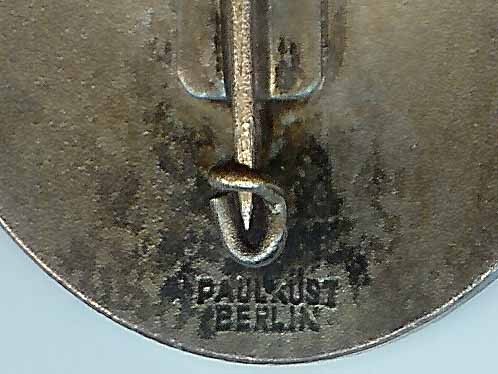 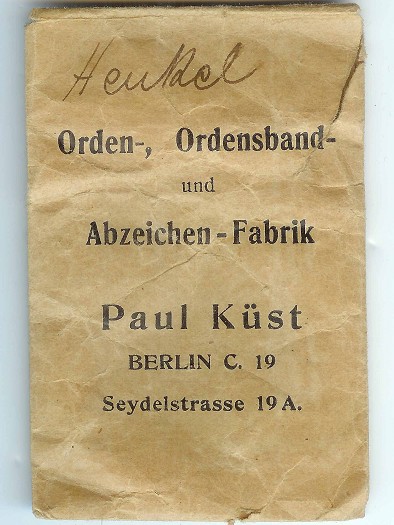 The badge is believed to have been instituted in May 1939 by Gauleiter Albert Forster but it could conceivably have been instituted on 26th October 1939 when two new Gaus were added to the Reich out of dismembered .  They were Gau Danzig - and Gau Posen which was to be renamed Gau Wartheland on 29th January 1940.

The city of Danzig and its surrounding territory, which amounted to some 729 square miles, had been placed under the tutelage of the League of Nations as a, 'Free City', by the Treaty of Versailles, thus removing it from the former Germany.  The German nationalists and pro-Nazi movement inside the territory gradually gained strength and, in June 1933 had a Nazi dominated government and this award was to reward those members of the Nazi Party who had helped form the Gau.  It is assumed that this badge was awarded to those members of the party who had been active before 1925. 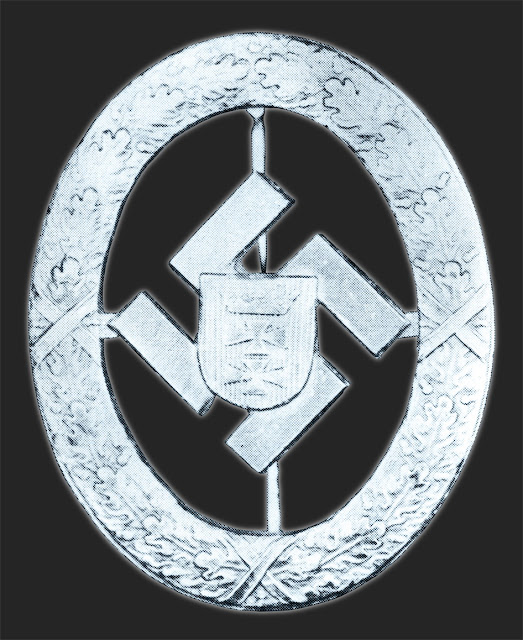 This badge comprises of a similar design to that described in Gau Danzig Commemorative Badge - Old Fighter but, in this case, the pebbled field and the inscription are cut out, leaving the arms of the swastika cut out also with the tips just attached to the wreath at 9 and 3 o'clock respectively.

The reverse has a needle pin and a hinge and hook at the top and bottom of the badge.

It is assumed that the badge was likewise instituted in May 1939 by the Gauleiter Albert Forster.  The purpose is again unknown but it can be concluded that this form of badge was most probably for those party members after the reforming of the Nazi party in 1925.  The organisations book of the NSDAP 1943 edition clearly shows the existence of two classes of the award. 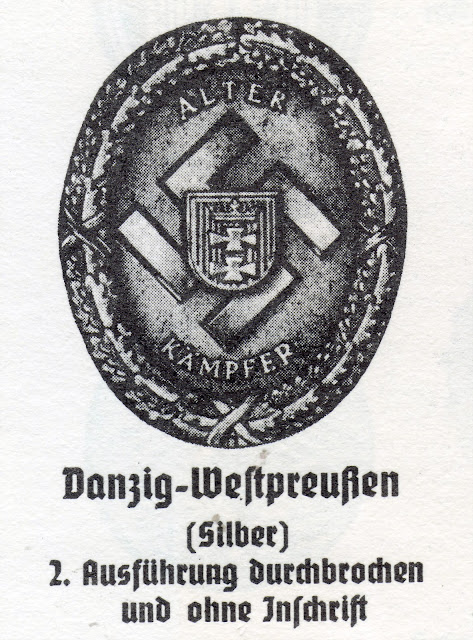 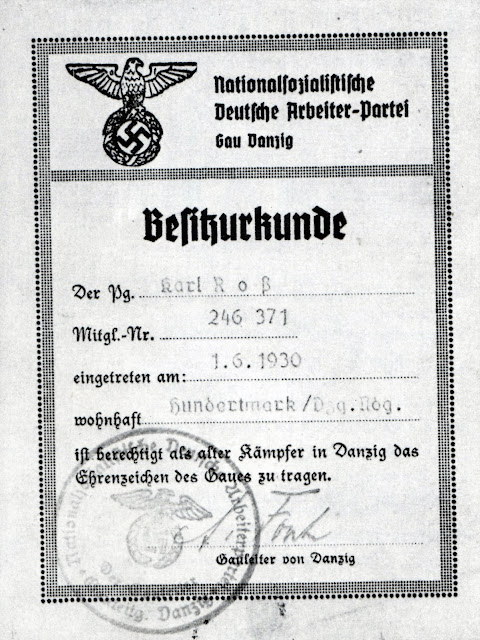 Fake Gau Danzig Commemorative Badge, note the poor casting on the obverse. This is most noticeably on the shield and crown emblem. The reverse is convincing, together with the pin construction. This can be currently purchased by jewellers, silversmiths and is currently shown in a trade magazine. 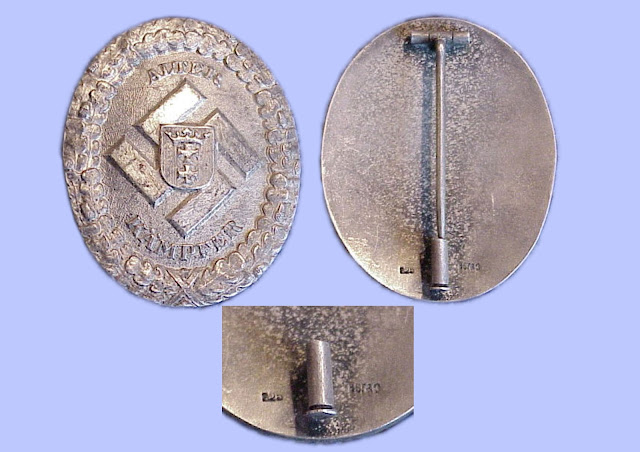 A comparison of a known original with the Copy. It is evident that the definition shows that the Copy has been taken from the original, but the cast is very poor. 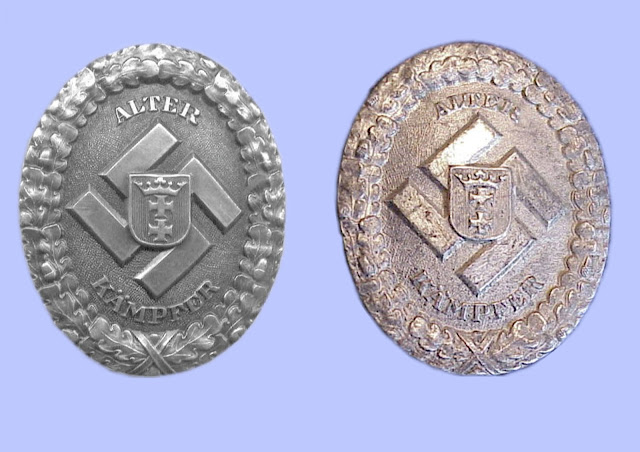 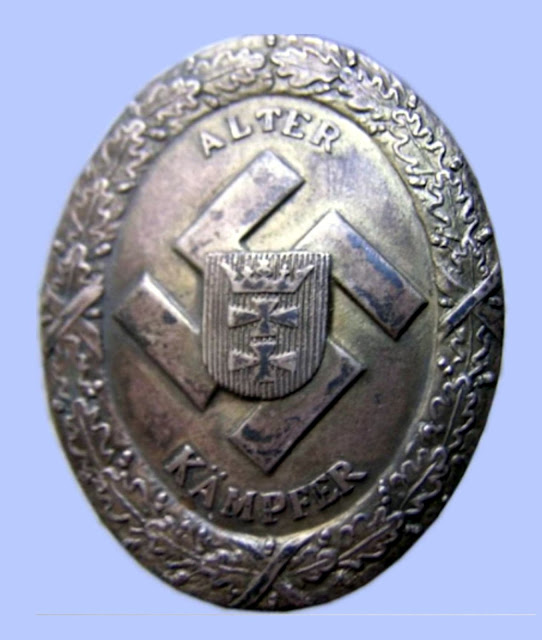 Another badge that takes the form of the zinc type. However the design is quite different in a number of subtle ways. 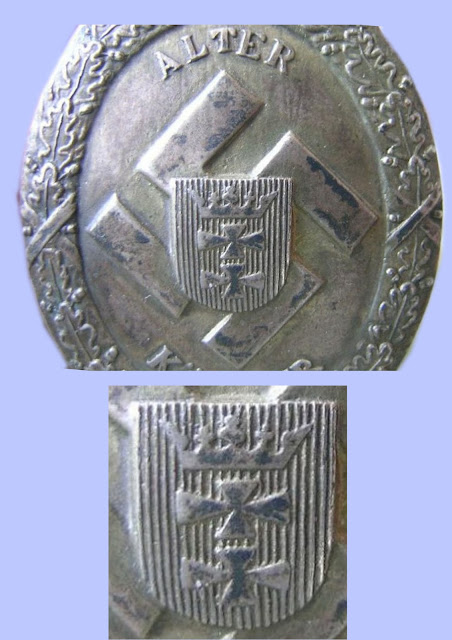 The shield gives the greatest illistration of the differences. 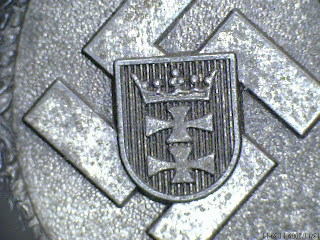 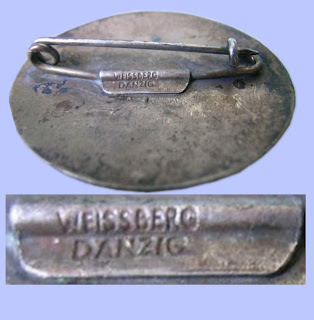 This is not a comparison between a fake and original, but rather an example of the engravers art in restoring a damaged piece. The shield clearly shows, on the left, how the damage has been restored. The upper arm of the swastika has been polished down as has the lower arm. The smoked grey artificial patination has been compromised. 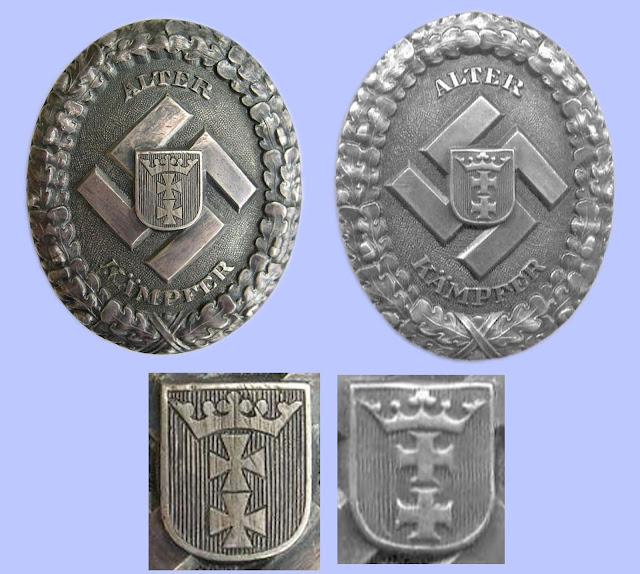 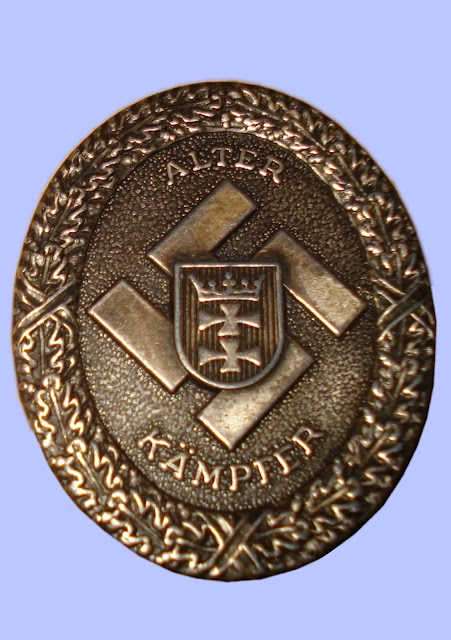 The shields are compared, that on the left the Fake and that on the right Original.﻿ The sharpness of the original is clearly visible. 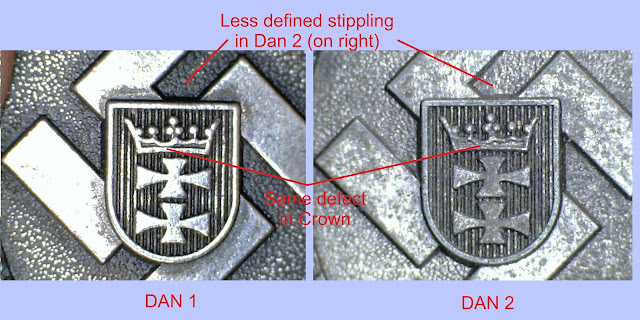 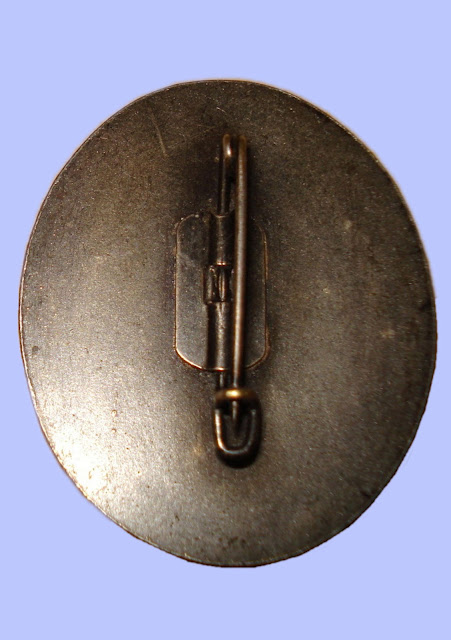 Posted by Christopher Ailsby at 04:24