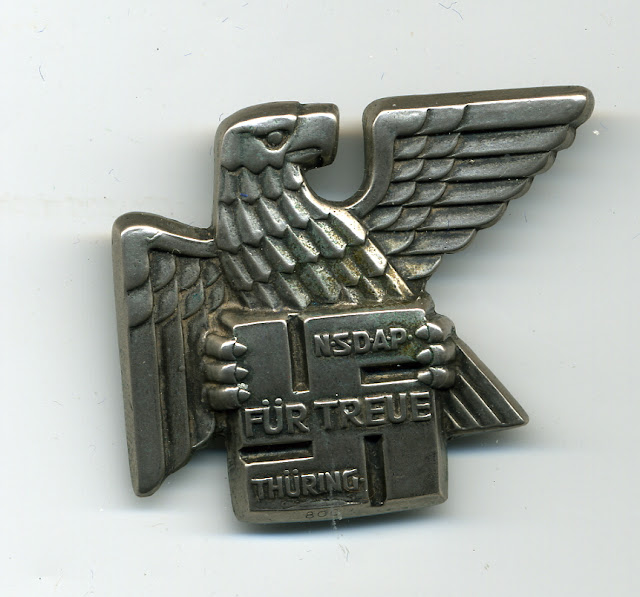 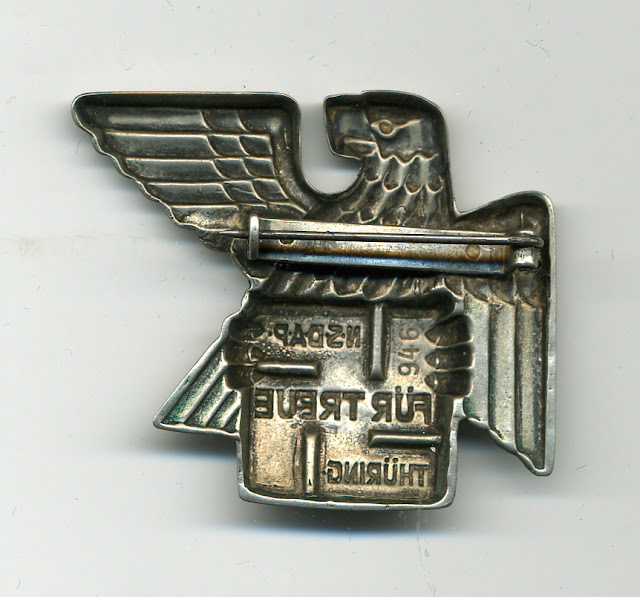 These three badges are of all the same design, that took its origin from the Gau Thüringen rally badge of 4th June 1933, that commemorated Gau Treffen, . 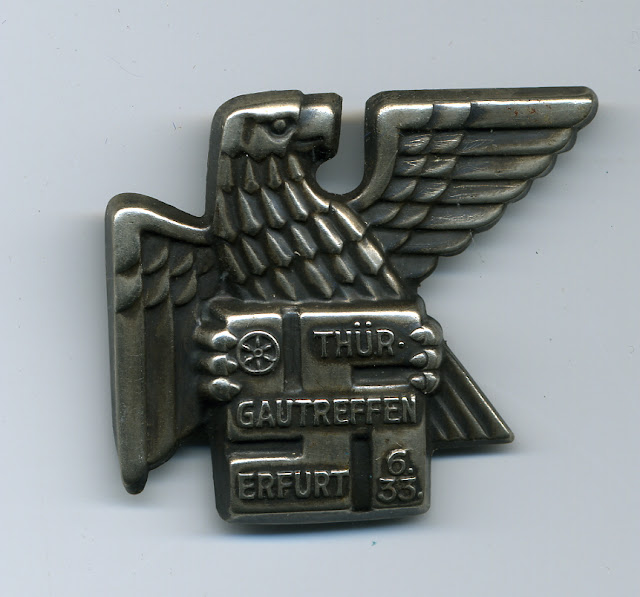 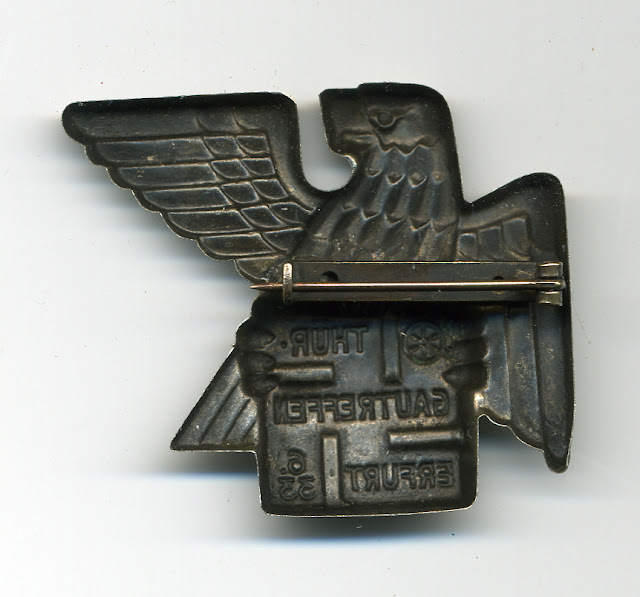 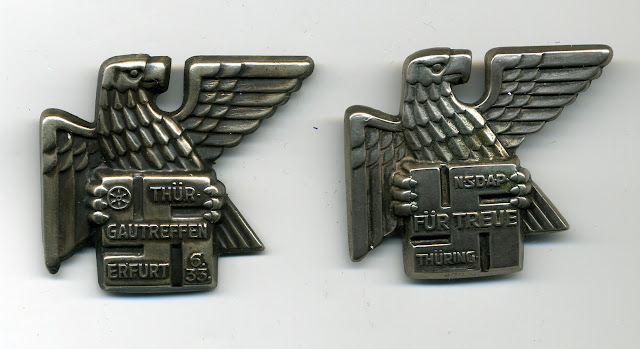 The badge comprises of a stylised eagle that looks to the viewer's right.  The wings are formed as in a corner of a square and the upper one has a large leading edge that runs from the eagle's body with a 'C' shape and has two small breaks on the first portion.  From the 'C' shape emanate a further six lines of fletch with two breaks that mirror the upper two.  The left wing points downwards and is of similar design, with three further lines of fletch.  The eagle's body curves to the viewer's right and has a distinctive head with pronounced eye and strong beak.  From this, five lines of fletch with four, five, six, six and three feathers.  Superimposed across the chest at this point is a large swastika that is held in the eagle's claws, as if held by fingers.  The upper arm has, in raised capital letters, 'N.S.D.A.P.' and across the centre, 'FÜR TREUE', and on the lower arm, 'THÜRING.'  This translates to, NSDAP For Loyalty Thüringia.

The reverse of the badge shows the negative of the obverse and has a horizontal pin that is the same as that employed to attach the ribbon of a medal on to a tunic.  This is soldered directly on to the body of the badge.  At the position of the stamping of the right claw, is the issue number of the badge.  This is found in impressed numerals.  The interesting thing about these, is that the numbers seem to have no significance to the grade of the badge, thus one encounters silver badges with numbers 402, 909 and 946, and bronze badges with numbers 826 and 982.  The pin is normally found in a round needle pin form but it can also be found with a flat broad blade pin. 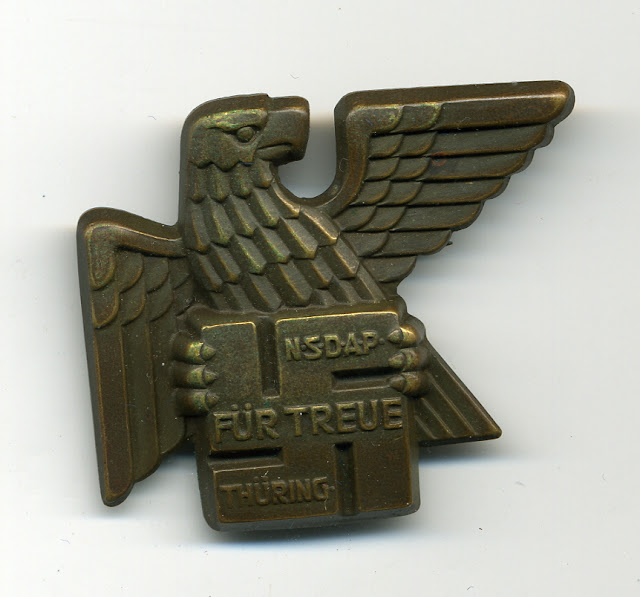 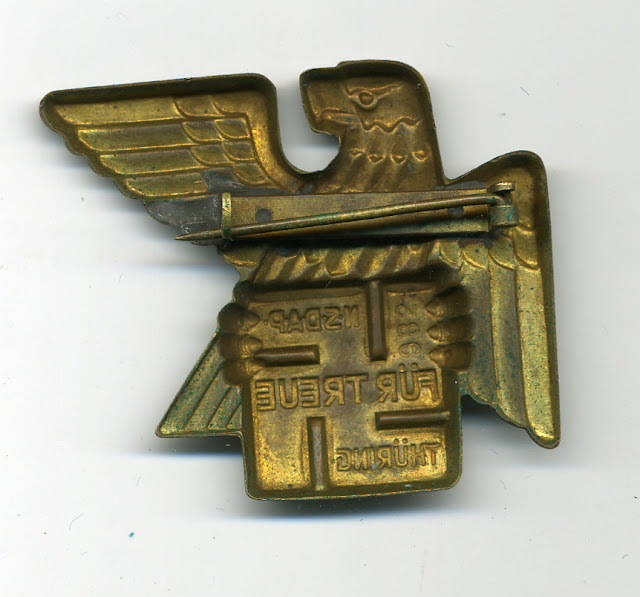 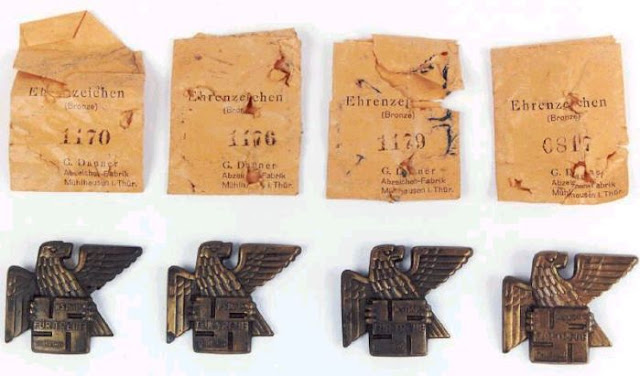 The badges are formed in pressed brass, which is then artificially patinated a chocolate brown.  The reverse of these badges shows a light, nearly gold appearance and the obverse has this light colour showing through the darker colour on the leading edges of the badge.  The same brass badge is used for the gold class.  It is then gilded and then similarly treated to form the patinated effect.  The silver badge is produced in solid silver that is stamped at the bottom of the badge with a small .800 silver grade.  Some badges have been encountered that are the bronze badge which has a light silver wash applied and this seems to bubble with age.  Whether these are genuine silver badges is unknown to this author or if they are bronze badges silver dipped.

These badges were introduced on 17th June 1933 by Gauleiter Fritz Sauckel as an award to the thousand most senior fellow fighters of Gau Thüringia.  It was to be worn on the left breast of the party uniform.  A miniature was produced for wear on the civilian dress.  This has been encountered in a large size and a small 9 mm size.  Restrictions were levelled on the wearing of Gau badges generally in that only one could be worn at any given time if the recipient held two, a second from another Gau, and none was supposed to be worn when the Golden Party Badge was worn.

The badge was accompanied by an award document that was oblong with an ornate, three line indented border which had, at the centre of the document, a faint swastika with the fields of the arms filled with lines.  The printing was in Gothic script as follows,
'BESITZ ZEUGNIS, FÜR TREUE UND IN ANERKENNUNG DER VERDIENSTE IN KAMPF, DAS DRITTE WURDE HEUTE DEM,' beneath is Pg with a line of dots on to which was hand written the recipient's name and address,
with Nr. and a short line of dots beside this, on to which the party number is handwritten.  Beneath is, 'DAS SILBERNE EHRENZEICHEN NR', followed by the badge's issue number, 'DER TAUSEND ÄLTESTEN MITKÄMPFER, DES GAUES THÜRINGEN DER NSDAP. VERLIEHEN. - .DIESES BESITZ, ZEUGNIS BERECHTIGT ZUM ÖFFENTLICHEN TRAGEN DES EHRENZEICHENS.'  Beneath and in the left-hand lower corner is, ', den 17. Juni 1933'.  Across the border and to the right of the lower arm of the swastika is the Gau stamp.  Next to this is Gauleiter and above this is the Gauleiter's signature. 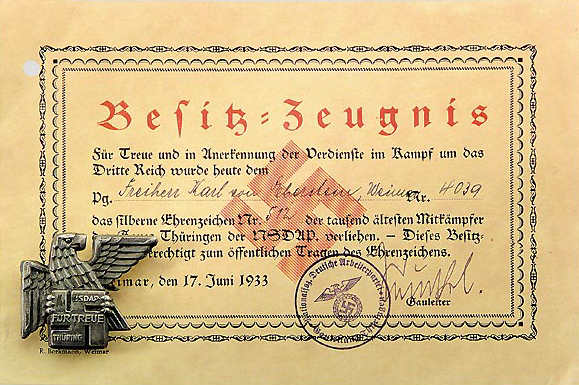 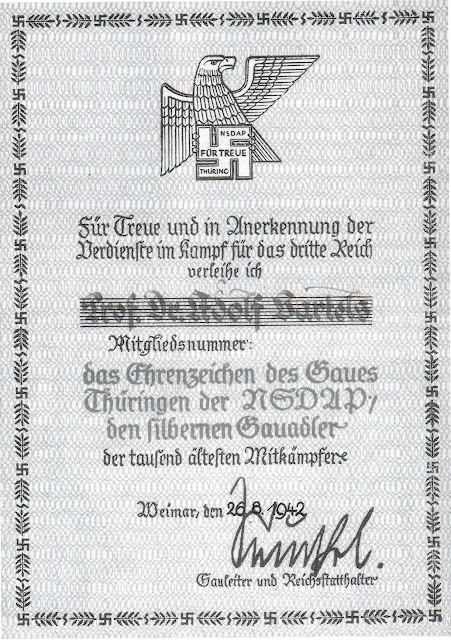 The badge was awarded in a hard hinged case that had a dark red, pebbled leather finish with no inscription or emblem on the lid.  The upper interior of the lid was lined in medium blue satin and the lower section was in dark blue velvet. 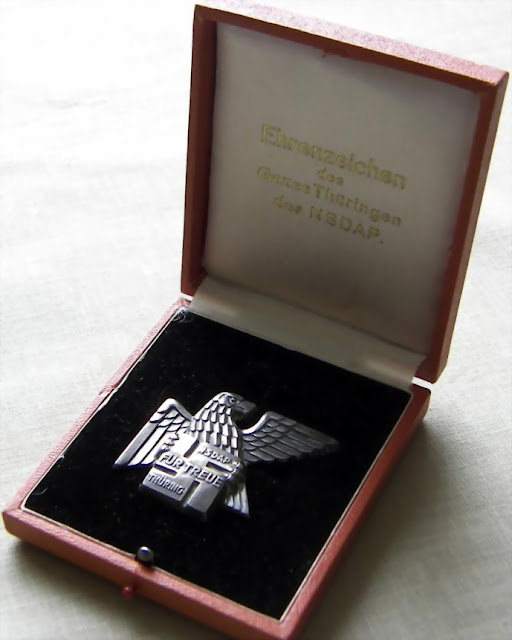 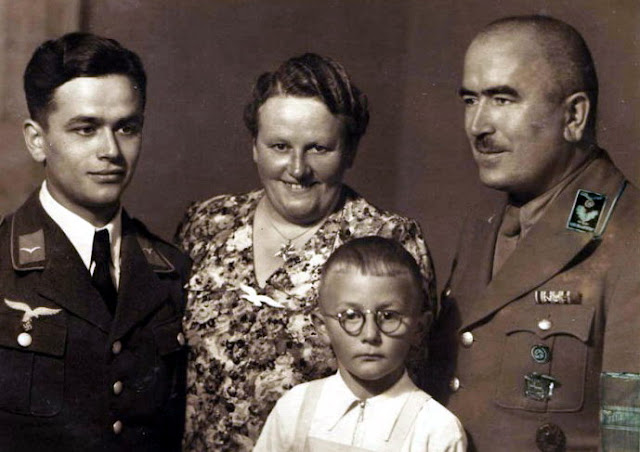 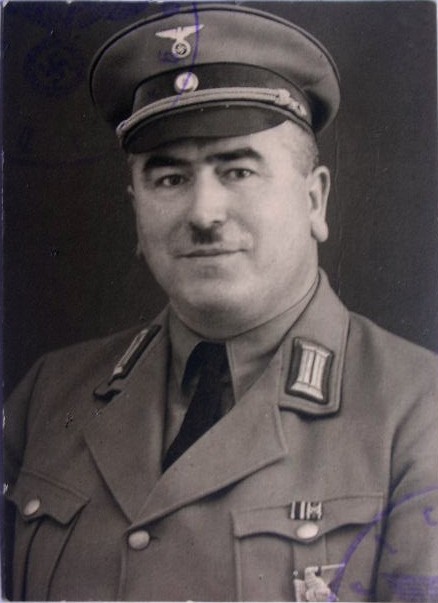 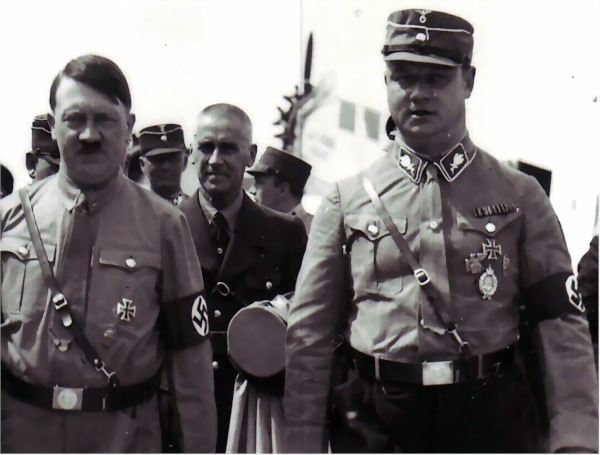 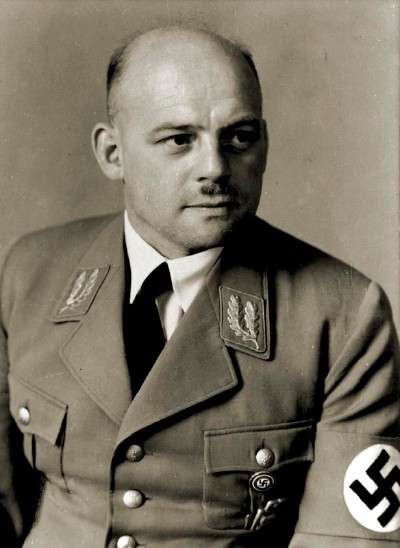 Born in Haβfurt , the only child of a postman and a seamstress. Educated at local schools only to leave early when his mother became ill. At the age of fifteen he joined the Norwegian merchant navy sailing on a three-masted schooner, and later on Swedish and German vessels. His naval career led him to sail throughout the world, rising to the rank of Vollmatrose.

At the outbreak of the First World War, en route to aboard a German vessel, the ship was captured and he was subsequently interned in from August 1914 until November 1919. Returning to , he found factory work in and from 1922 to 1923 studied engineering in Ilmenau. In 1923 he joined the National Socialist German Workers Party, NSDAP. The following year he married Elisabeth Wetzel, and subsequently had ten children. He remained a party member during its time of dissolution, publicly rejoined in 1925. He was appointed in 1927 Gauleiter of Thüringia and in 1929 a member of the regional government. With Hitler’s coming to power in 1933 he was promoted to Reich Regent of Thüringia and Reichstag member. He was bestowed in 1934 with the honoree rank in both the SS and SA of Obergruppenführer. During the Second Word War, he was Reich Defence Commissioner for the district (Reichsverteidigungskommissar Wehrkreis IX). On 21 March 1942, at the recommendation of Martin Bormann, he was appointed General Plenipotentiary for Labour Deployment (Generalbevollmächtigter für den Arbeitseinsatz). He worked directly under Hitler through the Four-Year Plan Office, controlling and directing German labour. In response to ever increasing demands, he met the requirement for man power with people from the occupied territories.

Voluntary numbers were insufficient and within a few months forced recruitment was introduced. Of the 5 million foreign workers brought to , approximately 200,000 came voluntarily. However the largest number came from the Eastern territories, where the methods used to gain workers was extremely harsh.

After the war he was arraigned at the Nuremberg War Crimes Tribunal accused of conspiracy to commit crimes against peace; planning, initiating and waging wars of aggression; war crimes and crimes against humanity. He defended the Arbeitseinsatz as "nothing to do with exploitation. It is an economic process for supplying labour". He denied that it was slave labour or that it was common to deliberately work people to death (extermination by labour) or to mistreat them. After a defense led by Robert Servatius, Sauckel was found guilty of war crimes and crimes against humanity, and was hanged on 16th October 1946. His last words were recorded as "Ich sterbe unschuldig, mein Urteil ist ungerecht. Gott beschütze Deutschland!" (I die an innocent man, my sentence is unjust. God protect !). 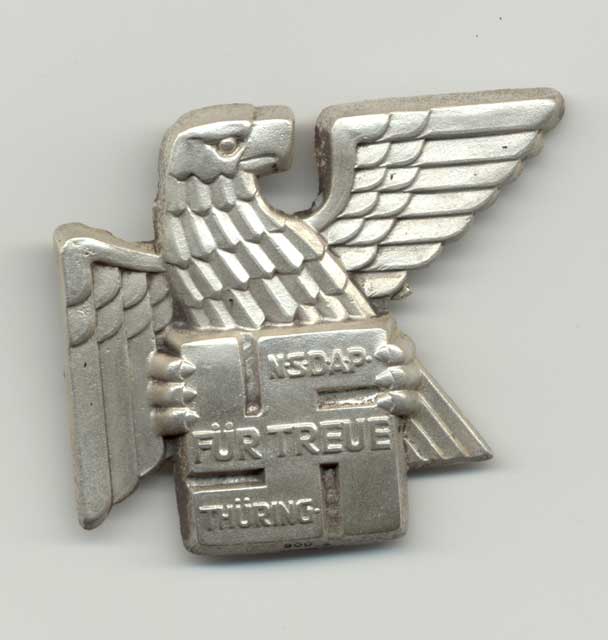