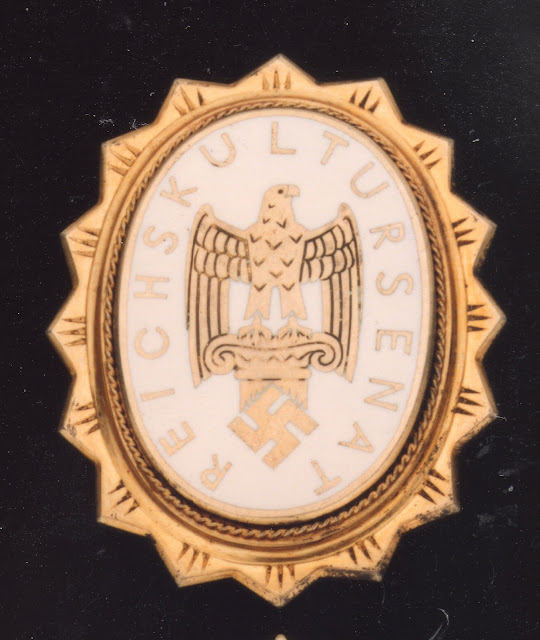 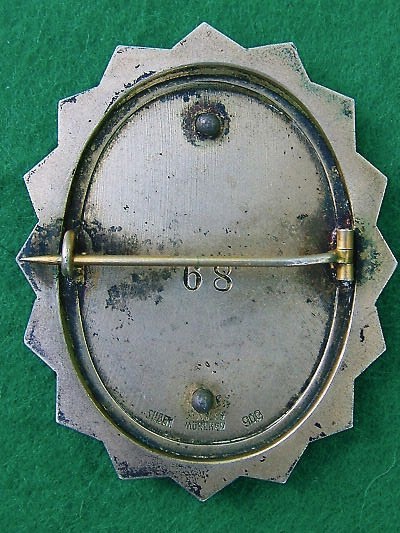 The field of the first type has two ball rivets at the top and bottom. 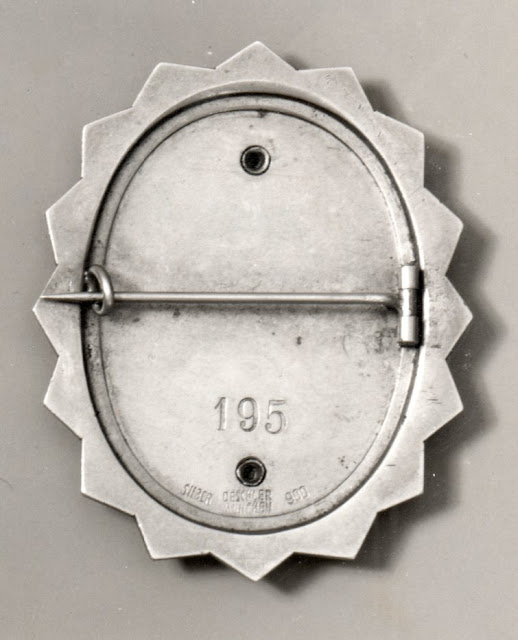 The second type, the field has two open rivets at the top and bottom.

This award consists of an oval that measures 56 mm by 44 mm wide with sixteen small points round its edge.  Each of these has three small lines.  Indented by 4 mm is a raised oval line that is surmounted by a separate plate, which has a twisted wire outer line.  The central field has an eagle with down swept wings.  The upper and lower line of fletch have five individual feathers on each wing.  The down swept parts have four segments, while the inner edges of wings and legs are separate, as is the gap between the legs.  The eagle surmounts an ionic column that, in turn, sits on a swastika.  Round the field in capital letters is, 'REICHS KULTURSENAT.'  The field is in filled with cream coloured opaque enamel and the metal parts of the badge are gilded.  The markings on the eagle and column are outlined in dark oxidisation and the other metal parts are lightly toned.

The reverse of the badge is plain and shows a recessed oval.  This has a raised outer edge line and the field has two ball rivets at the top and bottom.  Above the lower rivet is impressed the issue number of the badge and below in small incused capital letters, 'GES. GESCH. SILBER. DESCHLER MÜNCHEN 900.'  There is a horizontal barrel hinge, needle pin and 'C' form hook.  The second form, the field has two open rivets at the top and bottom. This is associated with the badges conferred on the members after the initial presentation of the 125 members of the Senate. The badge was designed by Professor Richard Klein of München and worn on the left breast of the uniform.  It was also permitted to wear the badge on civilian clothes. 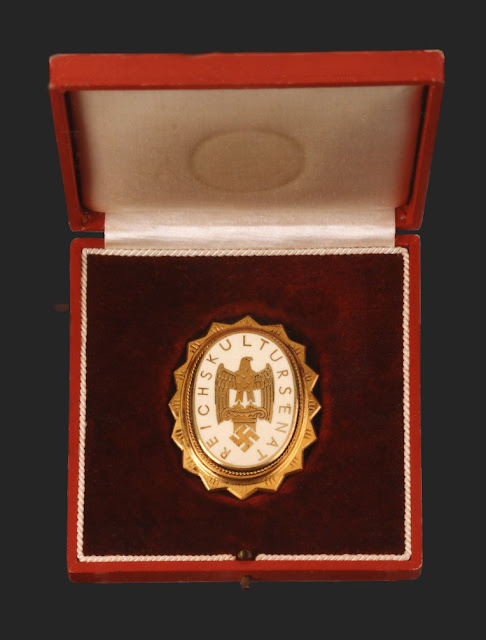 The badge was introduced on 28th November 1936 by the governing body of the National Senate of Culture to be awarded to its entire membership to recognise the member’s contribution to the cultural heritage of national socialist and it was on this occasion that the 125 members of the Senate were invested with the award. It is doubtful that the membership of the Senate underwent very many changes, which would have limited the demand for badges and gave rise to probably less than 300 being awarded.  This assumption is purely speculative and for the reader to gauge the comparative rarity of the award.  The citation that accompanied the award is unknown to the author.  The badge was awarded in a hard hinged case with a press-stud catch.  The exterior of the case is red, the inside of the lid is lined with white satin while the lower section is black velvet and recessed to accept the badge, with the outer edge finished with white, twisted satin cord.  There is no upper or inner lid inscription or provision for the inclusion of the miniature badge.  The award came with a small card that was carried at all times giving proof of entitlement to wear the badge.

The tightening of control on the arts began on 22nd September 1933 with a law that established a National Chamber of Culture, or Reichskulturkammer, which was a nationwide organisation embracing all those whose professional remuneration came from art, music, the theatre, press, radio, literature or the cinema.  Its purpose was to act as a coordinating point for the various cultural and culturally related arts, with the ultimate control of the chamber vesting in the minister of propaganda, Dr. Joseph Göbbels but this power was delegated nominally to the National Senate of Culture, which was established on 15th November 1935.  Göbbels had long controlled the communications media and the establishment of the chamber offered him the opportunity to extend his control still further and utilise those various art forms to convey his propaganda themes to a wider audience.  The RKK's purpose was to be the national organization for the monitoring and control of German culture. It "approved" art and artists, and excluded the decadent, Jewish, etc, making it impossible for them to work or display their art. It was intimately involved in both the 1936 "Degenerate Art" exhibition and the 1937 Haus of German Art.

Formed on 22nd September 1933 by "Reichsminister für Volksaufklärung und Propaganda" Joseph Goebbels, the Reichskulturkammer eventually consisted of 7 other specialist bodies:
Reichsschrifttumskammer – forwriters - (President: Hans Friedrich Blunck, later: Hanns Johst).
Reichsfilmkammer - for film - (Presidents: Fritz Scheuermann, Oswald Lehnich, Carl Froelich).
Reichsmusikkammer- for music - (President from 1935: composer Richard Strauss, later: Peter Raabe).
Reichstheaterkammer - for theatre - (President from 1935: Otto Laubinger, later: Rainer Schlösser).
Reichspressekammer - for journalists & the press - (President: Max Amann)
Reichsrundfunkkammer - for radio - (President: Horst Dreßler-Andreß; discontinued as a separate Chamber in 1939).
Reichskammer der bildenden Künste - for painting, sculpture etc (President: Adolf Ziegler). The chamber was composed of individuals connected with the various arts or those who had assisted in the advancement of German culture and it was from these members that the Senate was formed. The RKK continued until 1945, with a succession of Vice Presidents, including Walther Funk, Leopold Gutterer, Karl Hanke and Werner Naumann. 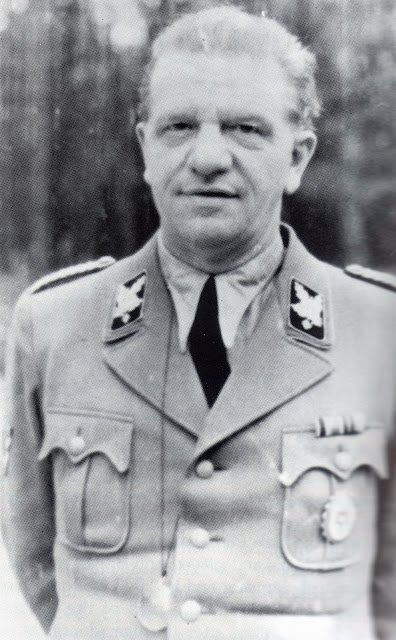 Johst was born in Seerhausen bei , . He was A dramatist and author, writing a series of expressionist dramas such as The Young Man (1916) and The King (1920). He enthusiastically supported the Nazi cause and as a producer of the Prussian State Theatre in 1933, he called for “a reawakening of confidence” in the Nazi movement. Johst wrote a play about a Nazi martyr, Albert Leo Schlageter. Hitler was delighted with this work. In the same year Johst, who abhorred the thought of “culture,” was appointed president of the Academy for German Poetry. In 1934 he was named to the Prussian State Council and in 1935 became President of the Reich Theatre Chamber. With Goebbels, Johst strove to “save the German people from the complete materialism of a purely realistic world.”

A de-Nazification court on 7 July 1949 found him compliant in being a “fellow traveller” and was fined 500 Marks. He appealed the decision and war handed down a much harsher sentence that comprised, three and a half years in a labour camp and confiscation of half his property. Johst died in Ruhpolding 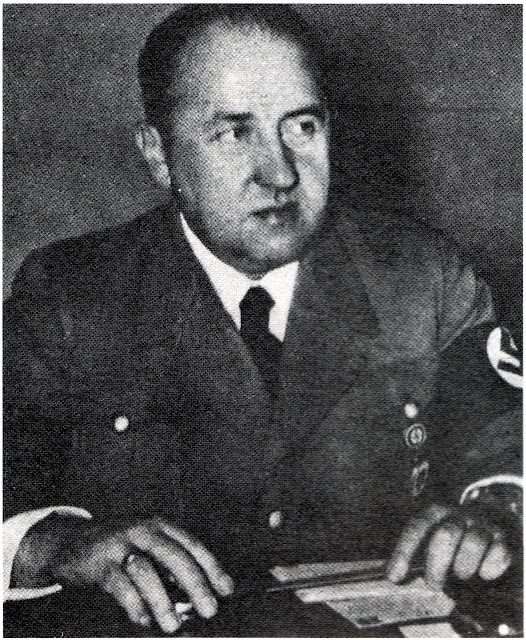 Walter Funk, Reichbank President, wears the Honour Badge for Members of the National Senate of Culture below the Golden Party Badge.


Members of the National Senate of Culture.

Posted by Christopher Ailsby at 10:37