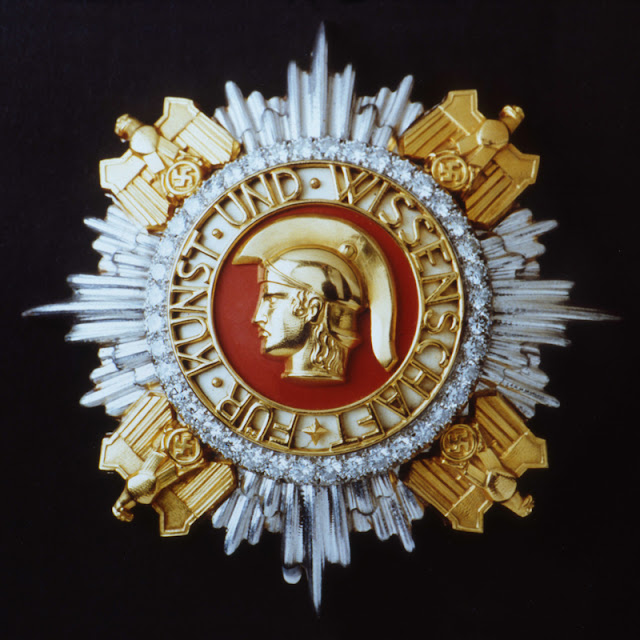 This award consists of an irregular star that measures 96 mm across.  It has a larger point at 6, 9, 12 and 3 o'clock with smaller ones in the quarters.  In the quarters, superimposed over the rays, are eagles with wingspans that measure 22 mm.  There is an inner band of 40 quarter carat diamonds that are set with claws so that there is a continuous run of diamonds.  Inside this is an 8 mm ring that has, in pierced work which is preceded by a star, the legend in capital letters, 'FÜR . KUNST . UND . WISSENSCHAFT'.  This is positioned over a polished silver underlay.  The centre has an orange-red enamelled plaque on to which is superimposed the two-dimensional head of Athena.  The body of the badge is silver coloured and supposedly produced in platinum while the eagle's legend and Athena’s head are finished in gold.

The reverse is plain with a massive pin, hinge and hook construction.  Albert Speer stated in his book, 'Inside the Third Reich', "The decoration for which I had expressed my preference was the National Prize.  It was thickly encrusted with diamonds and so heavy that the wearer had to have a pendant inside his dinner jacket to carry the weight".  The star was designed by Müller - Erfurt of Berlin.

The award was instituted on 30th January 1937 by Adolf Hitler who intended it to replace the Nobel Peace Prize.  Hitler had taken as a personal insult and subsequently used as a pretext forbidding further acceptance of a Nobel Prize by a German citizen, the award of the Nobel Peace Prize for 1935 to Carl von Ossietzky the German pacifist writer upon whom it was bestowed on 10th September 1936 and who was, at that time, languishing in a concentration camp.

There was also a need to replace the, 'Der Königlich Preuβische und Deutsche Orden Pour le Merite für Wissenschaft und Künste'.  This order, although in existence until 1945, was closed for purposes of award from 1933, thus leaving a gap in awards for the academic field.

The first awards were made on 7th September 1937 during the rally at Nürnberg where the awards were made with great ceremony.  A symbolic posthumous award was bestowed upon Hitler's personal architect, Professor Paul Ludwig Troost, who had died in 1934.  This was then followed by the investiture of the living recipients;
Reichsleiter Alfred Rosenberg, for his contribution to the Nazi movement.  He was the philosopher of the party and author of the book, 'Myth of the Twentieth Century'.
Professor August Bier and Dr. Ferdinand Sauerbruch, who jointly shared the prize for medicine and were both distinguished medical researchers.
Dr. Wilhelm Filchner who was recognised for his explorations of Antarctica and . 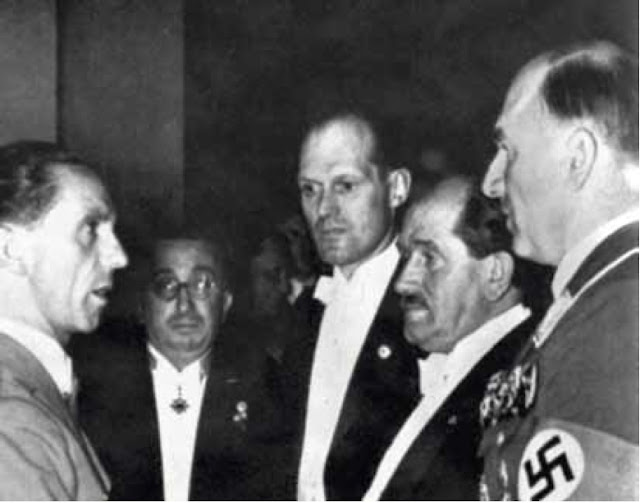 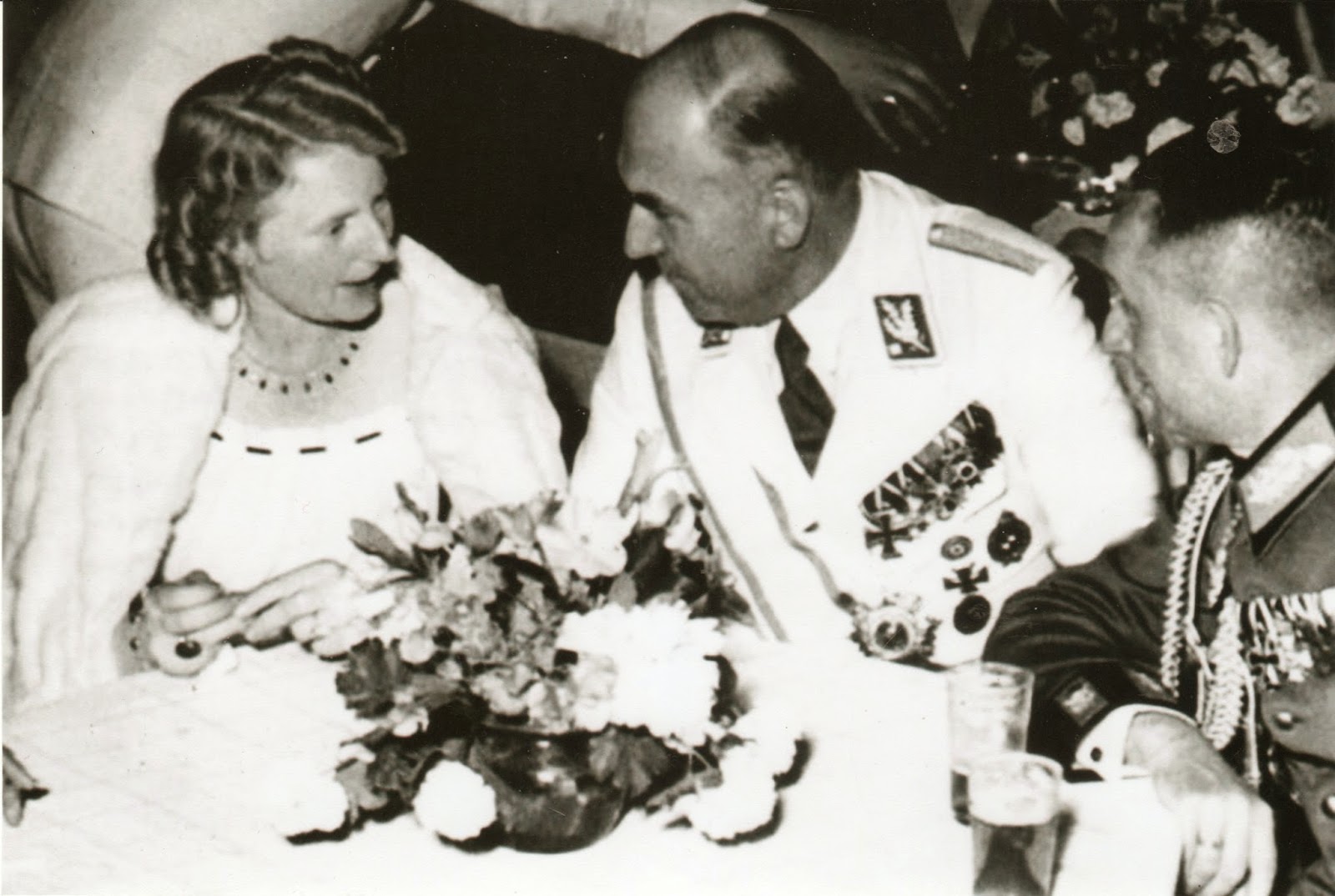 Dr. Todt wearing the Order.
The award was accompanied by a cash prize worth 100,000 RM which, in the case of joint awards, resulted in the prize being shared equally.  It was also accompanied by elaborate document cover that was similar to that which was to be used for the Knights Cross of the Iron Cross.  It was constructed of reddish-brown leather that had a gold tooled border of interlocking swastikas, with a gold embossed eagle and swastika at the centre.  Inside was the document with an open winged eagle at the top, clutching an oak leaf wreath within which is a swastika.  Beneath this in capital letters, 'ICH VERLEIHE HIERMIT,' followed by the recipient's name that had been hand illuminated, 'DEN DEUTSCHEN NATIONALPREIS, FÜR KUNST UND WISSENSCHAFT, NÜRNBERG DEN,' and the date of award.  Beneath is the signature of Adolf Hitler and Dr. Goebbels.  The folder was designed by Frieda Thiersch and was incorporated into an unusual casket that held the award and the sash.  The top of the casket has four gilt metal set squares at the corners, on to which is superimposed a closed winged eagle employed to hold the folder to the top of the casket.  The outer edge is finished in the same coloured leather and the inner and outer edges of the leather are finished with a gold tooled line.  At the top of the front edge there is a clasp holding the top of the casket to the body by means of two round teeth.  This opens and is held by a pair of stays at the hinge.  Inside is a panel that holds the star.  This is removable and beneath is housed the sash of the order.  It is unknown if the 1938 awards were presented in such a manner.  The badge was, at this period, contained in a pouch that folded over.  This is made of soft, red leather with a purple velvet liner with the cartouche of the maker stencilled on one of the flaps.  It is held closed by a press-stud popper. 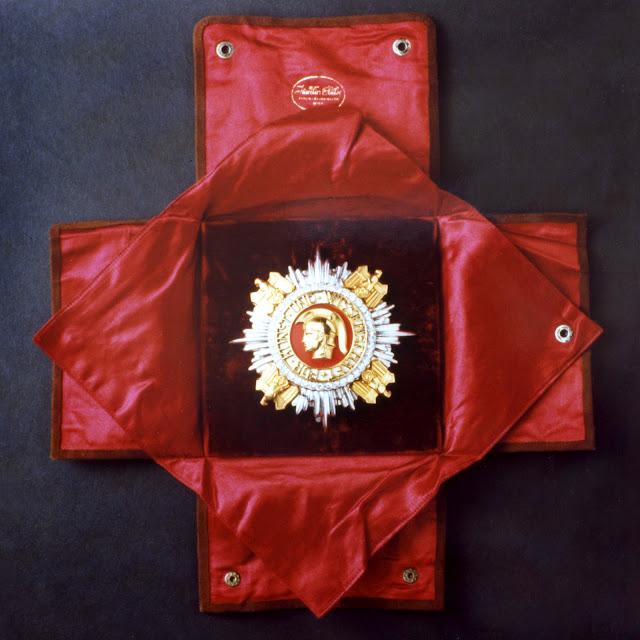 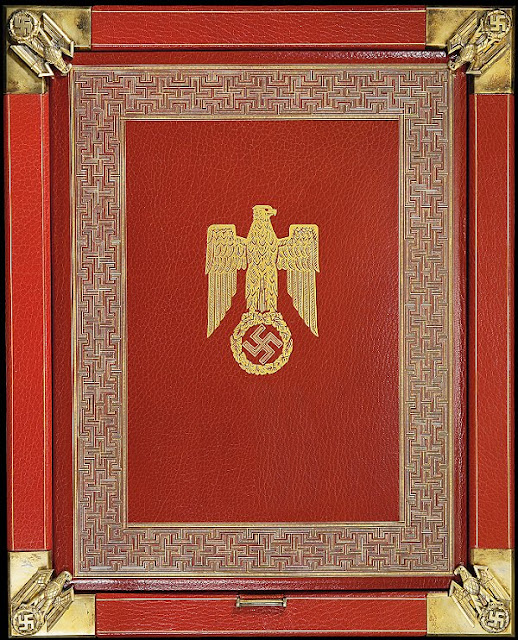 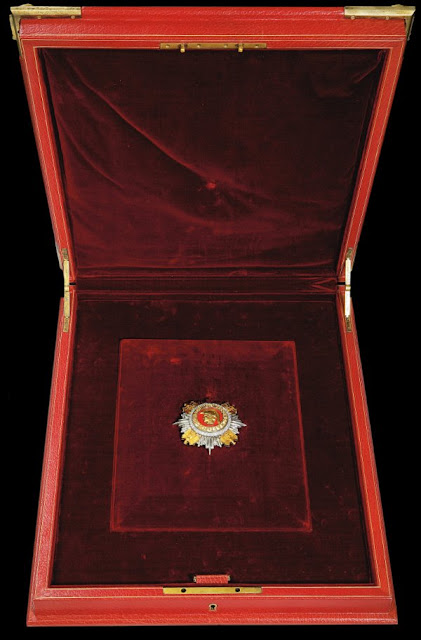 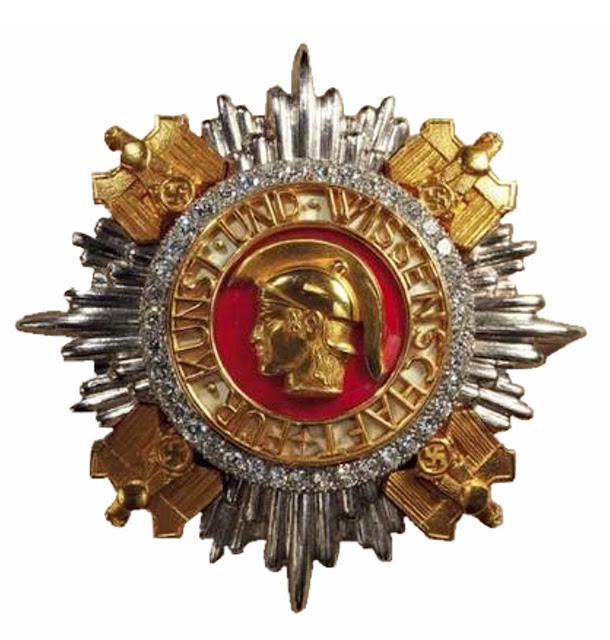 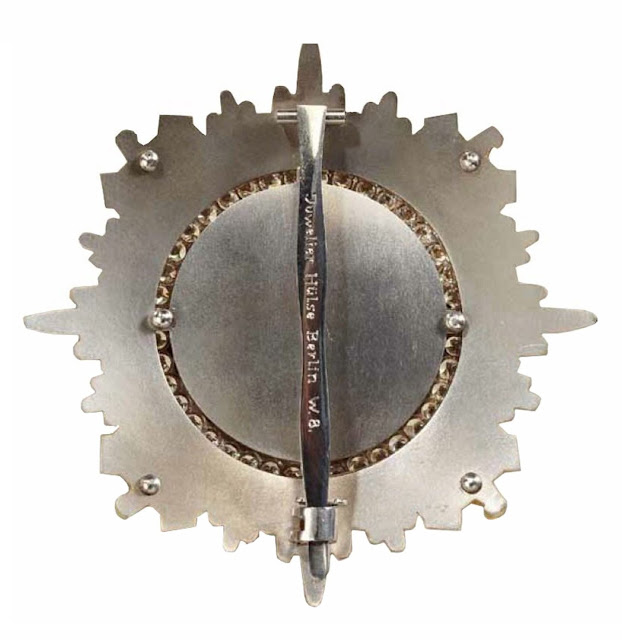 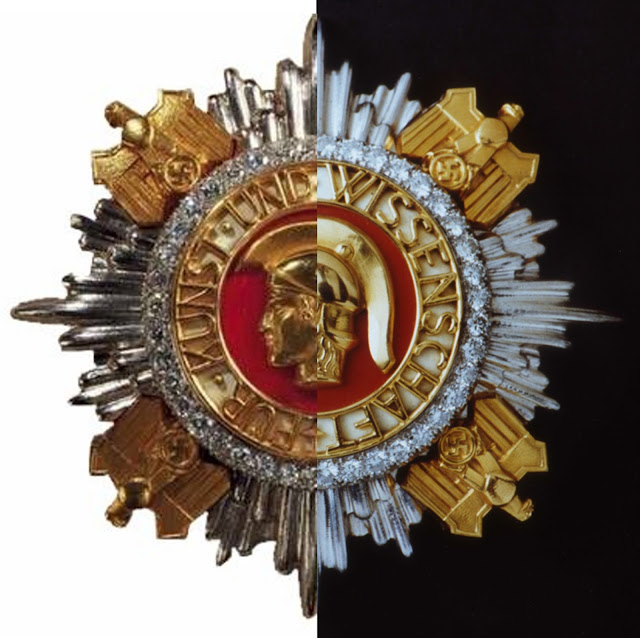 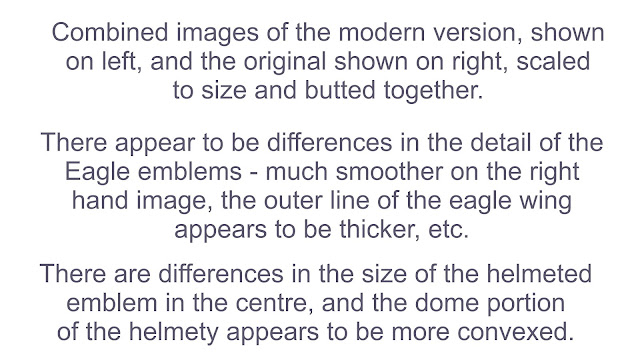 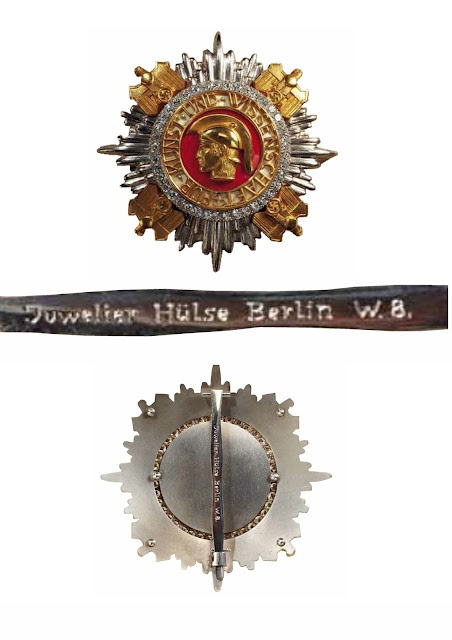 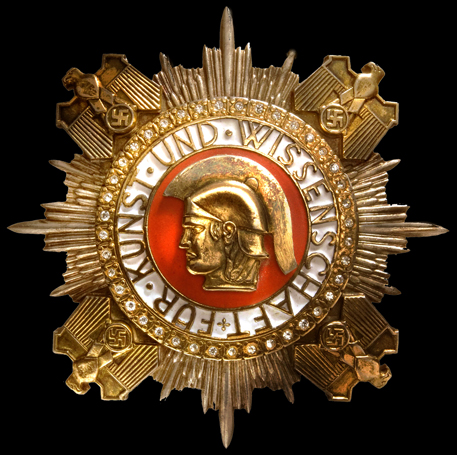 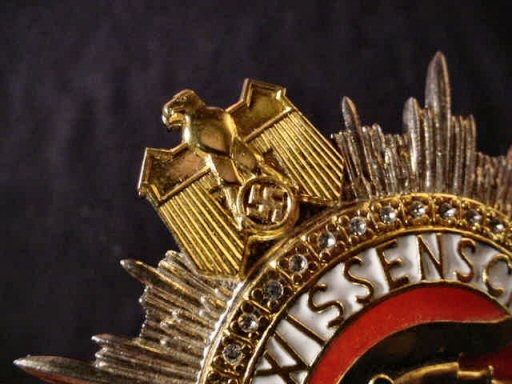 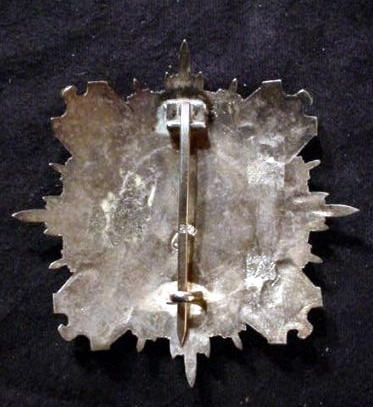 Posted by Christopher Ailsby at 09:36