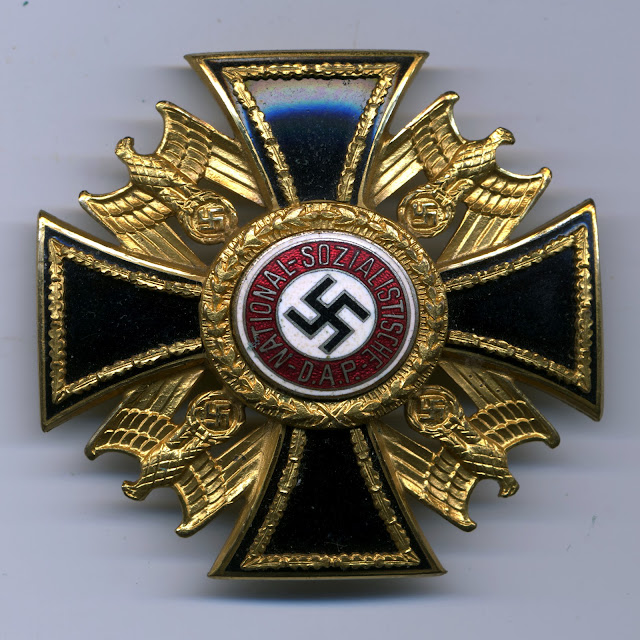 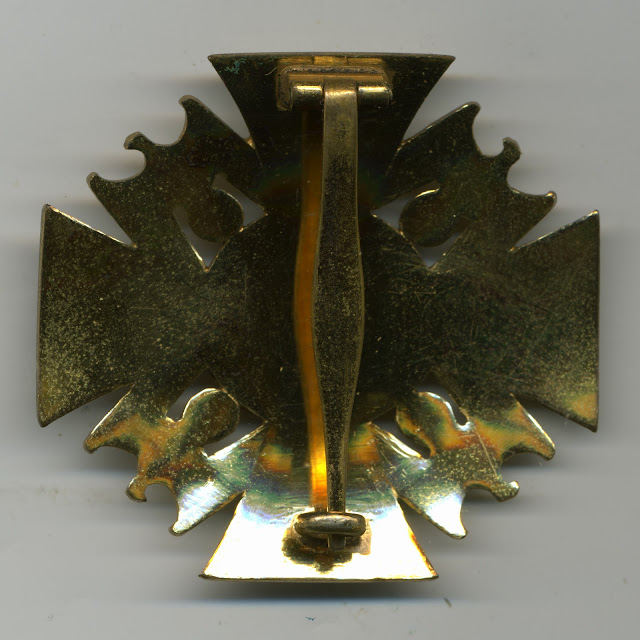 This order comprises of a cross of a part‚e or formy type, which is described as one that has arms curving outwards with straight ends, as is illustrated in the case of the Iron Cross Second Class.  The measurement across the arms is 48.5 mm, with the ends of the arms measuring 21 mm.  Round the edge of each of the arms runs a small raised edge line that measures 1 mm.  The outer edges of the arms of the cross are chamfered to form a central spine.  The thickness of the arms of the cross is 2.5 mm.  At the centre of the arms is a central medallion which measures 20.5 mm.  The central fields of the arms are infilled with black opaque enamel.  Into the quarters of the arms are placed eagles with semi furled wings and clutching an oak leaf wreath with a swastika within it, in their talons.  Each eagle's head faces to the viewer's right and is clearly defined.  The eagles' heads on copies of this award are poorly defined and reminiscent of chickens' heads.  The wings have a raised outer edge that runs from the eagle's body round to the point where the wing touches the outer edge of the arm of the cross.  The upper part of each of the wings is divided into two lines of distinct feathers, numbering five in the top and six in the bottom.  Running downwards are three lines of fletch with a gap between the inner line and the body of the eagle and the wreath.  The bottom of the wreath just touches the outer edge of the central boss.  The body of the eagle is crosshatched to represent the fletching.  The height of the eagle from the bottom of the wreath to the top of the head is 12 mm and the wingspan is 13 mm.  The thickness of the eagles across their chests is 2.5 mm.  Laid on top of the black opaque enamel field is a line 1.5 mm wide, made up of individual oak leaves, tip on stalk.  On the lines emanating from the central boss there are four individual oak leaves and on the ends, a further four but split into two and diagonally opposed.  The oak leaf line is held on to the body of the cross at the central boss by a round plate that has a small Golden Party Badge attached to it.  This is constructed in the same manner as that described in The Golden Party Badge 24mm - Type G, but in this case the oak leaf wreath measures 2.5 mm and was made up of seven oak leaves on either side of the tie.  Under the oak leaves are the lines that have been referred to as 'railway ties'.  At the centre is a panel which measures 15.5 mm and is convexed.  It has a fine raised edge line with a similar one inset by 0.5 mm.  The field thus produced is infilled with white opaque enamel.  There is a further line inset by 2.5 mm and this field has the inscription, 'NATIONAL - SOZIALISTISCHE - D. A. P. -', running round in capital letters with the rest of the field being finely pebbled.  The whole field is infilled with brick red translucent enamel.  The centre has a swastika with raised edge lines with the resultant fields infilled with opaque black enamel.  The swastika measures 7 mm across the tips of the arms, the rest of the field is infilled with opaque white enamel.  The cross has a thickness of 6 mm measured at the centre of the swastika. This award is vaulted and the reverse is completely plain.  It has a large hinge and hook with a tapered broad blade pin.  The whole of the reverse is gold plated and highly polished.  This award was to be worn on the breast.

There is no citation for the award that is known.  There are also no known recipients of the award.  However, there is an account of an award in, 'Fakes and Frauds of the Third Reich', second edition by Freiheir von Mollendorf, where he states, "No sooner was the book," this relates to his first edition, "released than we received a fair number of letters from reputable collectors, plus a number of post war photographs of the decoration itself.  We were most fortunate to receive a photograph from Dr. Erhard Lauterbach-Schrenk of this piece in pinback, in a red leather, eagle-and-swastika case with an urkunde (or presentation certificate) dated 9th November 1941, indicating that this was the "Ehrenkreuz d. NSDAP," or Cross of Honour of the Nazi Party.  Dr. Schrenk enclosed a copy of a Rundschreiben (official 'Round-Robbin') from the Gauleitung of the area, mentioning that on 9th November 1941, the 'Ehrenkreuz d. NSDAP' had been presented to Dip. . Dr. So-and-So by the Führer-Chancellery and in the name of the Führer for, "Continuing acts of the highest value to and fully consistent with the aims of the NSDAP".

The quote is of great interest and its verification would throw a great deal of light on the order as a whole.  The date of 9th November 1941 is definitely in line with Hitler's monologue, but predates it.  Does this mean that Hitler was formally announcing the order in the monograph?  Again, I would very much like to examine the said pieces and documents to verify their authenticity.

The presentation cases that are known to exist and are available for verification are as follows.  A case which has a red outer liner without lid designation.  The interior of the upper lid is white satin while the lower compartment section is red velvet.  The example in my collection is a square black card box that is finished on the exterior in imitation snakeskin. The hinge is produced by paper.  The inside of the lid is white silk and the lower part is black velvet with a cut-out to accommodate the pin of the award.  I believe this form to be the type of protective case employed by the manufacturer rather than the more elaborate form of presentation case. 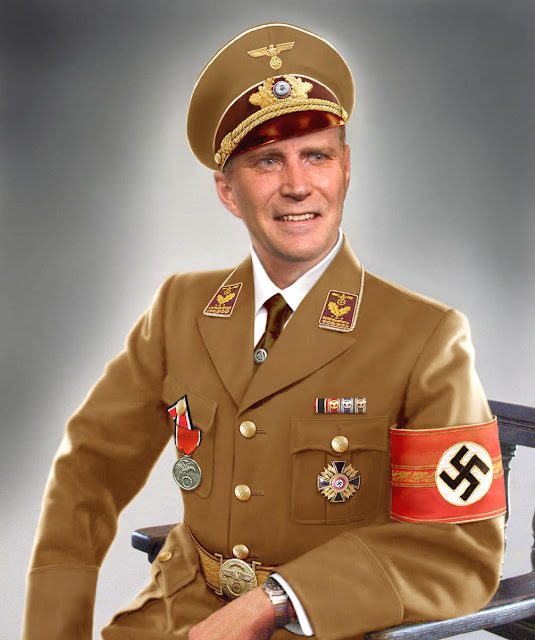 The Souval copy of the German Order - 3rd Class. To note are the Eagles in the quadrants, these are referred to as the Chicken head type. There are many other difference's that can be observed. 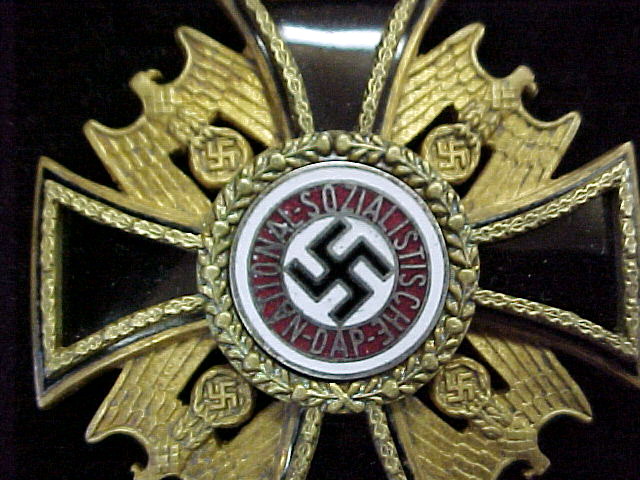 The Souval copy of the German Order. To note is the swastika which is attached to the outer circle. 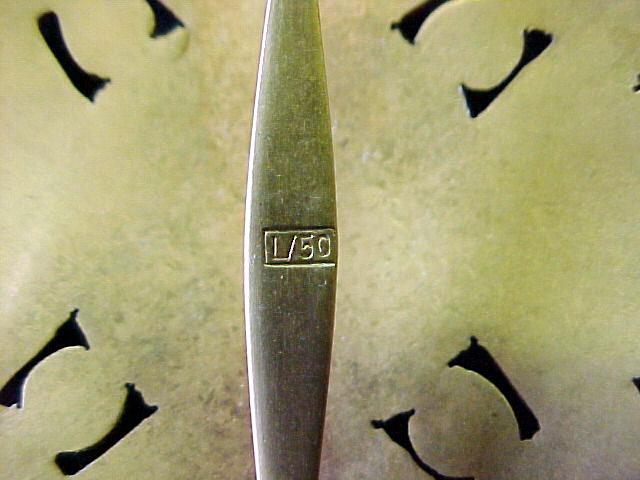 The makers mark is totally incorrect. Firstly it would not be applied to this piece. Secondly the mark which is applied to Eagle Orders is not correct. 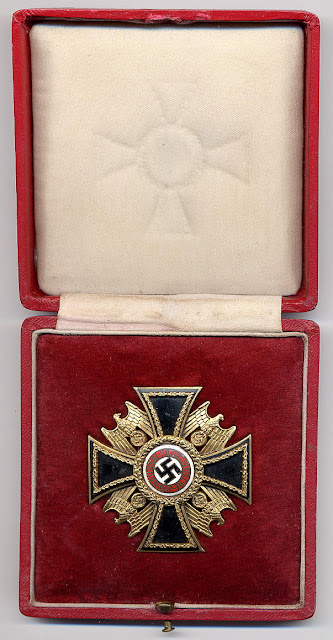 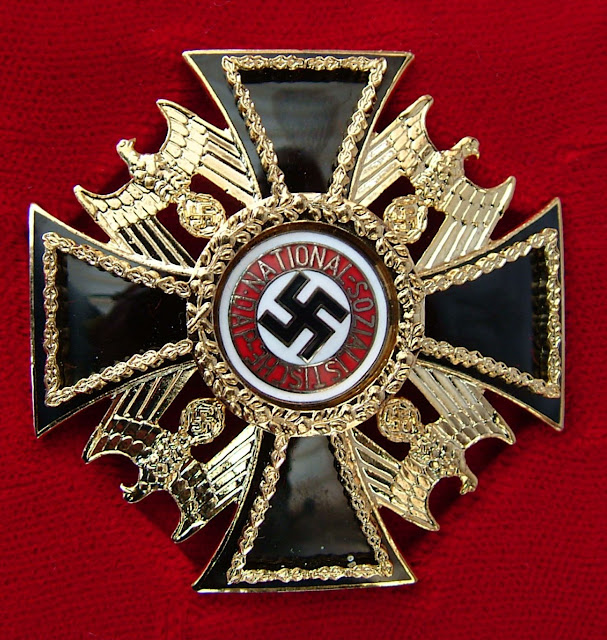 This copy is shown to give the collector the feel for a very bad copy. 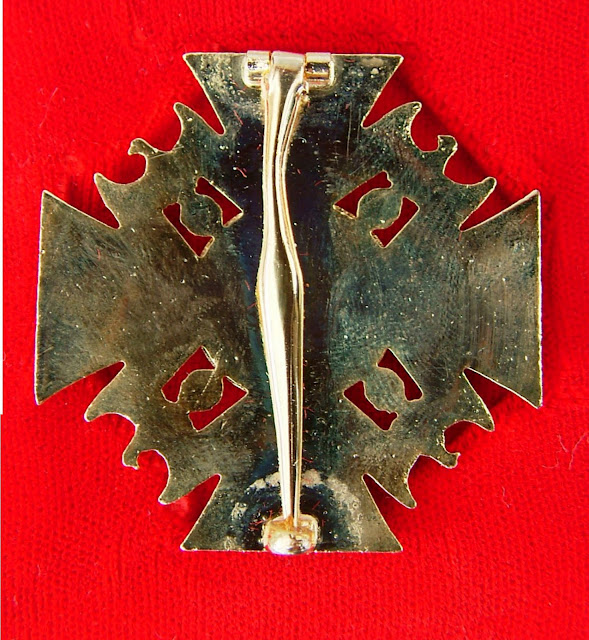 The reverse of the piece. It shows more than words can explain.
Posted by Christopher Ailsby at 16:27