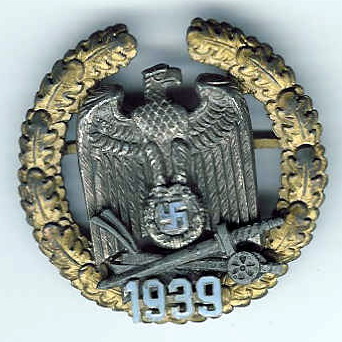 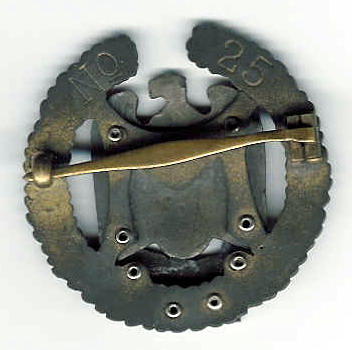 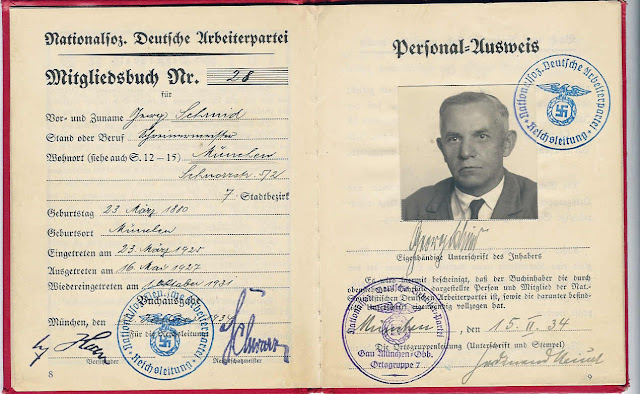 This badge comprises of a wreath of oak leaves that measures 53 mm across and has a width of 8.5 mm.  The wreath has an 8 mm gap at its apex and six bunches of three overlapping oak leaves on either side.  These are very well defined.  At the base is attached the date, '1939'.  These numerals are in filled with pale blue opaque enamel and measure 17 mm by 17.5 mm.  At the centre is a stylised eagle with down swept wings, this again is well defined, with two lines of individual feathers on each wing, nine in the top row and eight in the lower.  From this lower line run vertically six lines of fletch.  The innermost is voided from the legs of the eagle.  The eagle clutches a wreath of oak leaves in its talons and into the field is inset a panel that has a raised swastika, finished in blue enamel.  Beneath this is a horse-drawn plough that is crossed by a double-edged sword that has a broad quillon and twisted handle.  The wreath is finished in gilt and the eagle, plough and sword are patinated old silver. 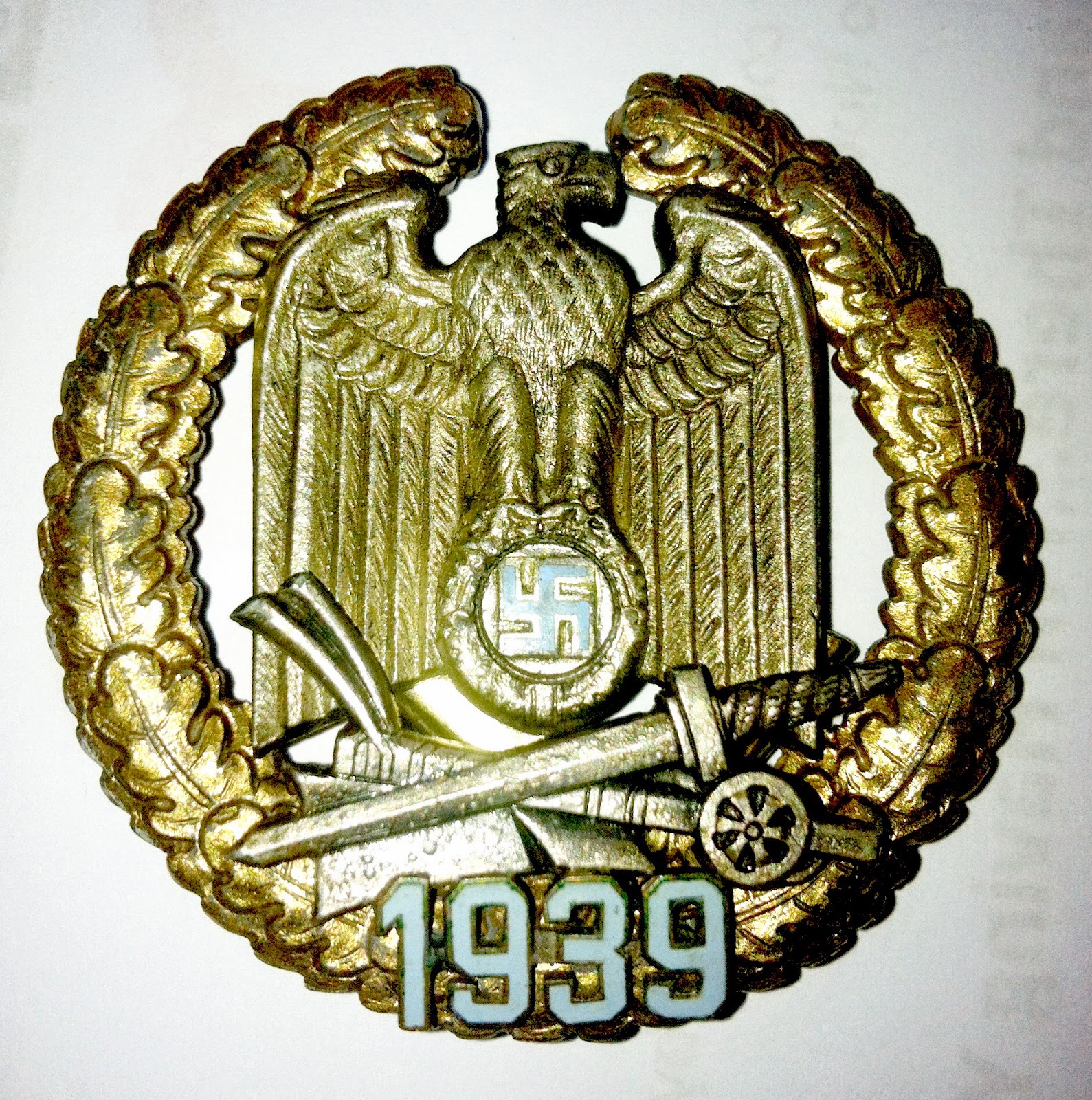 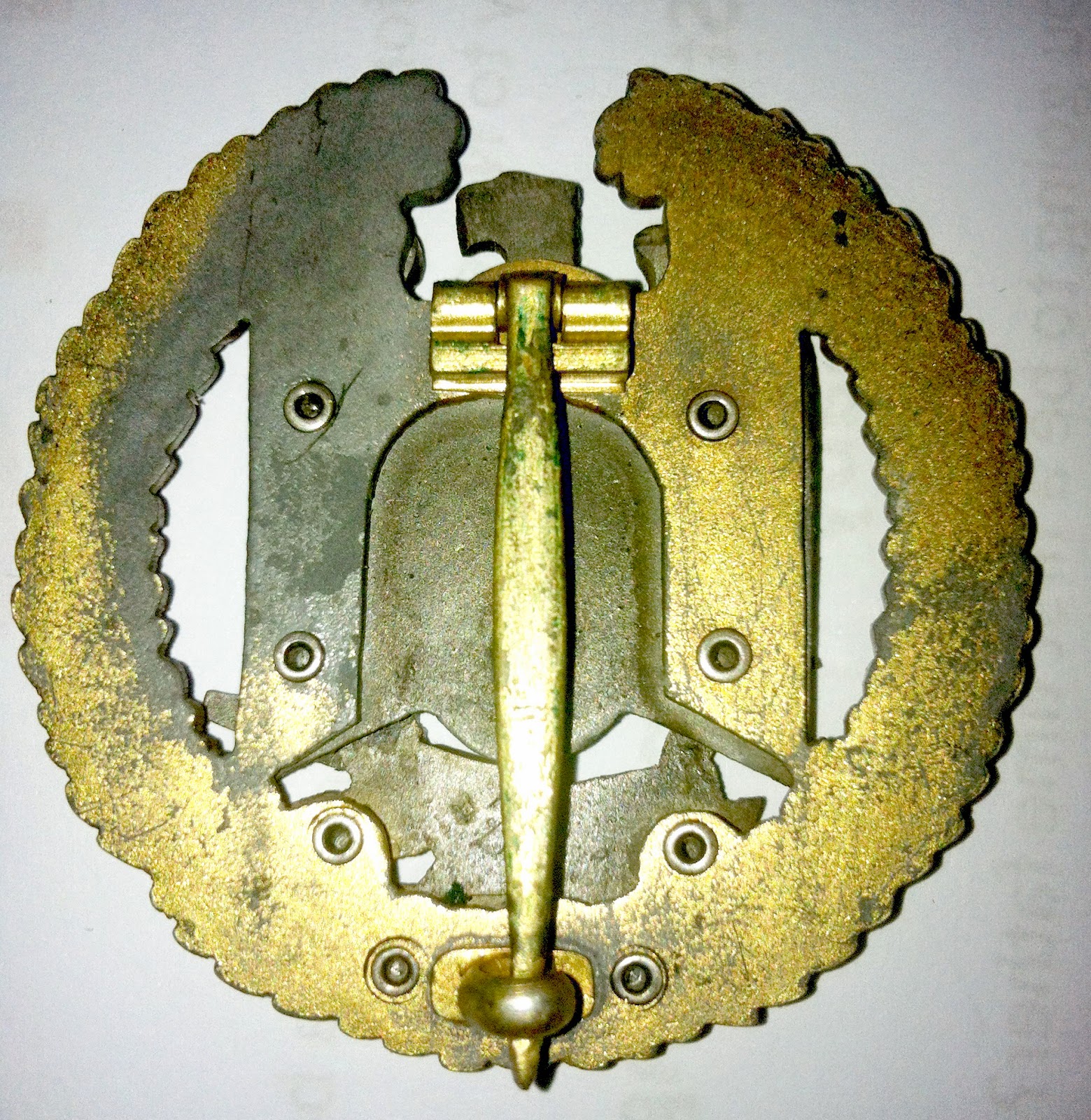 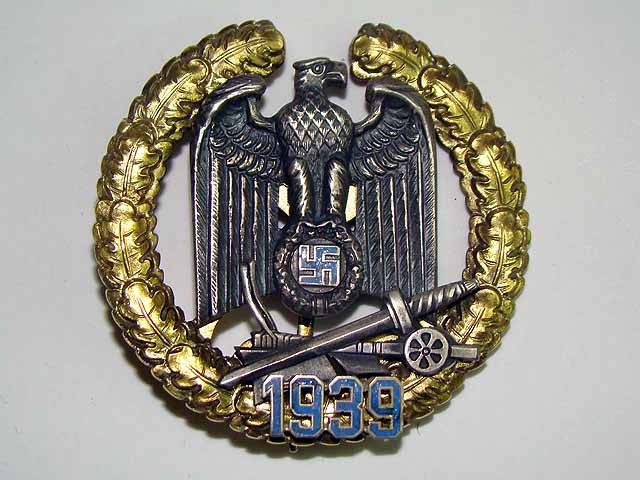 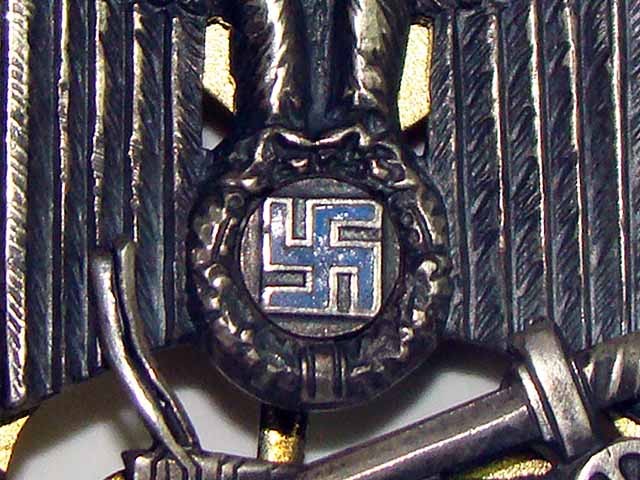 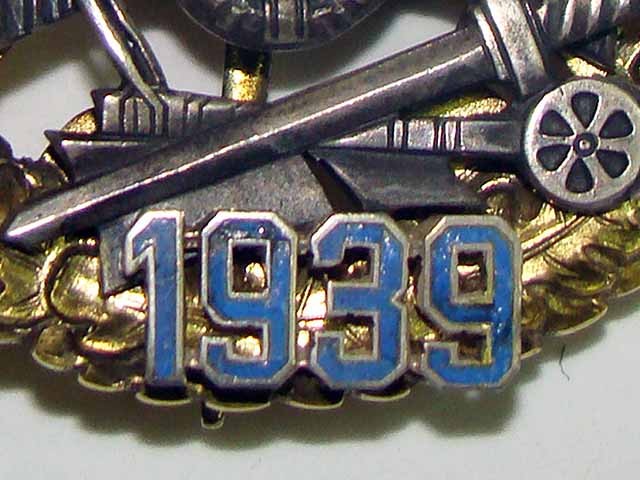 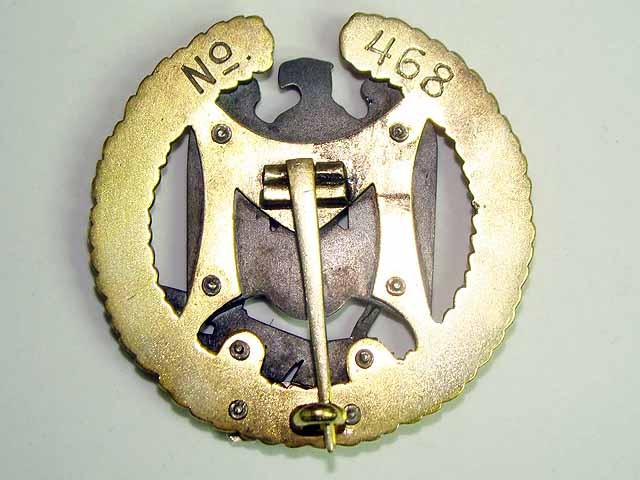 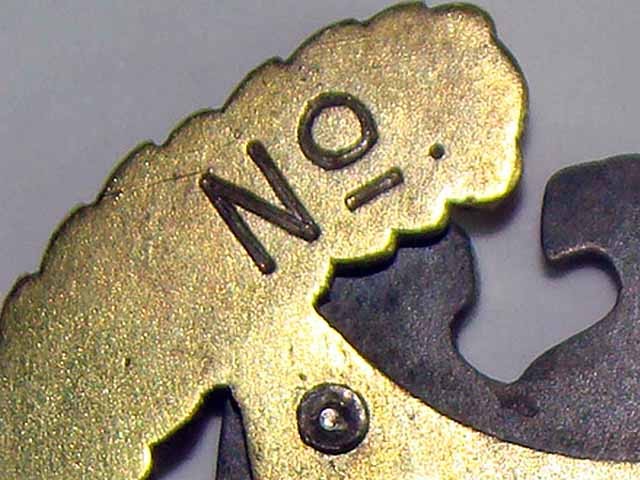 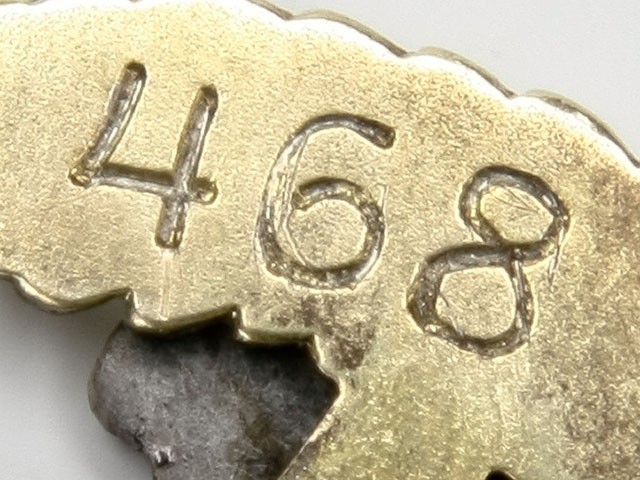 Hitler had used the motif of the sword and plough numerous times, for example:

"The mission of the National Socialist Movement is to give our nation political insight and to make it see its future goal fulfilled, not by the intoxicating vigour of a new Alexandrian campaign but by the industrious labour of the German plough, which only needs to be given land conquered by the sword."

The reverse is interesting in that the central part of the wreath has a 'M' form of construction, on to which the eagle is riveted by four small rivets.  At the base of the wreath are two further rivets that pass through two protrusions.  These hold the crossed plough and sword while the date is riveted through the wreath.  There is a massive hinge placed at the 'V' of the 'M' and a broad tapering pin that is secured by a massive 'C' hook which is placed midway between the two lower rivets.  At the apex of the wreath, on the left side, is engraved, 'No' and on the other side the issue number of the badge. It is interesting to note that there are a number of reverse combinations that hold the eagle. This tends to give the impression that a great number of these badges were produced. Manufacturer of the award was Rudolf Souval of . It is possible that this was not a true Gau badge in the sense of the “Old Gau Badges”, but was awarded as an award for the General Government.  A miniature of the award that measured 23 mm was produced to wear on civilian clothing.

The exact date of the institution of the badge is unknown but it was probably instituted in early 1940 by the Gauleiter Arthur Greiser.  The Gau was created on 26th October 1939, which incidentally is presumed to refer to the date on the badge, out of dismembered , along with Gau Danzig - , and was known as Gau Posen.  However on 29th January 1940, Gau Posen was renamed Gau Wartheland taking its name from the which ran through it.  The exact criteria for the award of the badge are unknown but it is presumed to reward merit in the building up and consolidation of the newly created Gau. The first award ceremony took place in October 1942, the anniversary of the establishment of the Gau Wartheland, when 156 Gau Warthe Commemorative badges were presented personally by Greiser.  Some interesting recipients were, Arthur Greiser and Wilhelm Koppe. In October 1943 another award ceremony was held, during which an unknown number of badges were presented. Among those awarded at the ceremony were Heinrich Himmler and Martin Bormann. 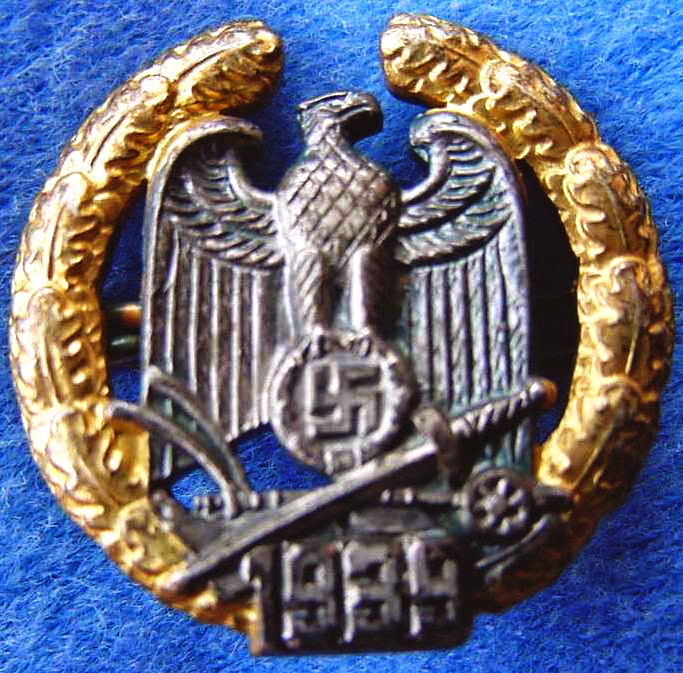 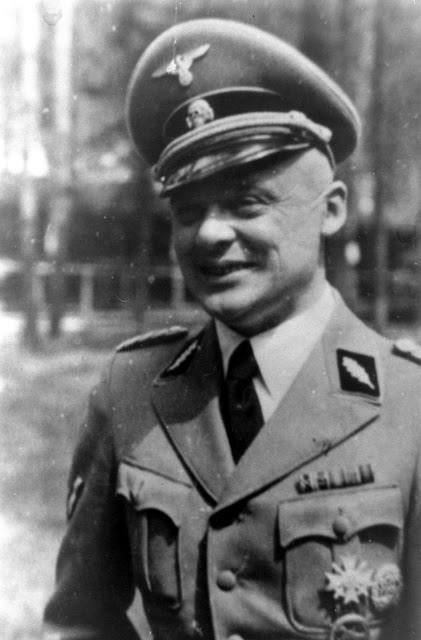 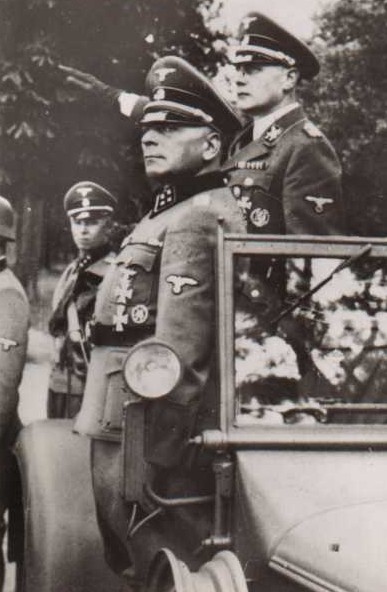 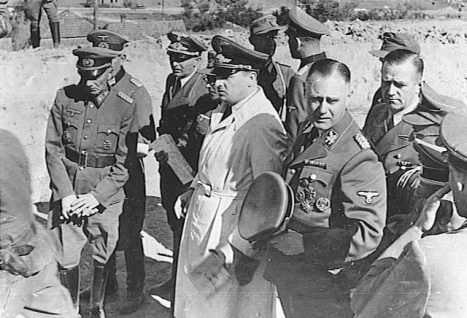 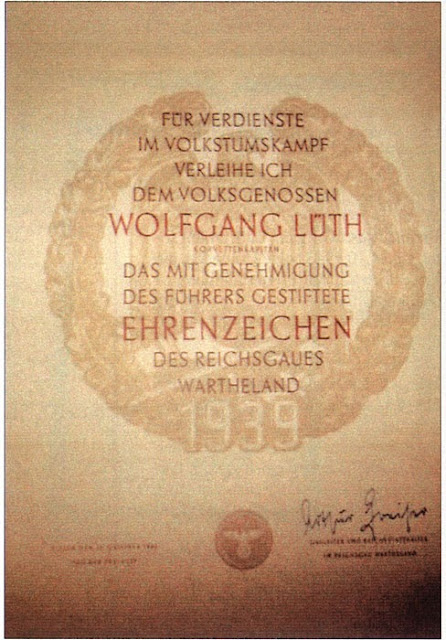 
These are both from Souval. This firm was one of the original producers of the award.﻿ 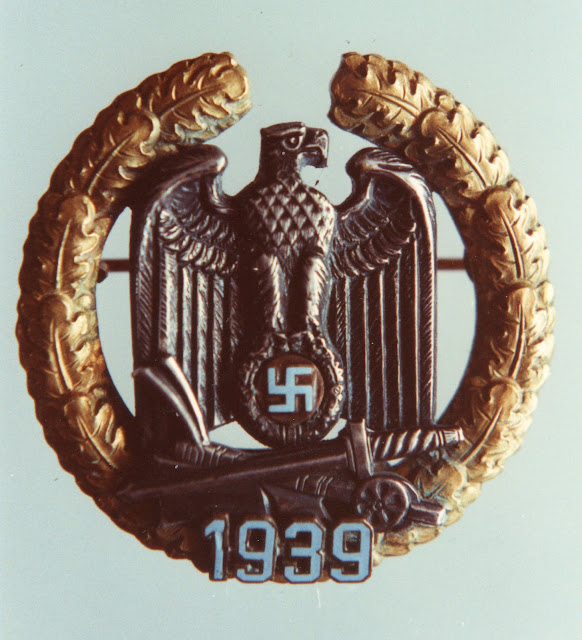 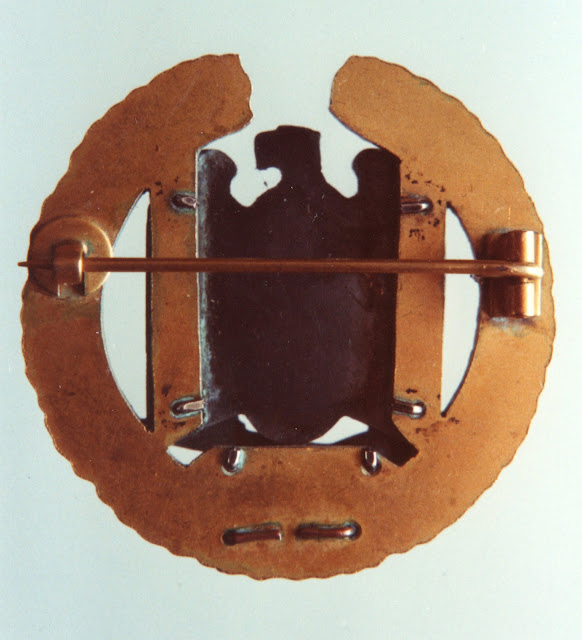 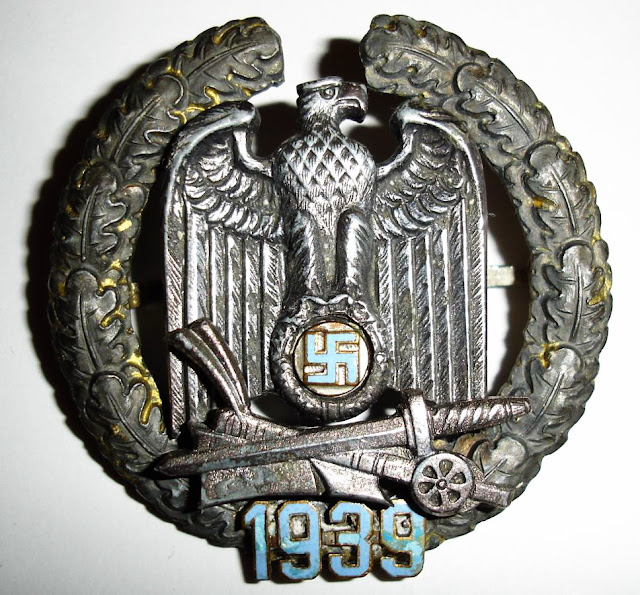 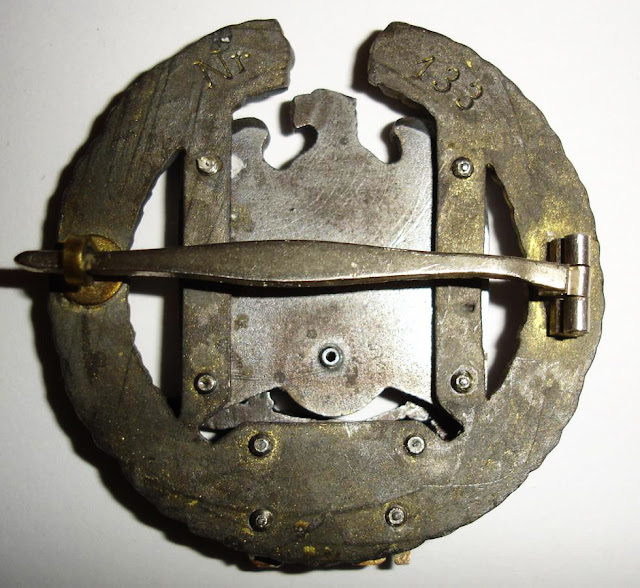 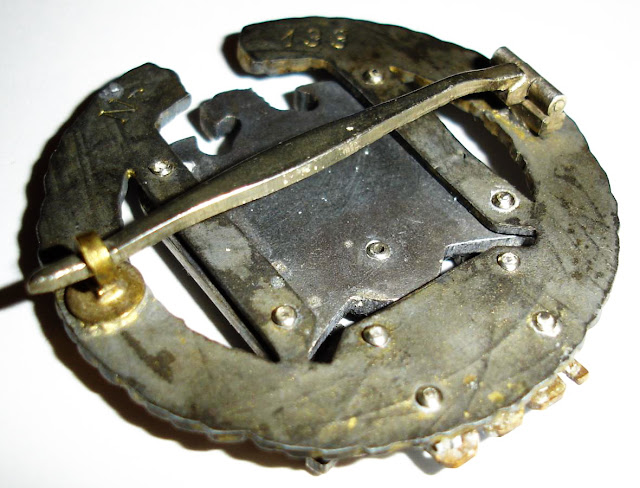