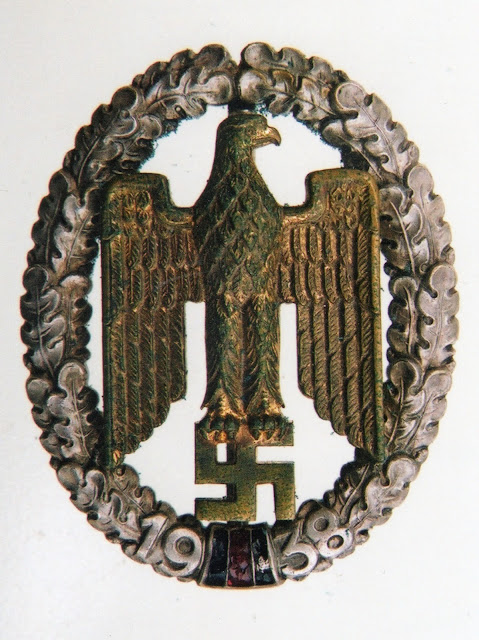 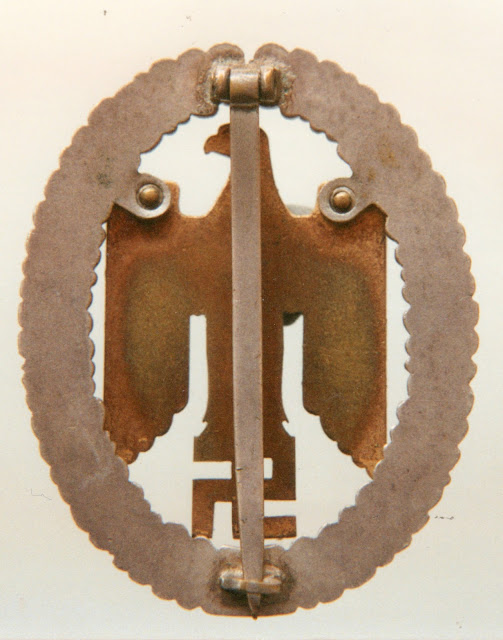 This badge consists of an oval wreath measuring 55 mm high by 44 mm wide with the breadth of the oak leaves constituting the wreath being 7 mm.  The wreath is finely struck from nickel silver and has a ribbon tie at the base that measures 7 mm at its mid point.  This is split into three equal sections that are enamelled in the colours of the , black, red, black.  On the left, in raised numerals, '19' and on the right, '38', the date of the founding of the Gau.  From these, on either side, are six bunches of two oak leaves that meet at the apex tip to tip.  The definition on the wreath is excellent and superimposed on to it is an eagle clutching a swastika in its claws.  The eagle is three dimensional with pronounced chest and elegant head, with an extended neck.  From the body extend its legs that are fully fletched.  The wings are down swept with an angular appearance.  The upper box portion of the furled wings has three lines of individual feathers, 2, 2 and 3.  The two lower lines have 5 in each.  From the lower line emanates five lines of vertical feathers.  The eagle measures 40 mm from the bottom of the swastika to the top of the head and 28 mm across the wings.  The wreath is 3.5 mm thick and 7 mm across the eagle's chest.  The eagle is produced from tombac that is gilded.

The reverse is flat with two protrusions, through which is riveted the eagle with round headed rivets.  At the top is a hinge that takes a flat bladed pin and at the base is a 'C' type hook.  Some examples were produced with the manufacturer's logo and the silver content mark.    This Gau Badge is one of the most finely produced of the political series and also one of the rarest.  It was worn on the left breast, below the Iron Cross First Class.  One recipient of the award was SA-Stabschef Wilhelm Schepmann.

This badge also had a finely made miniature for civilian wear. The miniature is a beautifully executed medal comprising as the large award of an oval wreath with a closed winged eagle surmounting a square standing swastika. The wreath measures 22 mm by 17.5mm and is 1.5 mm thick. The Eagle measures 17 mm by 11.5 mm and is 2mm thick. It is secured to the wreath by two small rivets one on either side of the wing. The needle pin is attached to the centre of the reverse of the eagle. 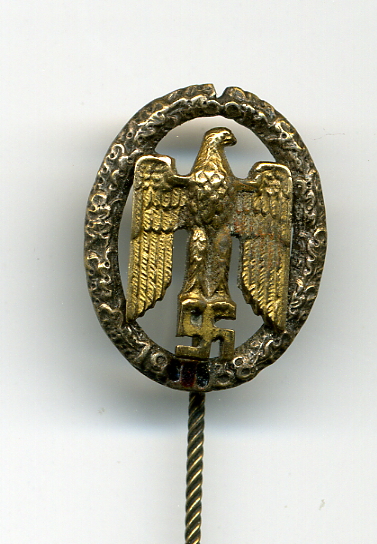 The Gauleiter of the Gau Sudetenland, Konrad Henlein, instituted this award in December 1943, thus making it the last officially recognised Gau Badge to be introduced.  The badge was to recognise the fifth anniversary of the founding of the Gau.  The exact details of the criteria for the award of this extremely rare badge are unknown, however on 18th December 1943, a regional newspaper, the Miihrischer Grenzbote printed an article with a photograph that said, “ Gau Sudetenland Honour Badge as was announced, Gauleiter Konrad Henlein presented the widow of the noted national socialist fighter of the Sudetenland, Hans Knirsch, on the l0th anniversary of his death, the first Gau Honour Badge for his historic accomplishments for the homeland. 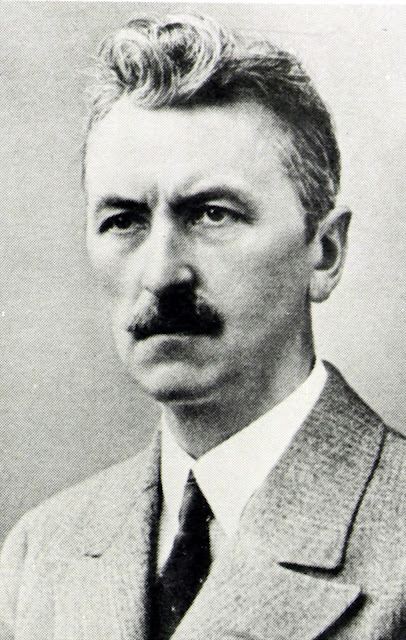 The noted national Socialist fighter of the Sudetenland, Hans Knirsch.

Thus, the public was notified that now even the Sudeten Gau, along with other Gau des Reiches had a honourable designation which put the Sudeten Gau on a level with the rest. These decorations commemorate the bitter struggles of the movement before the transfer to power and also express the yearning of the homeland in its 20-year time of struggle. This decoration will, according to a "Schriftungsbrief des Gauleiters" be awarded for "extraordinary and dedicated effort in maintaining the German ness of our homeland during the times of the highest national crisis, and for outstanding deeds for Gau Sudetenland!" It will be awarded annually on October I. The motif of this decoration was designed by graphic artist, Franz Moser, in cooperation with an engraver from Jablonec, Otto Zappe, who transferred the design into an engraving. It depicts a golden Reich eagle surrounded by an oak wreath. The eagle carries in its talons a swastika. The oak wreath bears a banner in the traditional colours of black/red/black and the year 1938, the fateful year for the Gau, during which, through the efforts of the Fuhrer, the Gau was returned to the Reich. The decoration depicted here is actual size and is intended to be worn on the left side of the chest.” 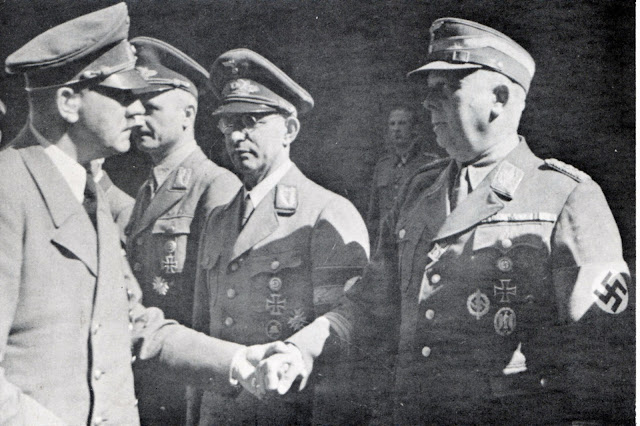 To consider the slightly complex situation of the Sudetendeutsche after the dismembering of the Austro - Hungarian Empire and the formation of esoterical countries that had no validity, as Churchill said, “how can a country survive with a name that no one can spell”?

In 1919 the DNSAP (Deutschnational socialistische Arbeiter Partei) was established in Duchcov in the , and in 1920 it declared its association with the National Socialist movement of Adolf Hitler. In 1933 this party was dissolved and replaced with the newly established Sudetendeutsche Heimatfront (SHF) with Konrad Henlein as its leader. 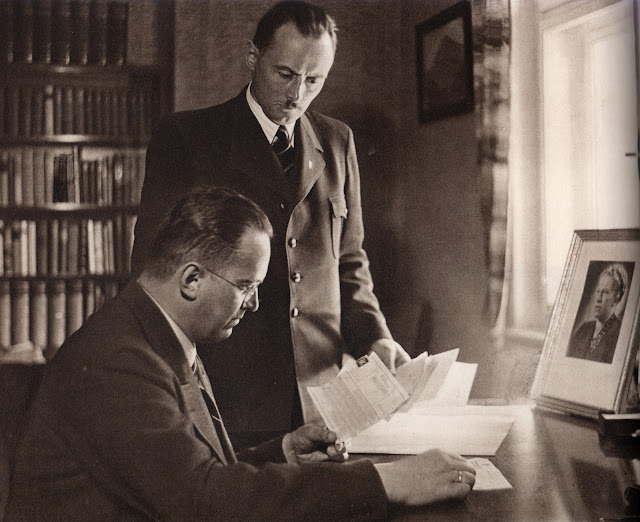 In late 1933 Der Volksdeutsche Rat was established in under the leadership of Rudolf Hess, which supported Henlein fully. In 1935 the SHF after a formal dissolution, was renamed the Sudetendeutsche Partei (SDP) and became the strongest pro – German party in the with the 19th May 1935 elections. Within the framework of the Party the Freiwilliger Schutzdienst (FS) was instituted on 14th April 1938 and in September it became together with the Physical Exercise Units, the core of the newly created Freikorps of Sudetenland. 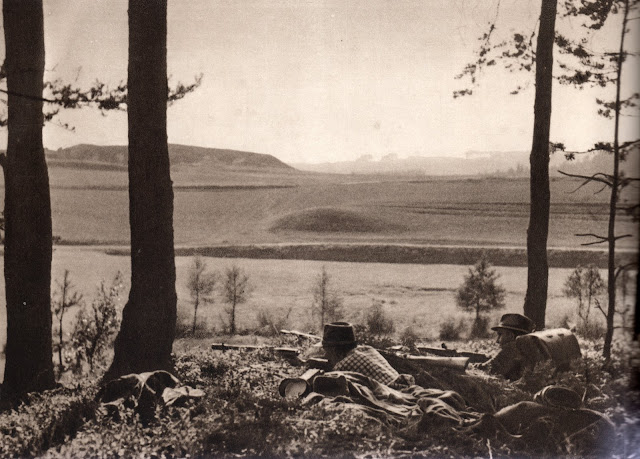 Freikorps of Sudetenland on boarder patrol.

After the German Army’s occupation of in October 1938 the Freikorps was dissolved and Henlein was named a Reichskommisar für Sudetendeutschen Gebiet. At this time he and his family moved into a confiscated Jewish villa in (Reichenberg). By a decree of 30th October 1938 by Adolf Hitler, the Gau NSDAP Sudetenland was established and the headquartered in . Henlein was named its Gauleiter, and the Stellvertreter was Karl Hermann Frank, who was later named Secretary of State and in 1943 a State Minister of the “Potektorat Böhmen und Mähren”. On 5th November 1938 Rudolf Hess officially transferred the SDP to the NSDAP in in the presence of the “Blood Flag”. From May 1939 Henlin was also named “Reichstatthalter Ostmark und . 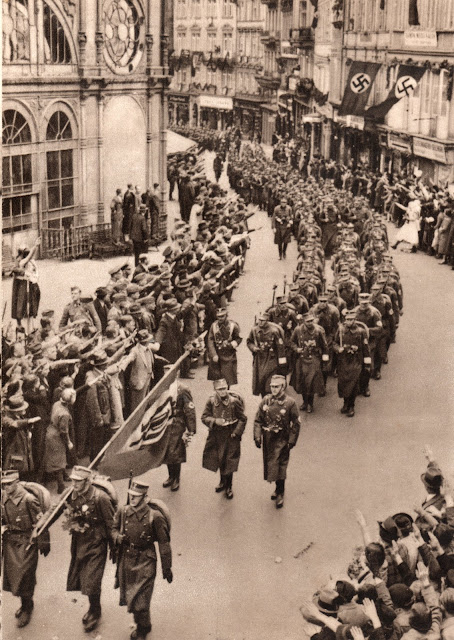 Freikorps of Sudetenland on parade after the occupation. 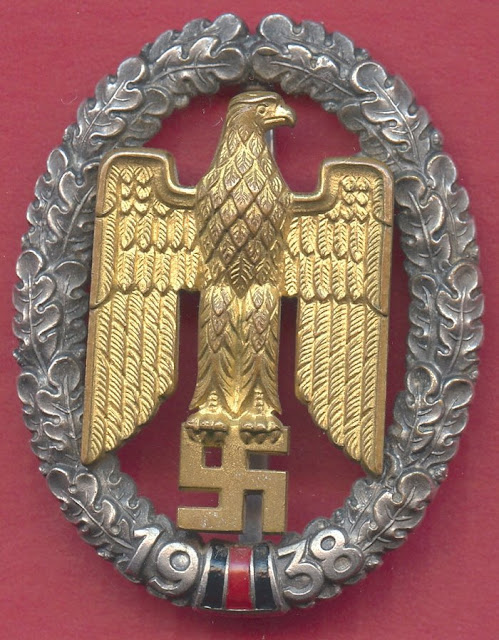 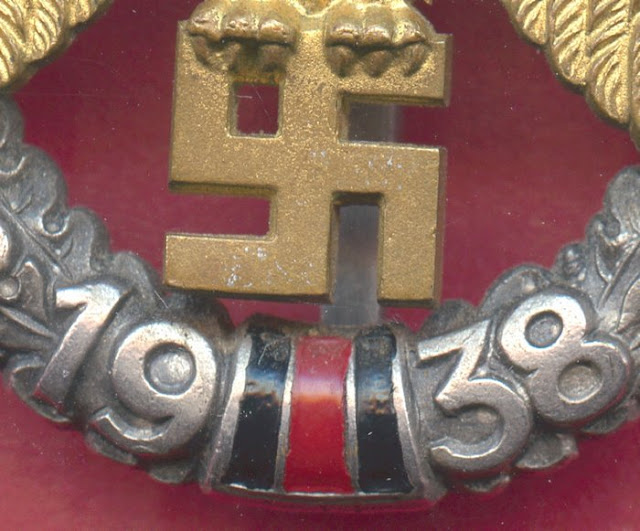 NOTE THE DIFFERENCE IN THE RIVETS AS AGAINST THE ORIGINAL. 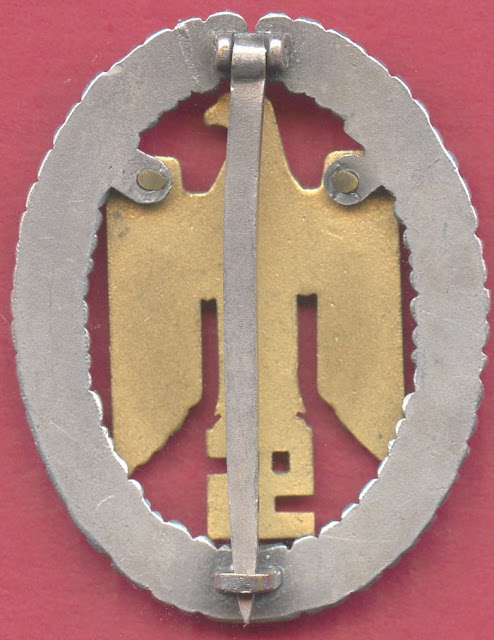 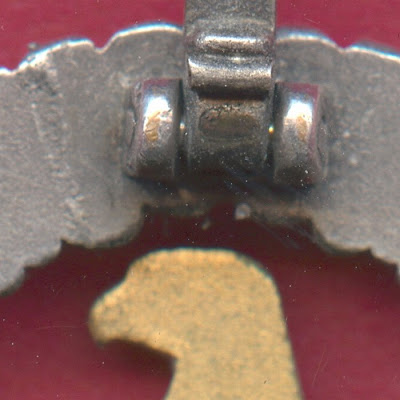 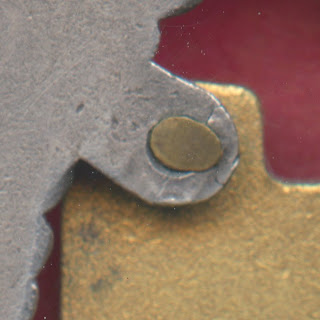 This is a less well produced Fake.
Note the paint in-filled tie at the base of the wreath as opposed to the enamel employed in the better quality fake. 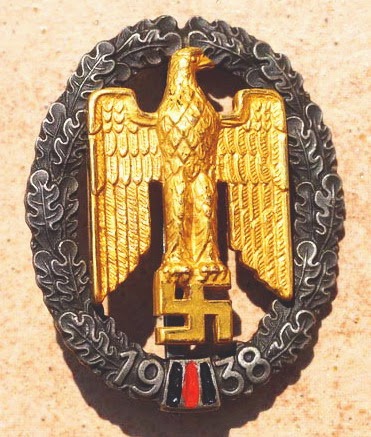 Posted by Christopher Ailsby at 09:53