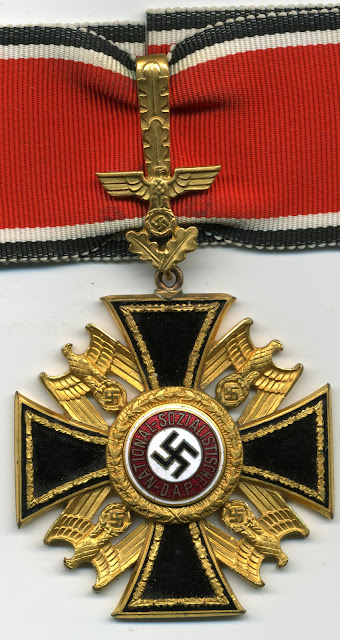 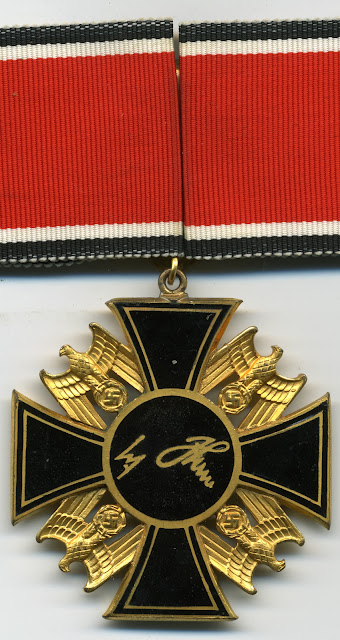 This order comprises of a cross of a part‚e or formy type, which is described as one that has arms curving outwards with straight ends, as is illustrated in the case of the Iron Cross Second Class.  The measurement across the arms is 48.5 mm, with the ends of the arms measuring 21 mm.  Round the edge of each of the arms runs a small raised edge line that measures 1 mm.  The outer edges of the arms of the cross are chamfered to form a central spine.  The thickness of the arms of the cross is 2.5 mm.  At the centre of the arms is a central medallion which measures 20.5 mm.  The central fields of the arms are infilled with black opaque enamel.  Into the quarters of the arms are placed eagles with semi furled wings and clutching an oak leaf wreath with a swastika within it, in their talons.  Each eagle's head faces to the viewer's right and is clearly defined.  The eagles' heads on copies of this award are poorly defined and reminiscent of chickens' heads.  The wings have a raised outer edge that runs from the eagle's body round to the point where the wing touches the outer edge of the arm of the cross.  The upper part of each of the wings is divided into two lines of distinct feathers, numbering five in the top and six in the bottom.  Running downwards are three lines of fletch with a gap between the inner line and the body of the eagle and the wreath.  The bottom of the wreath just touches the outer edge of the central boss.  The body of the eagle is crosshatched to represent the fletching.  The height of the eagle from the bottom of the wreath to the top of the head is 12 mm and the wingspan is 13 mm.  The thickness of the eagles across their chests is 2.5 mm.  Laid on top of the black opaque enamel field is a line 1.5 mm wide, made up of individual oak leaves, tip on stalk.  On the lines emanating from the central boss there are four individual oak leaves and on the ends, a further four but split into two and diagonally opposed.  The oak leaf line is held on to the body of the cross at the central boss by a round plate that has a small Golden Party Badge attached to it.  This is constructed in the same manner as that described in The Golden Party Badge 24mm - Type G, but in this case the oak leaf wreath measures 2.5 mm and was made up of seven oak leaves on either side of the tie.  Under the oak leaves are the lines that have been referred to as 'railway ties'.  At the centre is a panel which measures 15.5 mm and is convexed.  It has a fine raised edge line with a similar one inset by 0.5 mm.  The field thus produced is infilled with white opaque enamel.  There is a further line inset by 2.5 mm and this field has the inscription, 'NATIONAL - SOZIALISTISCHE - D. A. P. -', running round in capital letters with the rest of the field being finely pebbled.  The whole field is infilled with brick red translucent enamel.  The centre has a swastika with raised edge lines with the resultant fields infilled with opaque black enamel.  The swastika measures 7 mm across the tips of the arms, the rest of the field is infilled with opaque white enamel.  The cross has a thickness of 6 mm measured at the centre of the swastika. On to the centre of the upper arm is placed an eyelet which is attached to a rhomboid that is soldered to the cross.  Through the eyelet is attached the neck ribbon suspender.  This is also the same as that described in The German Order - olden Cross with Laurel Wreath and Swords 1st Class with a piece of wire that passes through the eyelet instead of the flat piece of Tomback that forms a hinge that pivots on the central connecting rod.  There are two forms of suspender known, one is as described and the other is identical but is without the two oak leaves that are on either side of the wreath that surrounds the swastika.  From the information given it would seem that the recipients of this grade of the order were Karl Hanke, Karl Holz and Arthur Axmann.  The box for the award would be as previously described in The German Order - Golden Cross with Laurel Wreath and Swords 1st Class.  The citation for this award is unknown. 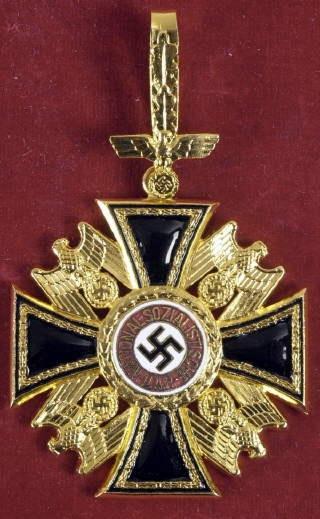 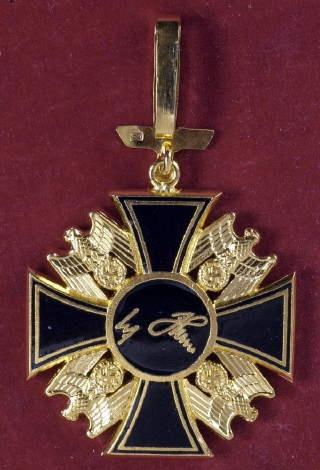 Posted by Christopher Ailsby at 16:01