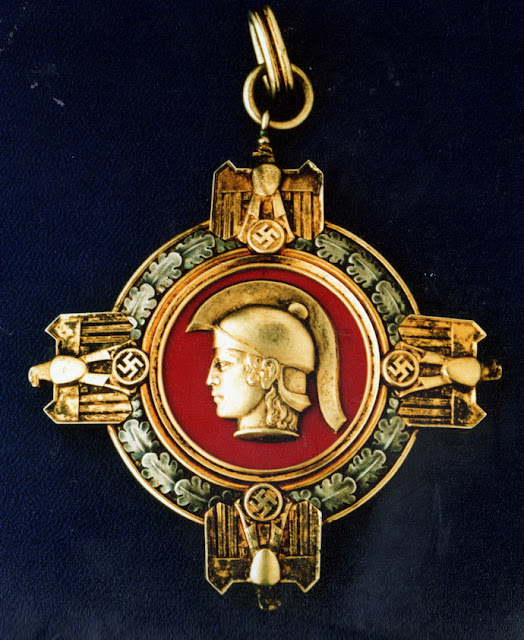 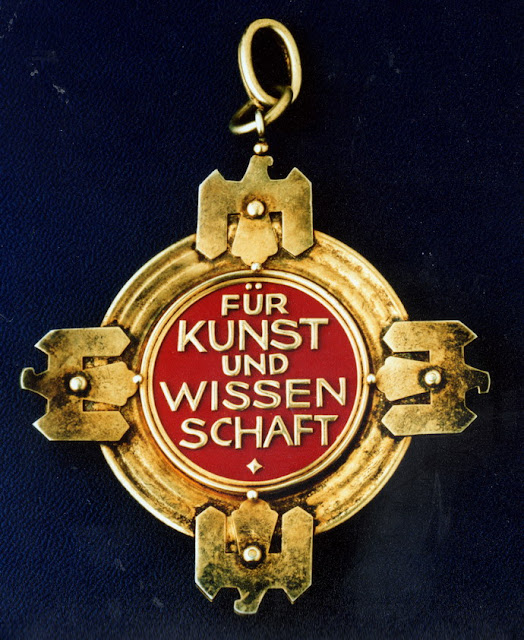 This badge consists of a circle that measures 63 mm and has a raised 1.5 mm edge line with a similar one indented by 6.5 mm.  At 9, 12, 3 and 6 o'clock is positioned a closed winged eagle clutching a circle within which is a swastika.  These are formed hollow, as is the circle and the eagles are gilded.  On to the tramline produced and between the eagles are positioned three single oak leaves and a part leaf where the leaves touch the eagle's wings.  These are oxidised with an old smoked effect.  Inside the inner line is a further 2.5 mm band with a routed 'V' slot.  This is pushed into the circle and secured by four small pins.  At the centre is a plaque of brick-red enamel with the head of Athena attached.  The plaque is constructed of two parts and held together with a further four pins.  The outer ring then fits to the body of the badge by the means of a bayonet fastening.  From the top of the head of the uppermost eagle, where a small ball finial has been attached, is a circular eyelet through which runs a ring that has an oval constructed of two pieces of circular rods of silver.

The reverse is plain but shows the reverse of the eagles, which have a ball rivet in the middle of their flat reverse.  The central medallion has an outer edge line and a smaller inner one, with four small balls at 6, 9, 12 and 3 o'clock.  The central field is brick-red enamel with the individually applied letters that make up the inscription, 'FÜR, KUNST, UND, WISSEN, SCHAFT, *'.   These are held on to the plate by small pins.  The whole of the metal of the reverse is gilded.  The construction of this and the sister piece is of the highest order and comprises of some twenty individual pieces.  It is more a technical work of art than that of a jeweller.

The purpose of this award, or badge of rank, can only be premised but it is most probably for the President or Grand Master of the order.  Most European orders are so based with a Chancellor and First and Second Vice Chancellors with no lesser exception than the 'Der Königlich Preuβische und Deutsche Orden Pour le Merite für Wissenschaft und Künste', which had a president's neck chain.  This order had Kanzler des Ordens, Erste Vizekanzler and Zweite Vizekanzler and members.  With its closure in 1933, although the order continued until the end of the war, Hitler would have seen fit to base his national prize on similar lines.  The method of suspension of this badge indicates that it was to be attached to something that would allow it to be suspended from the neck and therefore hang on to the chest. 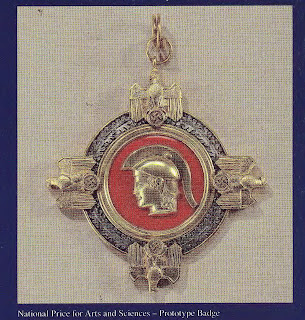 A second example has recently be found and offered for sale in Germany. This gives rise to the assumption that these pieces are not Proto Types, but pieces that are in the hierarchy of the Order.
Posted by Christopher Ailsby at 10:13