Combined Pilots and Observers Badge in Gold with Diamonds 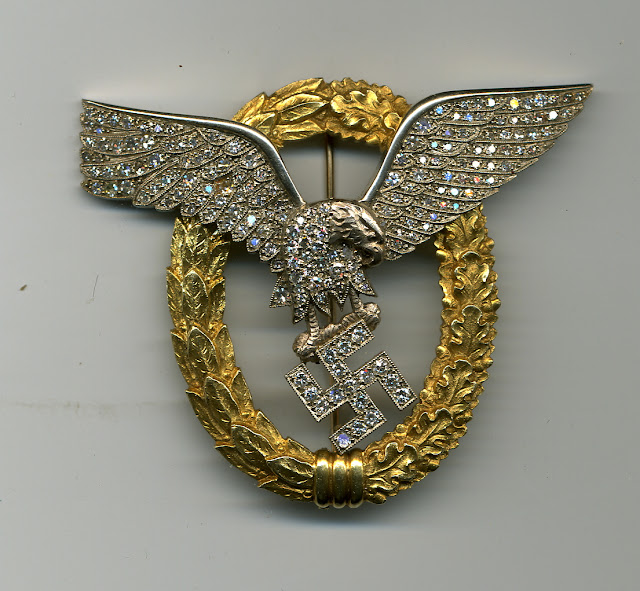 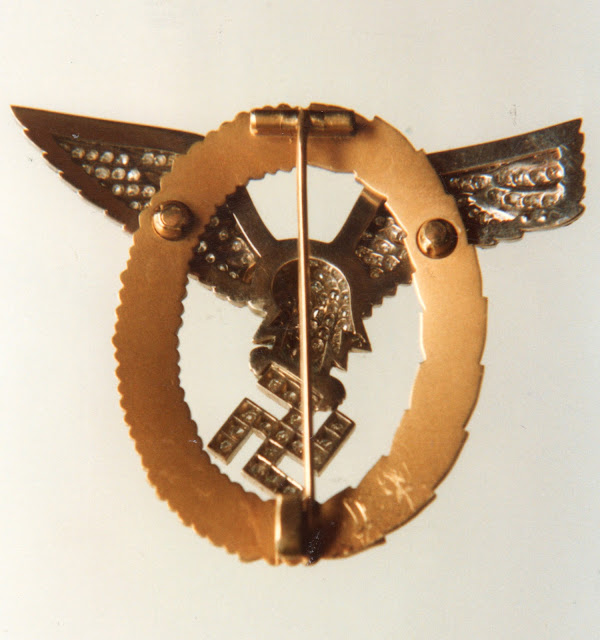 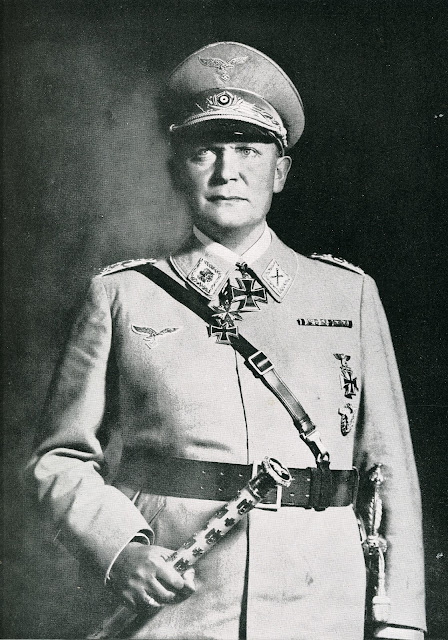 Reichsmarschall Herman Göring's with the Badge badge in wear.

This award was conceived during the summer of 1935 with the first bestowal-taking place on 11 November 1935.  It is interesting to note that both the inception and first presentation pre-date the introduction of the Combined Pilots and Observers Badge, which was introduced on 26 March 1936.  Furthermore, the Viennese jeweller, Rudolf Stübiger, produced the badge in .  The construction is quite unique with the whole of the badge being hand produced.

The wreath is cast and then hand finished in the same design as that employed on the Pilots Badge.  The wreath measures 52.5 mm by 41.5 mm with a width of 7.5 mm.  The general appearance of the eagle differs from that of the Pilots Badge with the wings being enlarged, the wingspan measuring 65 mm while the depth of the left wing is 12 mm and the right, 15 mm.  The eagle is constructed to allow the stones in the wings to have light coming from behind, enhancing the fire of the diamonds.  The edges of the feathers are all slightly pebbled, as is the outside of the swastika.  This measures 12 mm across and the individual arms are 3 mm wide.  The upper parts of the wings are highly polished, which compliments and enhances the appearance of the fletching.  The general appearance of the eagle is larger and the legs are spread with a gap between them.  The legs of the eagle are finely detailed.  There are 36 diamonds in the right wing and 31 in the left.  A total of 19 are inlaid in the eagle's body.  18 small diamonds are inlaid in the arms of the swastika.  The whole of the eagle's frame is constructed in platinum while the wreath is made of 22 ct real gold.

The reverse of the wreath is flat and has a matt finish with a thin barrel hinge at the apex.  The pin is of a thin, needle type and is retained in a unique holder acting as a safety catch.

The eagle has a 3 mm flat frame running round the edge of the wing and the body, which is employed to strengthen the structure of the eagle.  The wings have a strut of similar construction running across them, which is covered by the wreath.  On to this is attached a screw post which fits through individual holes drilled in the wreath, securing the eagle to the body of the wreath.  The eagle is held on to the wreath by two massive screws.

In correspondence with the firm of Rudolf Stübiger, his son indicated that they produced 70 of these badges.  On the first of these badges only the shop number was scratched on the reverse of the badge in the position of the hinge.  After 1938, when became part of the Greater German Reich, they placed their logo on the reverse of the eagle.  This information gives one a good clue to the period and therefore the person to whom a badge was possibly awarded.

This badge was possibly the most exciting flying badge of any country.  Apart from its obvious beauty, the rarity and the people to whom it was awarded, notably Herman Göring himself, it also rewarded some of the bravest of the Luftwaffe pilots.  The first award of the badge was presented to the chief of the Luftwaffe General Staff, Generalleutnant Wever, on 11 November 1935 and led to the award of 70 other persons.

The Known Recipients were; Many misbelieves have been constructed around the award of the Combined Pilots Badge with Diamonds and the reason why some of the officers had been awarded the badge.

The Combined Pilot and Observers Badge was authorised to be awarded in special cases to foreigners in recognition of special services rendered to the Luftwaffe.  An honorary presentation of this badge was normally made to foreign attachés upon their return to their home station.  It is interesting to note that one of the first honorary awards of the badge was to Benito Mussolini, who was awarded the badge in April 1937.  The citation clearly states that it was for, 'Das Goldene Flugzeugführer und Beobachter-Abzeichen', which translates to, The Golden Pilot and Observer Badge.  However, Angolia has stated that this citation was for the Combined Pilots Badge with Diamonds.  Göring, who personally pinned it to his tunic, conferred the Combined Pilots Badge with Diamonds upon Mussolini on 28 September 1937. 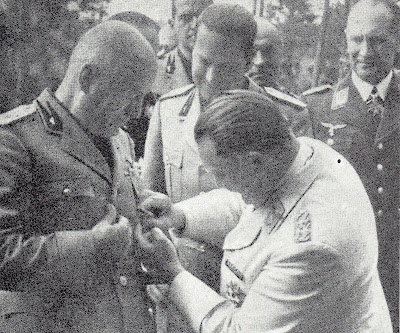 The Luftwaffe's Highest award is bestowed upon the Duce. 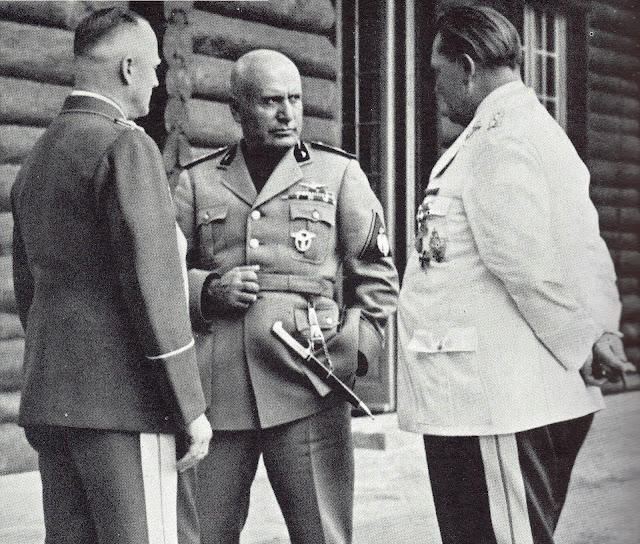 After the presentation of the Combined Pilots and Observers Badge in Gold with Diamonds, Mussolini converses with GÖRING and General der Luftwaffe Bruno LÖRZER.

Andrew Mollow, in a letter to 'Guns, Weapons & Militaria' in December 1981 entitled, 'Mit or Mitout Diamonds?', said, 'In pointing out the error in Chris Ailsby's article on the Order of the German Eagle, David Littlejohn has contributed to a basic misunderstanding which exists concerning the Luftwaffe Pilot/Observer Badge.  David Littlejohn refers to the Pilot/Observer Badge in Gold and Diamonds awarded to Benito Mussolini in September 1937.  Whereas most post war publications on German orders and medals refer to only two classes or categories of this badge, I believe there were three.

The basic badge with silver eagle on an upright gilt metal wreath was awarded to Luftwaffe aircrew on successful completion of their flight training.

As a special personal award, Göring introduced sometime in 1935 a Pilot/Observer Badge in Gold and Diamonds.  This badge was awarded to prominent members of the Luftwaffe, most or all of whom had been at one time or another qualified pilots.

The third class of this badge was a version in which both the eagle and wreath were in solid gold.  This badge Göring awarded to foreign heads of state such as King Boris of and Benito Mussolini and a very few eminent Germans such as the Reichsführer of the SS, Heinrich Himmler and SS-Oberst-Gruppenführer, Panzer-Generaloberst der Waffen SS Sepp Dietrich. 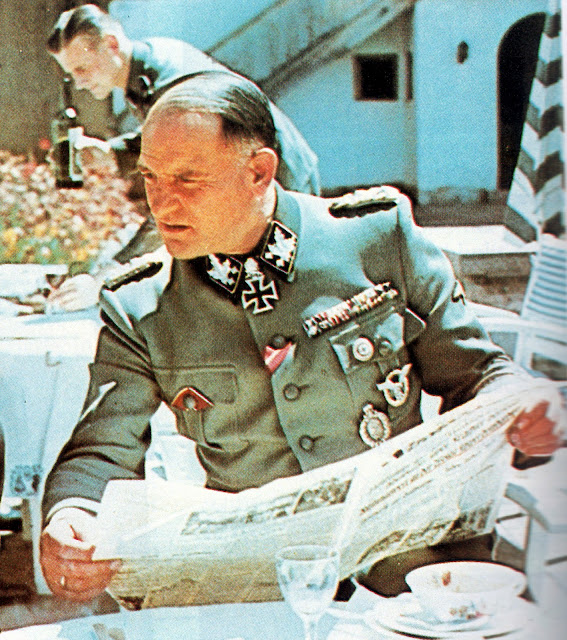 SS-Oberst-Gruppenführer, Panzer-Generaloberst der Waffen SS Sepp Dietrich.
This poses an interesting question as to whether there was such an animal as the Golden Pilot and Observers Badge and was it upgraded to the diamond award, as those named eventually received the award with diamonds and was this form used to reward friendly nations' politically appointed air personnel.  As yet, a gold badge produced in gold has not been observed.

The criteria for the award was that each recipient must be the holder of a pilot's licence.  This pilot's licence could have been either in the civil form, to encompass single engine aeroplanes and even to have allowed the consideration of the holder of a glider pilot's licence.  This would have qualified them for the badge.  This explains the entitlement of the badge for some of the more unusual bestowals namely, Himmler and Dietrich.  It is also believed that Dr. Fritz Todt was a recipient of the award but this has yet to be fully confirmed.  Upon the death of the holder, the badge had to be returned to Göring's personal office.  This was the case with General Korten who was mortally wounded in the bomb plot attempt of 20 July 1944.  After his death, the badge was not immediately returned and Göring's office was most indiscreet in requesting its return before his body was cold in its grave.

Hansen-Nootbar recalls one argument between Dönitz and Göring which ended when Göring unpinned the diamond studded pilots decoration from his exquisite uniform and handed it to Dönitz who, to the delight of the officers watching them, unpinned the U-boat decoration from his own service blue jacket and handed it to Göring.  It was a typically nimble and appropriate response.

Von Puttkamer gives a shorter version of this episode in his memoirs, implying that from then on Dönitz made his way successfully with Göring.  One is left wondering about the incident.  Was it the force of Göring's personality and intelligence or the aura of his power and the long established position he held in the Nazi hierarchy or loyalty to the Führer perhaps, that caused Dönitz to respond as he did and humour and get along with the Reichsmarschall in public, while privately regarding him as a national disaster.  For, when he and Hansen-Nootbar were alone they referred to Göring as, 'the grave digger of the Reich' or 'the fat one'.  Whether this symbolic gesture actually constituted the award of the two badges to the two personages is doubtful but undoubtedly Dönitz was awarded the badge.  It is less likelylikely that Göring received the Submarine Badge with Diamonds from Dönitz.

The box for this decoration is uncertain and it is considered that it was just a jeweller’s case, which transported the badge to the award ceremony. 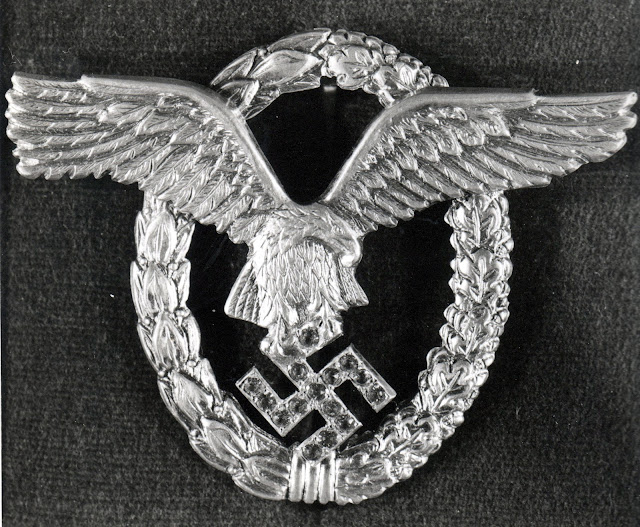 This is a basic Souval Fake Pilots badge with paste settings. It is a fancasy piece. 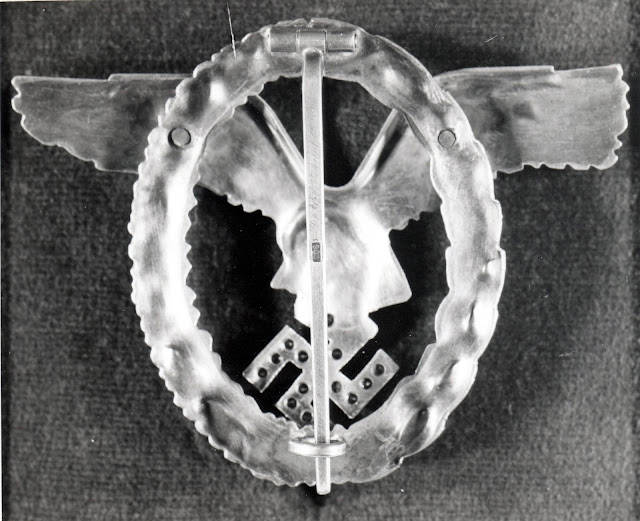 The reverse showing a 800 stamped in an oblong. This is to give the impression of a silver mark. 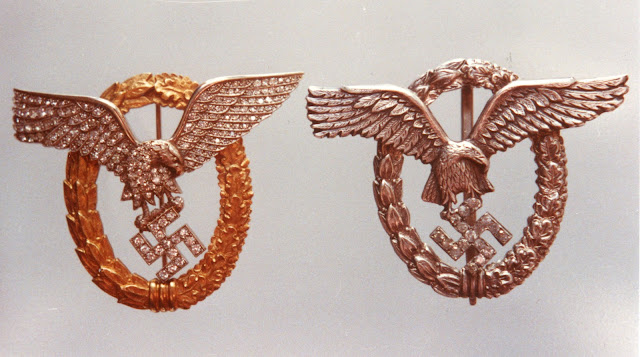 These pieces have been explained in lots of various ways. However comparring the original with the fancasy piece should leave no dought. 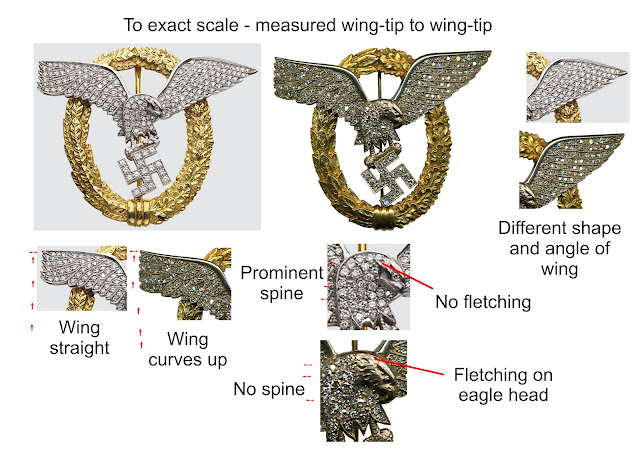 Posted by Christopher Ailsby at 07:11