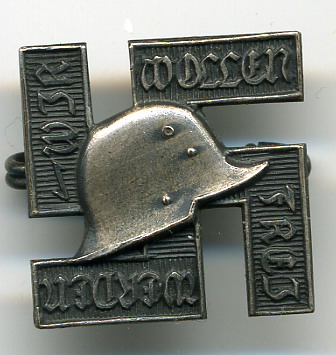 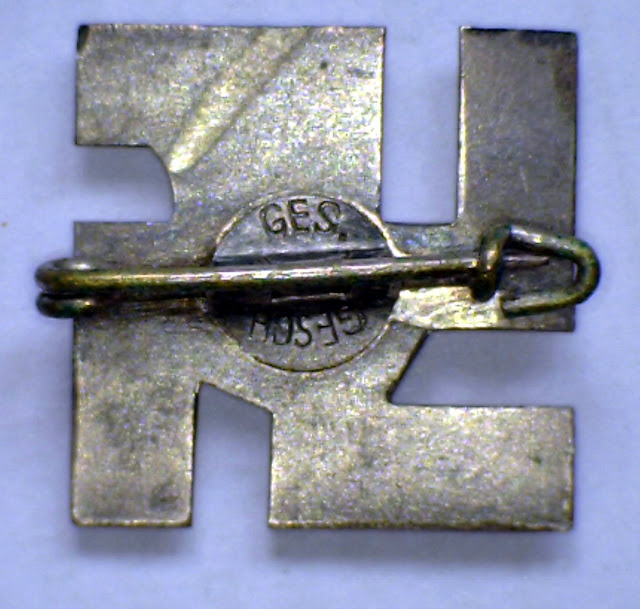 This badge comprises of a 20 mm swastika with the space between the legs being voided.  The legs have a small outer raised edge line that runs round the entire swastika.  The field produced has raised lines and on to these is superimposed, in raised Gothic script, started by a small raised Wolfsangel, 'WIR, WOLLEN, FREI, WERDEN,' which translates to, We Want to be Free.  At the centre of the swastika superimposed a three-dimensional German first world war steel helmet.

The reverse is flat with a round plate at the centre, that is bent in the middle to accommodate the fixing pin.  The central portion of the raised crease is cut away to expose the safety-pin.  This has stamped on to it, on the upper portion of the plate, 'Ges' with 'Gesch' on the lower segment.  On the upper arm can be stamped the maker's number, 21 or 63 and on the lower arm, the RZM logo. I have also seen unmarked pieces which look original as well as others marked "Z.M. OST" which I am less comfortable with.  The whole of the badge is constructed of white metal that is artificially patinated and was worn on the left breast pocket of the uniform. 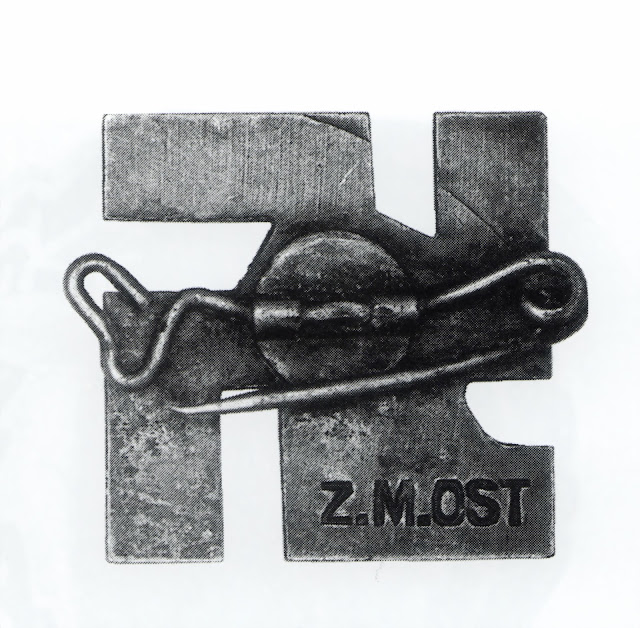 "Z.M. OST"
This award was instituted in 1932 by the SA - Gruppe - , as a party commemorative badge of honour for all those who had, prior to 31st December 1927;
a) Been a member of the Frontbann with a party number up to
50,000 and an unbroken record in the NSDAP.

b) From 9th November 1918, been a member of one of the uniform
right wing patriotic fronts and a member of the NSDAP without
unbroken service to 31st December 1927.

The badge was given official recognition as a party award in 1933.  They could be ordered from the company Eberhard Assmann upon production of a certificate signed by Gruppenfuehrer Ernst. The wearing of the Frontbannabzeichen without this certificate ,which should be glued into the Party book, was forbidden and punishable.

The Frontbann was founded on 31st May 1924 as a substitute for the SA which, at this time, was banned.  Units sprang up in different parts of with Frontbann - Nord being formed by Kurt Daluege in .  This was to become the basis of SA - Gruppe - - .  Their uniform was made up of a field grey tunic or 'wind jacket' buttoned to the neck, breeches, a Sam Browne belt, knee boots and a grey ski cap.  The arm band was the usual red brassard with white circle and black swastika with a steel helmet at its centre.  In all, the Frontbann had some 30,000 members.  Daluege went on to become Generaloberst der Ordnungspolizei.  He held this award, as well as Martin Bormann and Ortsgruppenleiter Emil Behrendt.

The award was made with a citation that was printed in Gothic script, 'BERECHTIGUNGSSCHEIN', beneath this are two faint lines, with the recipient's name hand enscribed on the top line.  Underneath the lower line, 'N.S.D.A.P. M. Nr.' and hand enscribed, the number, 'HAT DIE BERECHTIGUNG ZUM TRAGEN DER', then in bolder type, 'TRADITIONSNADEL ALTER KÄMPFER'.  This is underlined with a thick line.  Mid-way beneath this, '(FRONTBANN = ABZEICHEN).  Beneath, to the left, 'DER N.S.D.A.P.'  Beneath, and to the left, ', DEN', the date of award, in bold type, 'DER FÜHRER DER GRUPPE Bln. - '.  This has the oval stamp of the SA der NSDAP Gruppe - stamped upon it.  At the centre of the lower part of the document, 'GRUPPENFÜHRER', with the ink signature above it.

It is important at this point to expand on that which Dr. Klietmann stated about the badge no longer being authorised for wear by the end of 1934.  As the badges are produced with an RZM logo, and it was not until October 1934 that the Nazi party department of ordinance or Reichszeugmeisterei was established, this body exercised controls over the manufacture and letting of contracts that involved production of party related items.  Their München based central office, strictly related the manufacture quantities, distribution and criteria for award of all political awards.  It must be considered that these badges could have been produced for a while after October and the ordinance of 20th December 1934 can be interpreted to include tradition badges as being permitted, and this could have been the case until at least the order of 6th November 1936.  Therefore, the badges could have been worn for longer than has previously been attributed.

Klietmann wrote an article about these "Tradition" badges in OMJ No. 31 in 1997. He states that they were awarded to PG's with a number below 50,000 and whose membership record was unbroken as well as to members of nationalist organisations who had an unbroken membership from 9.11.1918 until 31.12.1927. 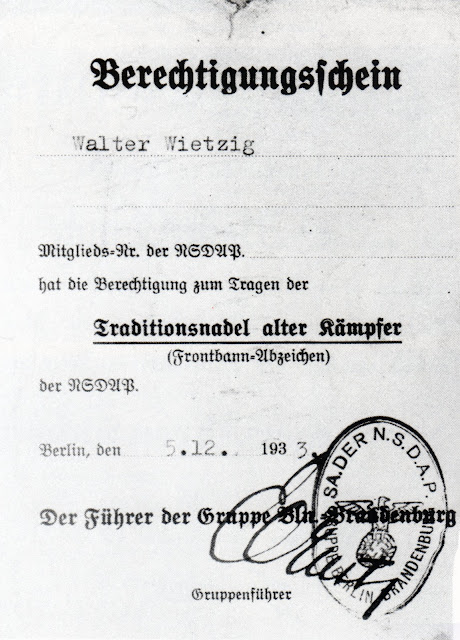 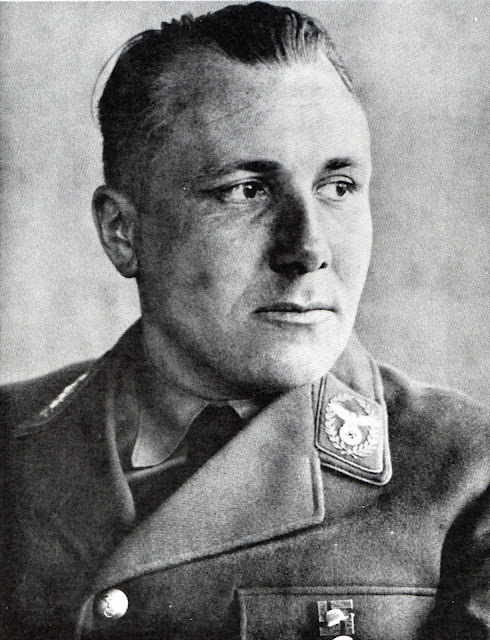 Born in Halberstadt in Lower Saxony.  His father died when he was four years old and his mother remarried a banker. In the closing months of the First World War he was called up as a gunner but did not see action.  After the war he was unemployed and then a steward on an estate.  He joined the Rossbach Freikorps and later the Frontbann, the paramilitary force organised by Röhm after the banning of the SA in 1923. He and Höß were jailed for the murder of Walter Kado, a teacher they claimed to be an informant in the French occupied Ruhr.  He was released in 1925 and he joined the NSDAP working first as head of the press service in Gau Thüringen, rising to become Gauleiter in 1928 before transferring to the staff of the supreme SA leadership towards the end of that year.  His fund-raising abilities became legendary and he was made party treasurer and Hitler’s intermediary to oversee the Adolf Hitler fund.  Donations and extortions were deposited into this fund and used for multi-various enterprises.  A rumour abounds that he paid off the police inspector investigating the death of Geli Raubal and then recruited him into the party.  He was none other than Gestapo Müller.  In September 1929 he married Gerda Buch who was, if possible, even more fanatical in her beliefs than her husband. Bormann hated everything about Walter Buch, her father, except for the Blood Order he held, a Nazi trapping he coveted and which Buch lorded over him.  On the 30 May 1938 Bormann was able to considerably expand the conditions for the award of the Blood Order, much to the dismay of the ‘Alter Kämpfer’s’.  These services were 1) to have received a death sentence, which was later commuted to life imprisonment, 2) to have served at least a one-year jail sentence for political crimes, 3) to have been severely wounded.  Thus, not eligible for his involvement in the Putsch, he was able to confer the award on himself under either clause 1 or 2.  His ambition had been fulfilled.  Hitler entrusted him to conduct his financial affairs and he was responsible for the rebuilding of the Berghof.  It has been theorised that he encouraged or facilitated Hess’s flight to Scotland in 1941.  On Hitler’s command, Hess’s office was renamed Parteikanzlei; he was promoted to head it and to chief of staff to the Führer’s deputy.  He also became a member of the council of minister’s for the defence of the Reich.  He possessed a ruthless and crafty mind and during the war he became an almost invisible courtesan who wielded enormous power.  He controlled access to Hitler after his appointment on the 12 April 1943 to the position of secretary to the Führer, even blocking access to the top leaders.  He was a true bureaucrat, someone whom Hitler relied on in most matters. He stood in the background, but was always ready to strike. Bormann had everything Hitler said put down on paper to be used later, if necessary, for the so-called “Fuhrerbevelen”, and in some respects was more powerful than Hitler was himself. All letters, reports, telegrams and telephone calls went to Bormann and he decided what or who was presented to Hitler. He had an elephantine memory. Hitler had an aversion to routine administrative work which Bormann took advantage of, gladly relieved Hitler of these unpleasant tasks. He kept silent about the situation in the bombed out German cities, and sent generals away who were unhappy about the course of the war in Russia. The Führer’s “creative work” was not to be disturbed by such “futility’s.” Hitler regarded him as the only close staff member who was capable of formulating his opinions and ideas in clear language.  Bormann could shorten entire books, thick reports or memoranda to a few sentences.  Hitler frequently sang the praises of his “brown eminence”. Hitler commented,” his reports are so perfectly detailed that I only have to sign them.  With Bormann I can work through a pile of dossiers in 10 minutes that would take hours with others.  When I say to him in the course of a conversation: “Remind me in six months of such and such an issue,” I can be sure he will do so on the appointed day.” He witnessed Hitler’s will and marriage and attempted to have Göring executed. He transmitted Dönitz’s succession as Führer and ordered the mass breakout from the bunker.  His fate is unknown but has been propagated that he died at the Lehrta Bridge.  An American investigator, McCabe, concluded that he could have committed suicide, been killed in Berlin, been a Russian or British agent, or escaped to Argentina.  He was tried in absentia at Nuremberg, found guilty and sentenced to death. 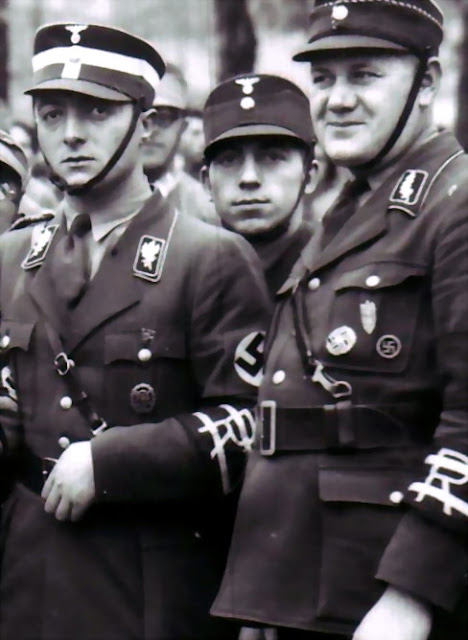 Born in Wilmersdorf, Berlin in 1904, he began his working life as a bouncer and Bell - boy in a prestidious restaurant frequented by intellectuals. He joined the Nazi party in 1923. He was extreemly good looking and Captain Ernst Röhm quickly added him to his  entourage of homosexual lovers. Ernst rose quickly through the ranks and was elected a delegate to the Reichstag in 1932. By 1934 he was an ﻿SA-Gruppenführerin charge of SA-Obergruppe 3. He was a victim of the Blood Purge of 1934. With his bride, he was heading for a Madeira honeymoon when members of the SS opened fire on his car. His bride was wounded and Ernst was knocked unconscious. He was flown back to Berlin and exected in the LAH barracks in Berlin - Lichterfelde.
Posted by Christopher Ailsby at 13:55