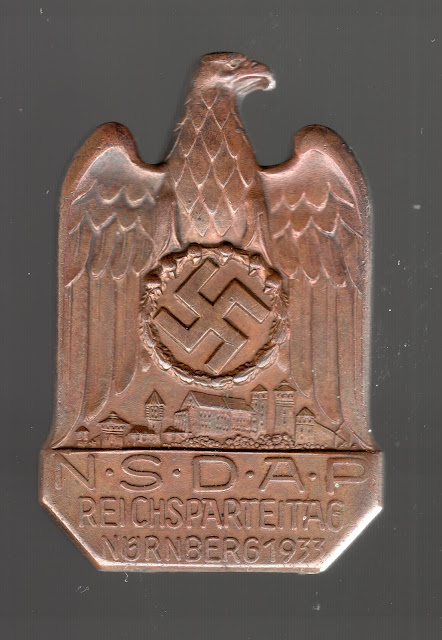 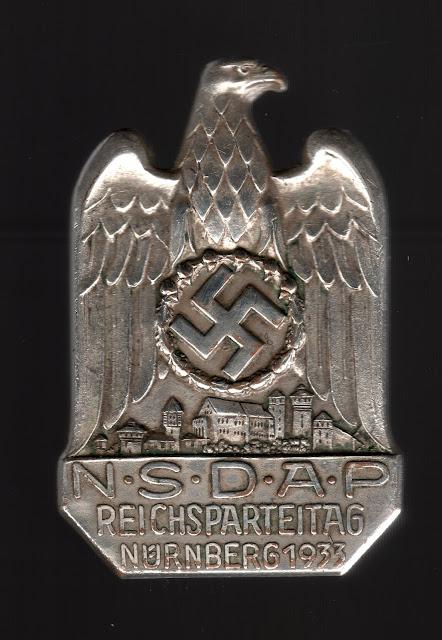 This badge is finely struck in bronze that is artificially patinated.  It is 52 mm high by 34 mm wide and the design comprises of a closed winged eagle holding a wreath of continuous small bunches of oak leaves.  There are three oak leaves in each bunch and ten bunches running visibly between the eagles talons.  These bunches measure 1 mm across.  The central field has a raised swastika.  The eagle and swastika surmount a view of the city of and its castle.  This design is placed just above a raised panel that has diagonal cuts at the bottom, which is squared off.  The panel has a three line inscription in raised capital letters of varying size, 'N.S.D.A.P, REICHSPARTEITAG, NÜRNBERG 1933.'

The reverse of the badge is flat with a vertical groove, into which a pin is inserted and then soldered in.

There is a badge that is produced from bronze and silver finished. Badges have been encountered that are produced in silver, with varying content from .900 to .1000. The originality of these is in some doubt. The purpose of the silver badge is unknown, possibly given to VIPs.

The 1929 Nürnberg rally was the last party day rally held until 1933.  This rally was held with the euphoria of the Nazis coming to power on 30th January 1933.  It was held on 31st August to 3rd September 1933 and was known as Parteitag des Sieger, or Victory Party Rally of the NSDAP in Nürnberg.  At this rally, Hitler formally recognised the Adolf Hitler SS Standart and the dedication of the SS Standarten took place.  This was formed from SS-Sonderkommando Zossen and SS Sonderkommando Jüterbog.  785 men of these two units were present and on the last day, a salutary round was fired by a Reichswehr battery.  Gruppenführer Sepp Dietrich received the banner with the name 'Adolf Hitler' on the box.  The two Sonderkommandos were granted the right to wear the name Adolf Hitler on an arm band on the left arm.  From this day forward the unit bore the designation, 'Adolf Hitler Standart'.  Hitler, at this time, was reviewing the necessity of the rowdy SA and its bombastic leader, Ernst Röhm.  The formation of this protection squad was a very important deviation from the normal growth and importance of the SA. 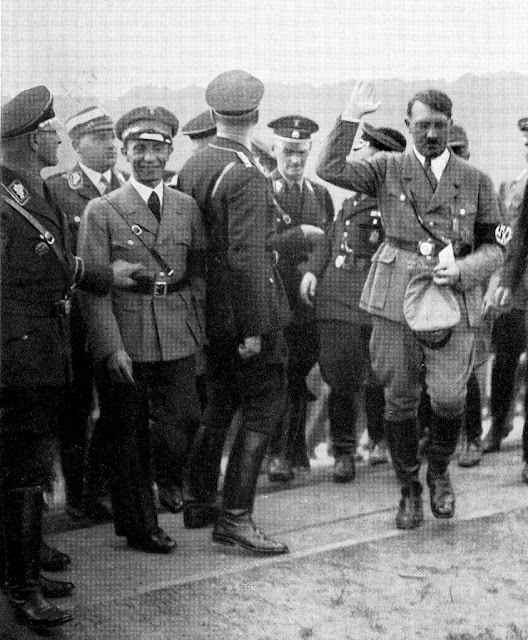 An SS officer accompanying Hitler, wearing the badge, and Goebbels at the festivities.

All in all, this rally was a very important event in the Nazi party history but up until now, nobody has recognised this Day Badge for the award it is, or certainly was.  For it was given official recognition as a decoration of the party under regulations governing the awards of the party and its form of dress, on 16th March 1935.  This order deals with the implementation of the laws as regards to the insidious attacks on the state and the party and with the protection of the party uniforms,

(Ref. RGB1, 1.S 387).  It continues, 'find enclosed all the articles listed under this order which belong to the party officially, flags and badges of the German National Socialist Workers Party and its affiliated associations', and lists these awards particularly, 'SA - Sportsabzeichen, Coburger Abzeichen, Abzeichen der Parteitag 1929 und 1933, Abzeichen des SA - Treffens Braunschweig'.  These are then followed by a second list of civil permitted badges of the party and its associates. This order reinforces that of 20th December 1934.

There is a further order on 14th November 1935 which does not specifically include the 1933 badge, but relates to 'Traditionsabzeichen' and the other awards of the party.

On 6th November 1936 Hitler introduced a further order that formalised the awards of the party and forbade the wearing on party uniforms badges that had, by tradition, become considered genuine party commemorative or honorary awards. 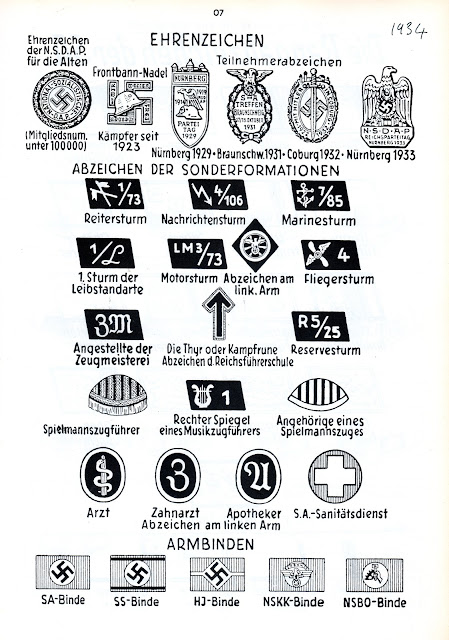 'They may be worn on the civilian overcoat or jacket by all party members on the left lapel.  All party members who were permitted to wear their party badge or the national emblem badges which were issued at the party gatherings may now not be worn at all, except that issued in the year 1929 but the ones which will be issued in future at such gatherings may only be worn for the duration of the gathering.  The wearing of club medals on duty or party uniform is herewith forbidden or any of the party's associated branches.'

The badge is seen being worn with other awards on period photographs from 1933 through to at least 1942.  This poses the problem of why is the 1933 party badge so worn?  Also in the Organisationsbuch der NSDAP, 1943 edition, there are three black and white illustrations of The Golden Party Badge, set centrally on a single page, The 1933 Party Day Badge, also set centrally on a single page and the Nürnberg 1929 Party Day Badge, with just a short paragraph above it, being used as the end of the introduction.  This could be purely and simply because it represents ten years of Naziism, which I feel is unlikely or that the badge had a greater signification in Nazi history.  The order of 6th November 1936 clearly states that, 'Ehrenzeichen der Partei' were permitted and this badge could have acquired the status of a 'Traditionsabzeichen'.