The Goethe Medal for Art and Sciences. 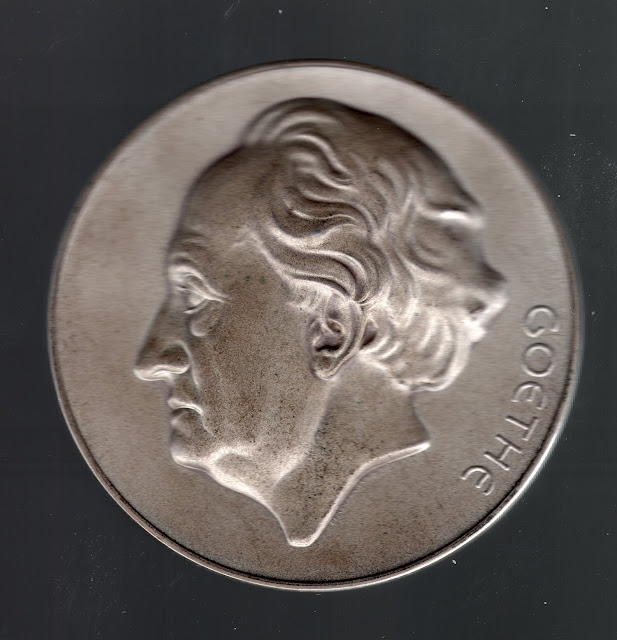 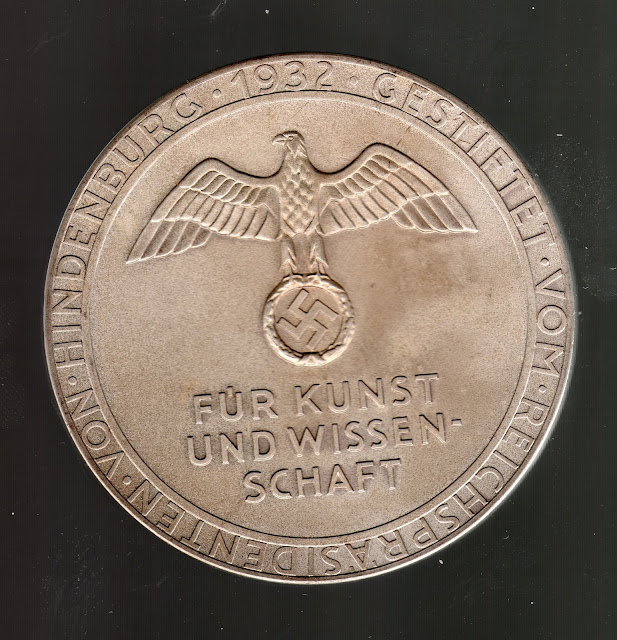 The Goethe Medal for Art and Science was founded in 1932 to reward outstanding service during the Goethe Centennial. It was initially intended to be a one time award but President Hindenburg retained it as a National award and this practice was continued by Hitler. The Goethe Medal continued to be awarded even after the introduction of the German Prize for Arts and Science in 1937, but took a subordinate position in relative merit.

The first type of medal was struck in silver, which was artificially patinated and had a diameter of 62 mm. It had on the obverse a raised edge line, onto the field at the centre was a raised head and shoulders profile of Goethe, with his hair wild, this depiction of him was from the period 1826. To the left in raised capital letters is Goethe.

On the reverse is again a raised edge line, inside this in the upper part is the inscription in raised capitals, Gestiftet im Goethe Jahr 1932, a pellet on either side separates the lower inscription, der Reichspraesident, which translates to, Founded in the Goethe year 1932 by the Reich President. Beneath at the top is a stylised Eagle with a three line inscription in raised capitals, Fuer Kunst, und, Wissenschaft. Under this is an oval ring. Too each side is the stamped letter W and R, the designer’s initials, Waldemar Raemisch. Around the edge, stamped in capital letters was the recipient’s name.

The second type, based on the first, lost its rustic appearance, and was a silver medallion measuring 70 mm with on the obverse a fine raised edge line and the raised profile of Goethe and the name Goethe in raised capital letters to the right. The profile was now just the head and had been softened and the expression aged. The sculptor Hanisch – Concee was responsible for the design of the medal. His signature is found immediately under the neck of Goethe.

On the reverse was a 1 mm raised edge line, indented by 3 mm was a further 1 mm line forming a tram line. Into this in raised capital letters is the inscription Gestiftet vom Reichspräsident von Hindenburg 1932. Founded by Reich President von Hindenburg 1932. Onto the central field is placed a raised stylised national emblem over the three inscription Fur Kunst und Wissenschaft. The medallion had an artificially added matt smoke effect.

The earlier produced medals had the recipients full name engraved in large block letters around the edge. The later pieces had the recipients name in small block letters preceded by the date of award. The proof mark 835 PR. ST. M. B. was also stamped in very small letters. It was presented in a square case that measured 122 mm, constructed from black simulated leather with an impressed gold line that ran round the edge, with an impressed gold national emblem at the centre. The inside had mauve blue vaulted base with recesses for the medallion and a mauve blue silk lid liner.
The recipient received with the medal a citation. The citation was presented in cream folder that had a large semi closed winged Eagle and swastika embossed in gold onto its centre. It was produced in thick paper, with printed text, that contained the recipients details and date which were hand written. The Embossed great seal of the Reich was placed on the right hand corner, with facsimile signature of Adolf Hitler as Reichschancellor or Führer and counter signed by Meissner.

As of 1st September1944 a total of 595 had been awarded. It was also awarded to no Germans; two examples are Geerto Aeilko Sebo Snijder. He was awarded with The Goethe medal in 1937. In November 1940 he joined the Dutch SS and the NSB in 1941 He was asked by Seys Inquart to found the "Cultuurkring". Intended for better cooperation with . He was one of the founders of de "Nederlandsche Duitsche Kultuurgemeenschap". Ernst Rüdin. He was the director of the one of the first eugenics research institutes, known as Kaiser Wilhelm Institute for Genealogy in . He also headed the Max Planck Institute for Brain Research in and the German Society for Rassenhygiene (Race-hygiene) and was one of the first members of the organization who attempted to educate the public on the "dangers" of heredity defectives and the value of the Nordic race as "culture creators." 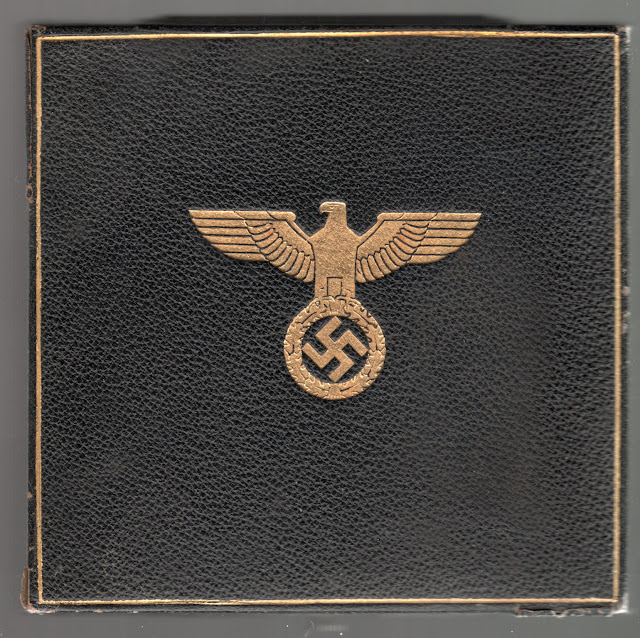 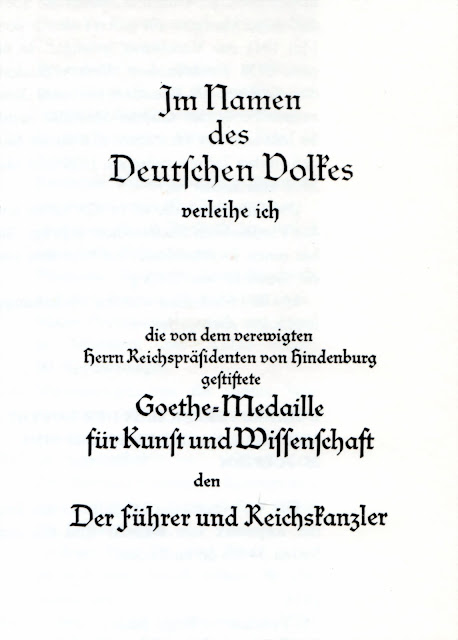 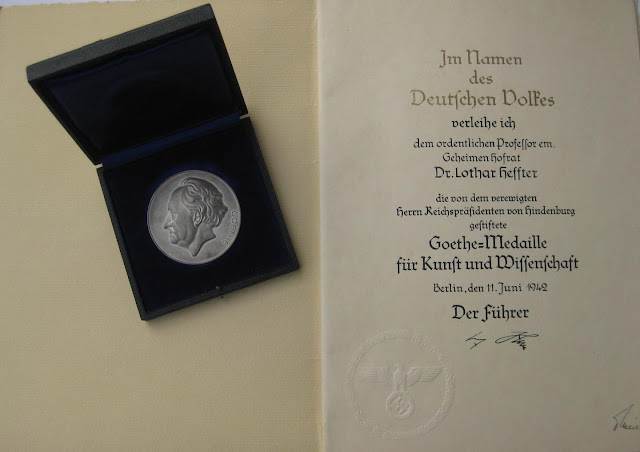 The Goethe Medal for Art and Sciences and Citation.
Posted by Christopher Ailsby at 09:32