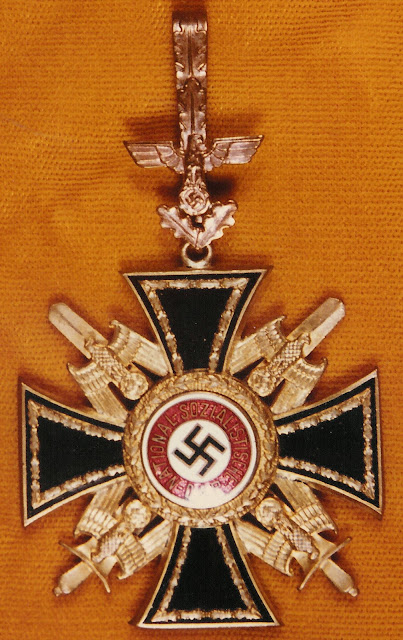 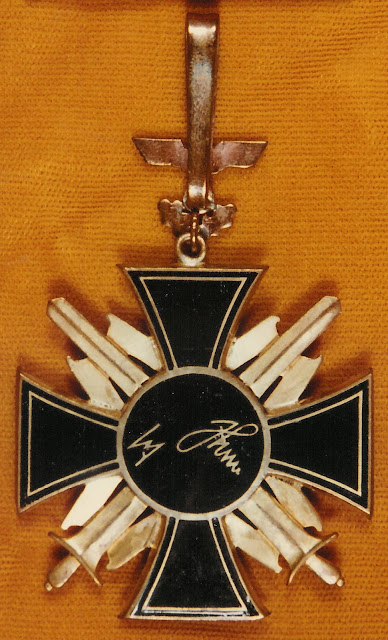 Through the angles of the cross and under the eagles are placed a pair of crossed swords.  These have a disproportionately broad blade that widens to the thin, upswept quillons.  The quillons measure 10.5 mm.  The handle is plain with a small round ball on the top that forms the pommel.  The swords measure 57 mm from tip to the top of the ball.

The most striking difference is observed on the reverse where the eagles are plain and the whole of the swords, that encompasses the broad blade with central spine.  The swords and reverse of the eagles are finished in matt gilt.  The neck ribbon is the same as described in The German Order - Golden Cross with Laurel Wreath and Swords 1st Class.

The presentation case is dark red and void of any distinctive markings.  The interior of the lid is white satin, while the lower section is burgundy velvet, which is compartmented to house the cross and the neck ribbon suspender.

The purpose of this award, if it was anything but a prototype, is unknown.  One theory that can be promulgated is that this grade could have been that awarded to Rudolf Schmundt and Josef Bürkel,  as their citations stated, "Die höchste Stufe des Groβdeutschen Ordens mit Schwertern", and, "Die höchste Stufe des Deutschen Ordens mit Schwertern".  The validity of this theory has yet to be tested and neither of the formal citation documents or the relevant orders awarded to these men has been observed.  So far, only one example of this type of order has been encountered and the theory is put for the student of history to consider.
Posted by Christopher Ailsby at 08:06