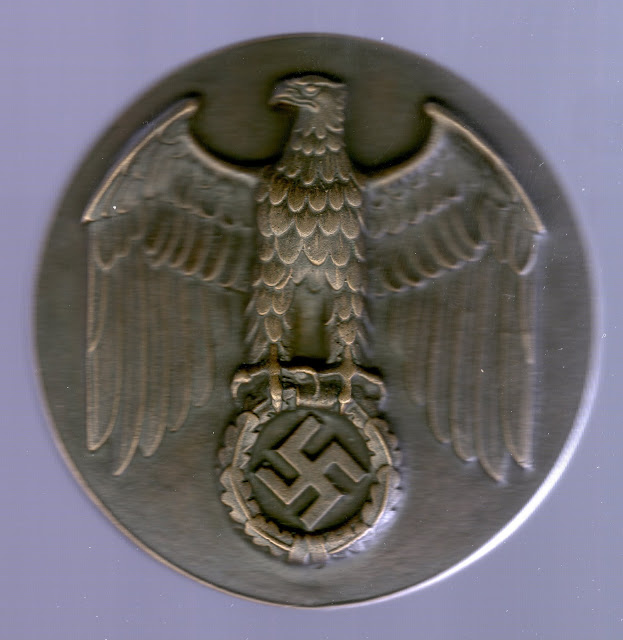 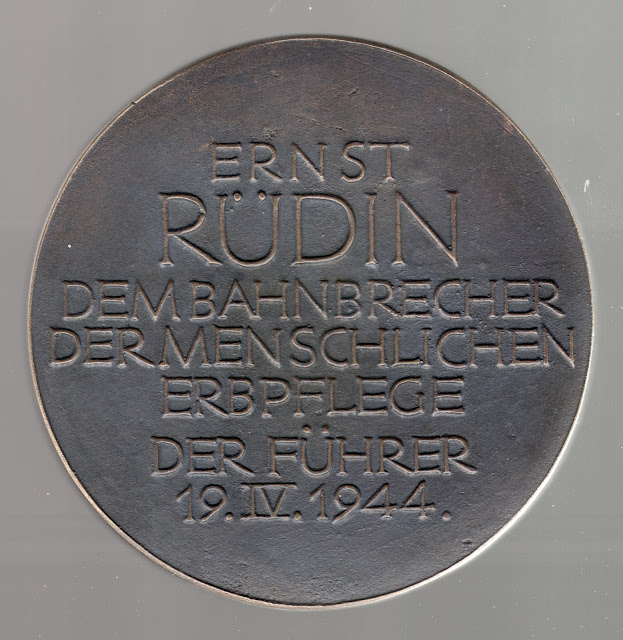 This award consists of a round bronze plaquet that measures 102 mm in diameter.  The obverse of the medallion has a small raised edge line and a flat field that has a large eagle clutching an oak leaf wreath, with a swastika within it.

The reverse has the recipient's name and exploit, along with the date of award, cast with the medallion in seven lines and executed in raised, capital letters. The shield was designed by H. Noack of . This medal is unique and presented to Ernst Rüdin on 19th April 1944, together with the Eagle Shield of Germany.  There is one other similar award, Die Adlerplakette des Deutschen Reiches 1925; this was given to Harry Plate.

The plaquet was presented in a hard hinged case covered in black simulated leather oilcloth that measured 205 mm by 180 mm by 40 mm. It has two elaborate hinge and hook catches produced in nickel silver.  The lid has a maroon silk liner and the lower compartment is maroon velvet that is recessed to take the plaquet.

He was one of the major representatives of German psychiatry, genetics, and eugenics in the first half of the twentieth century. Born in , he was influenced early on by his brother-in-law Alfred Ploetz, who propagated the ideas of social Darwinism and "racial hygiene" in after 1890. Rüdin began his career in psychiatry at Emil Kraepelin's clinic in , where he developed the concept of "empirical genetic prognosis" of mental disorders. He published his first results on the genetics of schizophrenia in 1916. From 1917-1945 Rüdin was director of the Genealogical-Demographic Department at the German Institute for Psychiatric Research, which Kraepelin had founded. After a short interruption from 1925-1928, Rüdin returned to and enlarged the department. After 1933 the National Socialist government and party endorsed Rüdin's work by supplying financial and manpower support. Nazi health policy required a scientific basis to justify its actions, and Rüdin's ideas corresponded partially with this kind of thinking. In 1934 he prepared the official commentary on the "Law for the Prevention of Genetically Diseased Offspring." The connections of Rüdin's department to National Socialism can be understood as one of the main reasons for the critical attitude towards psychiatric genetics in after 1945.
﻿
﻿

Posted by Christopher Ailsby at 07:08