Membership Badge of the German Academy for Aeronautical Research 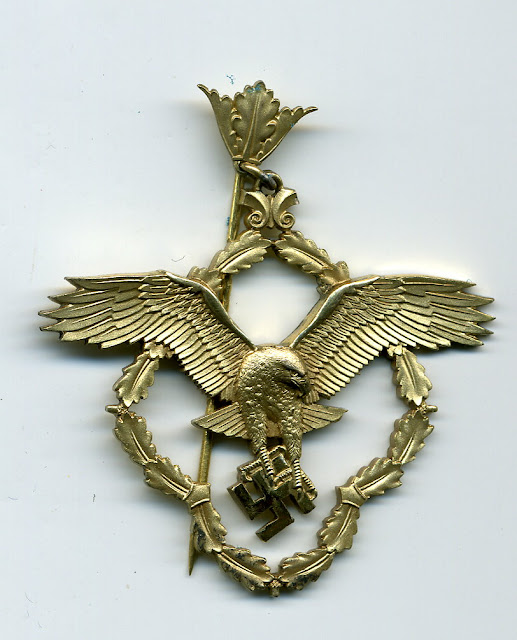 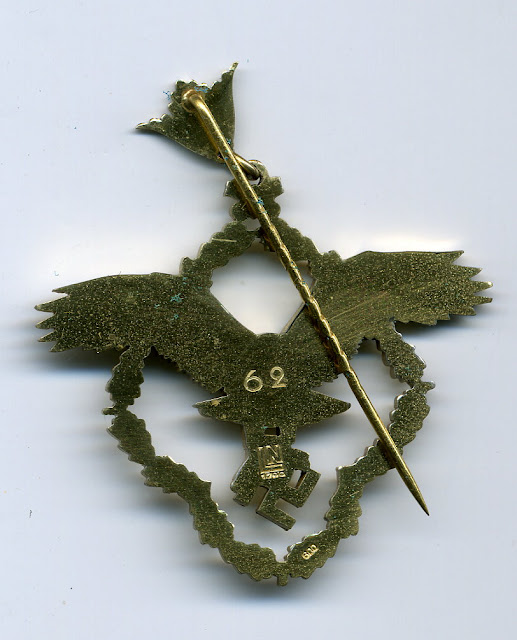 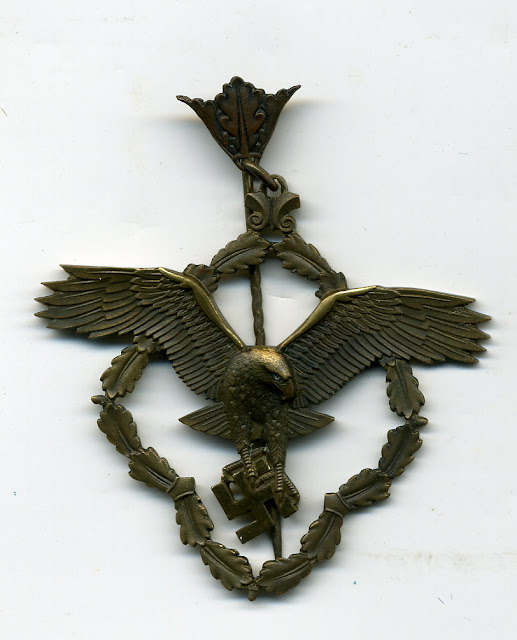 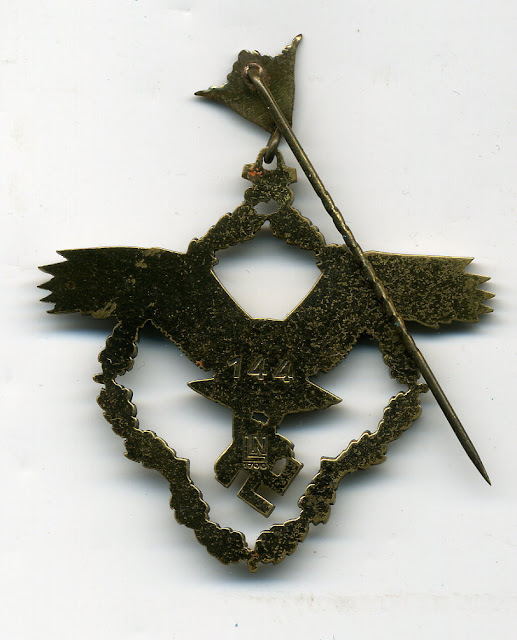 These badges are not, strictly speaking, a decoration or badge of honour but are on a par with that of the National Senate of Culture.  However, so prestigious were both these organisations, their awards gained the unofficial status of honour awards during the time of their existence.

The for Aeronautical Research was founded by Göring on 24 July 1936 by an order decreed at , with the principle idea of giving the crème de la crème of German aviation a platform for the exchange of information.  At the Ministry of Aviation, in its hall of honour, the president, Hermann Göring, emphatically stated that, 'the spirit of solidarity was an essential precondition for the reaching of the Academy's ambitious goals'.  Further in his comments, he made it abundantly clear that what he referred to as, 'the spirit of solidarity', was in fact National Socialists ethics and values.  The formation and infrastructure of the Academy perfectly suited the Nazis, as it enhanced a small élite core of scientists.  The ideal of, 'leadership' or more properly translated, 'domination', could not be fully imposed as this depended upon the scientists considering that this policy was advantageous.  According to the foundation decree, its role was to be of a purely scientific nature, results of research papers written on the field of aviation were to be presented to the academy by its members.  These papers were then to be translated into practical applications by others.  The scientific faculty for this purpose was the Lilienthal-Society for Aviation.  This, in organisational and infrastructural terms, represented the second tier at the apex of German aviation research.

In the early days of the academy, Göring and his Ministry of Aviation actively sponsored the academy in all its undertakings, holding flamboyant and extravagant functions which overshadowed the aims and activities of the academy.  Over the ensuing years, the ministry lessened its grip and, with the outbreak of war, the academy's work was discontinued.  In 1940, however, their work was recognised as being of the utmost importance and the research programme restarted with a fervent intensity but stripped of all the former social glamour.  Their researches were extended with exploration into the fields of rockets and nuclear power where its members broke new ground.  They also furthered development in piston as well as jet propulsion engines.  The problems encountered with high altitude flying and other forms of aviation related medicine, proceeded to a world wide supremacy.

At the general meeting of the Lilienthal-Society held in München on 12 to 14 October 1937, the new national emblem of the Aviation Research Institute was announced.  It comprised a large stylised eagle with its head facing to the viewer's right, with outstretched wings and a swastika grasped in both claws.  The eagle and swastika were then enclosed within a wreath comprising of twenty-four oak leaves.  The similarity between this and the Luftwaffe eagle symbolised the close association between the two organisations.  The academy was to be composed of sixty regular members and a total of one hundred associate, honorary, sponsoring and outstanding scientific members.  During the period between 1937 and 1942 the statutes governing membership were always compiled with and by the presidium and committee, whose members had to approve a nominee.  Göring, in 1936, proposed a purposeful restriction to the number of nominations.  He reasoned that aviation research, then in the elementary stages, was soon to place new and outstanding scientists in the forefront of technology.  These worthy scientists could then be nominated for membership prior to completion of the first five years existence of the academy.  Göring's proposal meant that a large number of positions were to be kept vacant in anticipation of the large number of research scientists who were to be nominated to the academy.  However, the expected technical scientists possessing 'great leadership potential' failed to materialise and earn their way into the academy with the result that, despite the great potential, the academy never had more than forty-five regular members.  The other category of membership including the 'group of one hundred' also stagnated.  There were only eighty-six members, including the foreign scientists.  It was not until an additional fifty-eight associate members of German nationality were nominated on 1 March 1942, that the academy achieved its statutory goal.  During the second world war, the names of foreign members did not appear on the membership roll, therefore new nominations were required to fill the gap between the actual and statutory number of members.

The academy had a total of 218 members during its existence and all were awarded badges consecutively numbered.  Each member received a full size and miniature badge bearing the same number.  These were first introduced at the beginning of January 1938 and were confirmed by an order outlining their design, dated 21 January 1938.  It also defined the three classes of membership and the colour of the award.  Honorary, ordinary and associate members received the badge in gold, supporting members in silver and corresponding members in bronze.  The large badge was, according to dress regulations, to be worn on the left lapel of the formal breast coat.  The miniature could be worn at any social gathering which was in accordance with, 'the dignity of the academy'.  On formal occasions members of the presidium, that was the president Hermann Göring (1937-1945), the vice-president Erhard Milch, (1937-1945), Willi Messerschmitt (1939-1944), Kurt Tank (1944-1945) and the chancellor Adolf Baeumker (1937-1945) were permitted to wear a chain of office signifying their position within the academy, in place of their gold badges.  The president's chain varied in design to that of the vice-president's, having a solid lower portion to which the insignia of the academy was appended, while that of the vice-president was an open worked scroll.  The chain was designed by Paul Casberg, the artist, who had his logo stamped on the reverse of the insignia suspension. 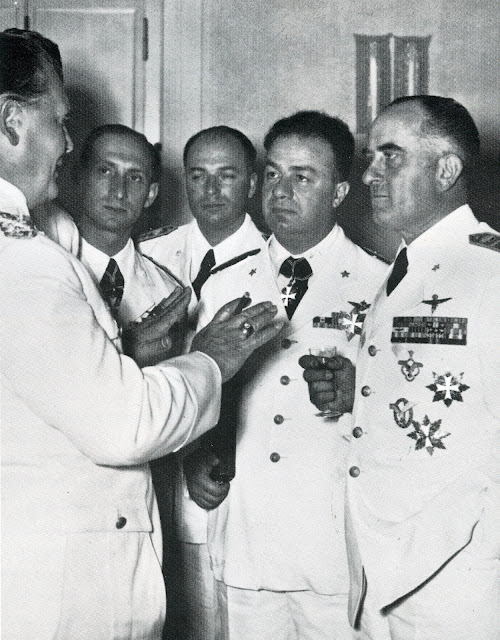 Italian Air Force General Valle and his Staff as guests of Hermann Göring  at Karinhall in 1939. Note Valle's pin on Membership Badge of the for Aeronautical Research takes the highest presedence. He has been awarded numerous German Decorations including the Combined Pilot observer badge with Diamonds the Grand Cross of the German Eagle order with and withought swords.

The membership badges were all identical in design.  This comprised of a large stylised eagle with its head facing to the viewer's right, with outstretched wings and a swastika grasped in both claws.  The eagle and swastika are enclosed within an irregular thin wreath, which is composed of sixteen single oak leaves, eight on each side in bunches of two, that meet tip to tip.  At these points in the lower portion of the wreath, they meet with single acorns and two bands.  The badge is 47.5 mm high and 37 mm across the widest point of the wreath.  The oak leaves making up the wreath measure 4 mm across.  The wingspan of the eagle is 51 mm while from the tip of the swastika to the top of the eagle's head is 22 mm.  The oak leaf cluster is 11 mm high and 13.5 mm wide.  These measurements are taken from the bronze award, while the silver gilded badges are slightly larger in the dimensions of the wreath and thickness of the badge.  The silver and gold class badges were produced in silver, the latter being gold plated, while the bronze class badges were cast in bronze.  The manufacturer, Laurer of Berlin and Nürnberg, went to great lengths to be extremely accurate in the production of these badges.  The large size badge has a finely chiseled pattern that is matted.  The overall finishes of all the grades of the award is artificial patination, with the leading edge of the wing and swastika being burnished.  In the bronze class badge this shows as gold.  The reverse is also burnished to a mirror-like finish, with the membership number and the logo of the company stamped into it.  The silver and gold badges have a small silver content number stamped on to the wreath at the lower right-hand position.  Again, in the case of the bronze class badge, the back is gold.  The badge is attached to a small oak leaf cluster by an oval ring, allowing the badge to swing freely.  To the back of the cluster is attached a needle pin.  Besides this form of badge, Laurer also produced another form of badge which was soldered directly to the oak leaf cluster, thus eliminating the swinging effect.  This was possibly because some of the recipients found it annoying to have to be constantly aware of the badge whenever they leant forwards. 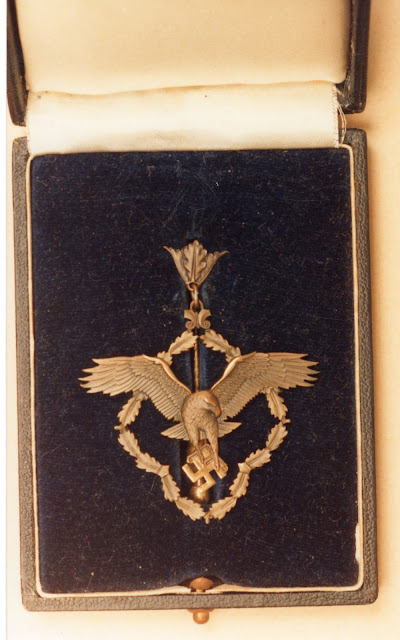 Membership Badge of the for Aeronautical Research
Corresponding Members Badge in Bronze in its case of issue. 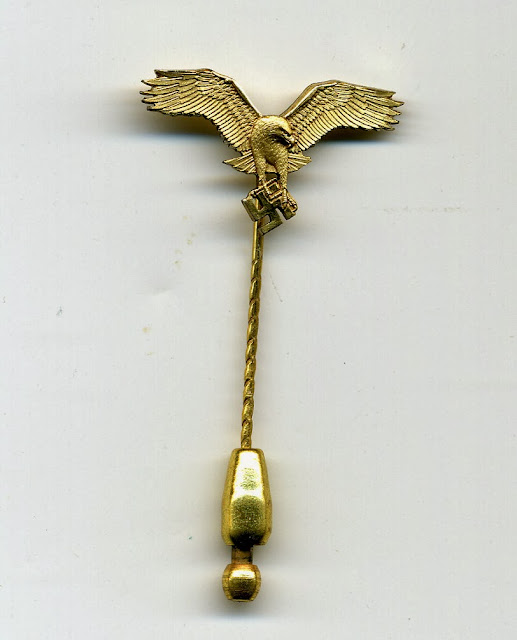 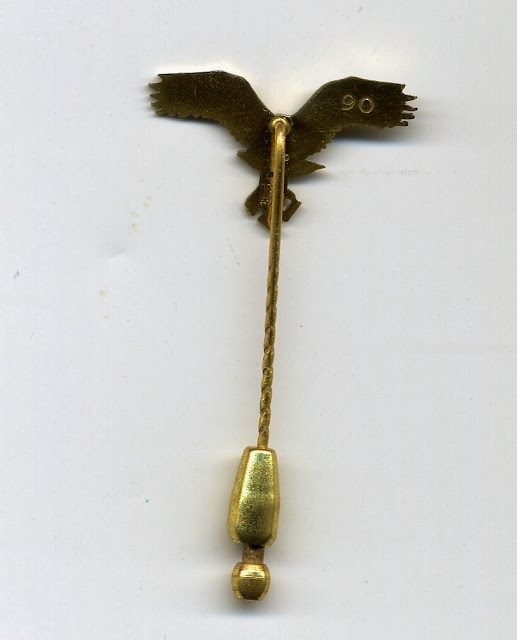 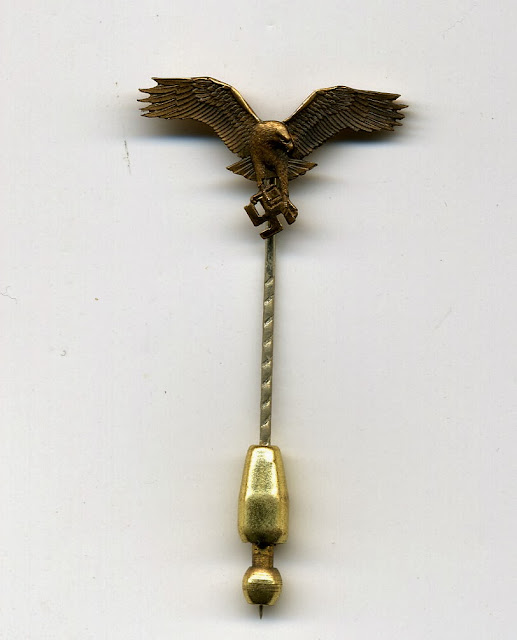 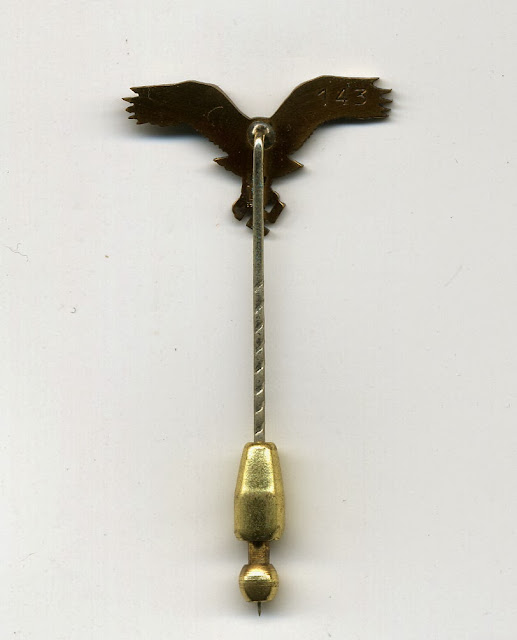 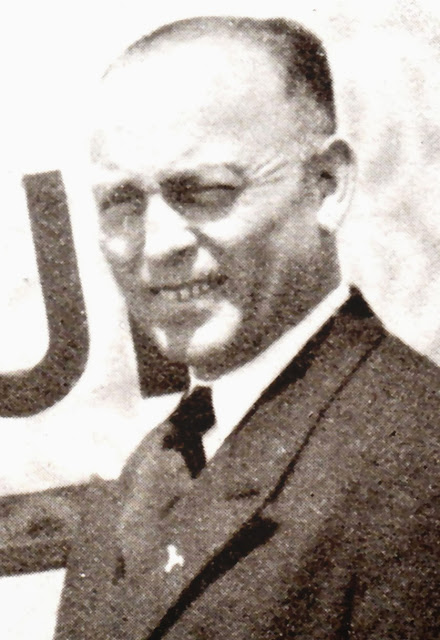 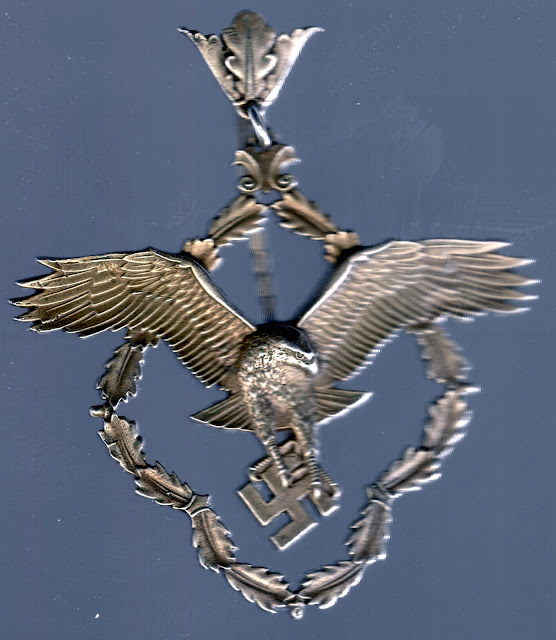 This badge was made from an original in the early 1980's. High grade dental moulding was employed to produce the casting mould. Although very crisp the badge lacks the extreme sharpness of the original. 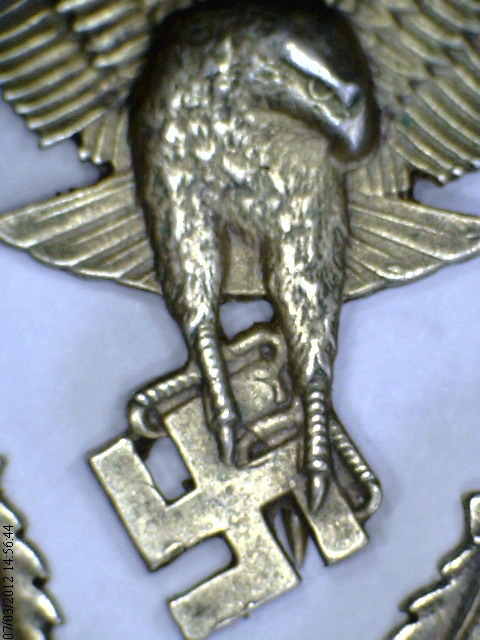 The high resolusion﻿ picture shows the lack of clarity and sharpness of the original. 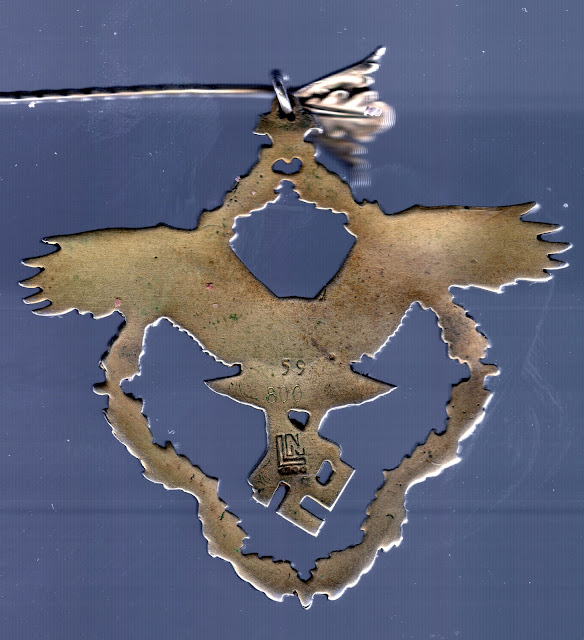 The reverse shows more than the obverse. It should be flat with a highly polished mirror service. The membership number is also incorrect. The silver content is positioned incorrectly and not of the normal font. The makers mark for the Firm Laurer is also not sharp as it has be included in the casting. 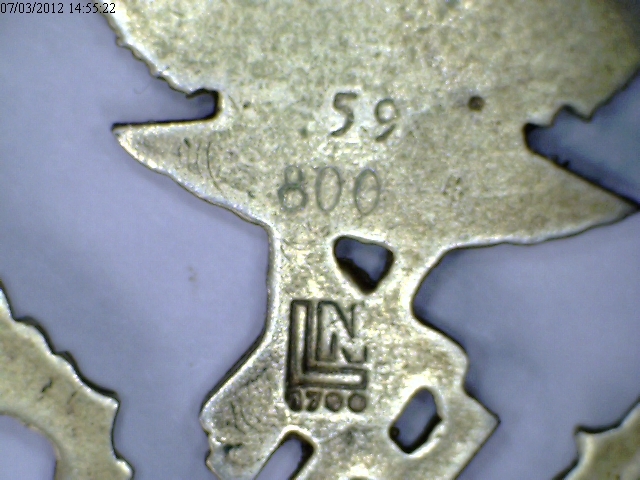 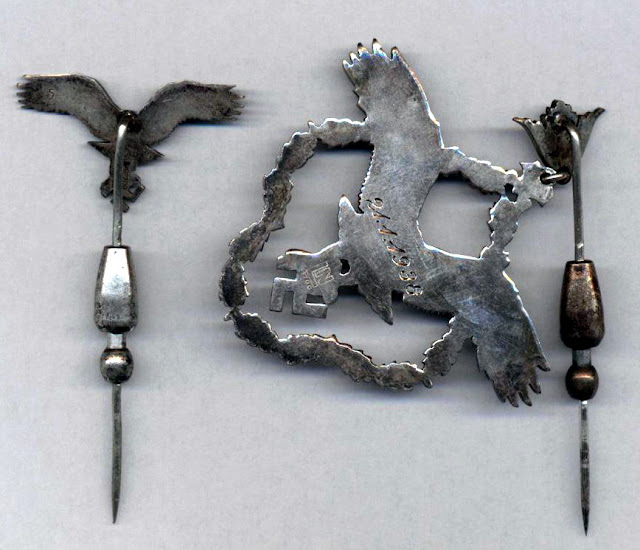 The enlarged view shows the problems more accurately once again. The reverse is not mirror finish, the edges of the badge are not crisp. The makers mark again is not correct.. The addition of the inscription, only gives creadance, or in this case cause for alarm.
Posted by Christopher Ailsby at 04:48